The ancestral Andean Amazonian wisdom is transmitted through songs, mythological stories, and the narratives of the wise men and women, whose message is the importance of generating,
preserving, and caring for life in its entirety.
The Ayahuasca ritual in the Peruvian Amazon and the preparation process of the aspiring Amazonian shaman.

The name ayahuasca is a compound word from the Quechua language where aya, means dead person and huasca rope, so ayahuasca can mean the rope of death or of the dead. Though in the Asheninka culture, this term means to be drunk or hallucinatory. Ayahuasca is a powerful hallucinogenic and healing potion, brewed by indigenous peoples of the Amazon rainforest, which was traditionally consumed by shamans for purposes of magic, divination, and healing.
They used this vine-shaped plant for divinatory purposes, by holding healing ceremonies; they used the medicine as a diagnostic tool to discover the roots of illnesses in their patients. 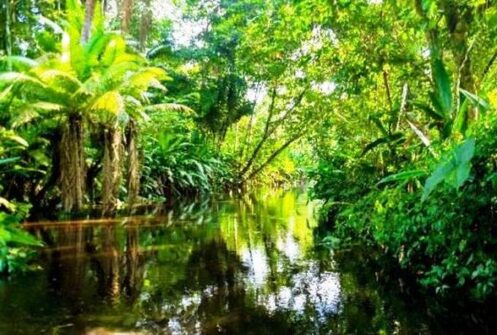 The Ayahuasca ritual
The Ayahuasca ritual is prepared and directed by a spiritual teacher or shaman, that is, by someone who has the knowledge of these things. That is why a shaman is in charge of collecting the ayahuasca plant and other ingredients. He decides where and when the brew will be prepared. By the day of the preparation of the concoction, the shaman is supposed to have all the ingredients ready. The ayahuasca stems are shredded into fine strips and are added to a pot of clean water along with their leaves, other herbs, and tree bark. All these ingredients are left to simmer until the concoction turns red, which takes between14 and 16 hours. Once it is ready, the concoction is left to cool and then it is filtered through a strainer and stored in a container for ritual consumption. 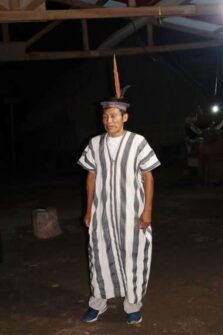 The consumption of the ayahuasca, which has been prepared by a shaman, generally takes place during night sessions. The shaman prepares a cosy environment in an ample space so that the participants in the ceremony can feel comfortable after having ingested the concoction. The shaman who leads the session begins to sing the icaros, which are healing songs that guide the effects of ayahuasca, known as dizziness. These ceremonial songs accompany the participants during their inner journey and are sung by the shamans during an Ayahuasca ceremony. The icaros are used for many purposes by the shamans but generally they are used to work with and direct the healing powers of the plant spirits.
At the same time, the shaman observes the different effects of the brew on the participants in the session. The ingestion of the ayahuasca causes different reactions: some of the participants begin to cry or to vomit, others have visions or experience imaginary journeys, during which they go back to the past or imagine meeting ancestral spirits. It is said that the effects of the ayahuasca brew can last between 6 to 12 hours. During that time the shaman accompanies and observes the participants. When the effects of the Ayahusca are over, the participants listen to the recommendations of the shaman and then go back home to rest. The ayahuasca ritual is considered the gateway to the world of plants and natural medicine; through it, one can learn the medicinal properties of plants and use them as therapeutic tools.

The preparation process of the aspiring Amazonian shaman
The person willing to become a shaman is supposed to undertake a preparation process. He must make a retreat in the depths of the jungle where he will learn the plant properties from his master shaman. He must remain in the jungle ingesting and getting to know medicinal plants. He will have to follow a diet that includes white rice, green bananas, and a type of fish only.
These foods will be cooked without salt or seasonings. Sugar is also forbidden in the diet of the aspiring shaman. 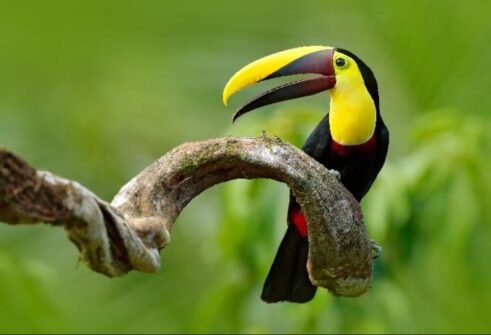 Furthermore, he is not supposed to meet anybody but his master shaman, because, for instance, if he came in touch with a woman who is menstruating, or with a sick person, or someone who has had sexual intercourse, his diet could be seriously affected. That is why diets are done in isolation. The ayahuasca ritual can be considered as the time to restore personal balance with the ancestral spirits and with the cosmos. The apprentice ritual therefore is considered an important step in the formation of the shaman who wants to learn to heal the brothers of his community in order to restore harmony with all creation. That is why the ayahuasca ritual has been transmitted orally and through practices from generation to generation for millennia. (Open Photo: 123rf.com)