The difficult journey of the Ethiopians of Jewish origin towards complete integration. Unifying music may help avoid discrimination.

Hidden among the Semien mountains in the north of Ethiopia, north-east of Gondar in the Amhara region, the Beta Israel or Falashas – as Ethiopian Jews were known – remained hidden from the rest of the Jewish diaspora until 1950. It was not until after the state of Israel had been created that they first heard talk of Zionism. Their isolation not only separated them from what was happening around them but the rest of the world had not even heard of them, which generated various theories as to their origin. On the one hand, the Christian version says that the Beta Israel are descendants of Melenik I, son of the Queen of Sheba and King Solomon. The Jews, on the other hand, believe they come from the tribe of Dan, one of the twelve tribes dispersed after the destruction of the second temple in 70 A.D. The Beta Israel were not officially recognised until 1975 after intensive research by the great Rabbi Ovadia Yosef. 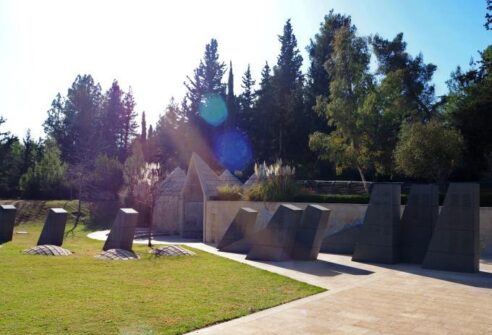 Memorial to the Ethiopian community on Mount Herzel, Jerusalem.

From that moment on, the Mossad and the Jewish Agency began to consider how they could save them from the drought and civil war that was then devastating Ethiopia. The first large-scale operation, known as Operation Moses, was organised in 1984. Due to Soviet influence in Ethiopia which forbade any aid from Israel, the rescue was carried out in absolute secrecy between the government of Israel, the United States and the Sudanese security forces where thousands of Ethiopian Jews were waiting in refugee camps. 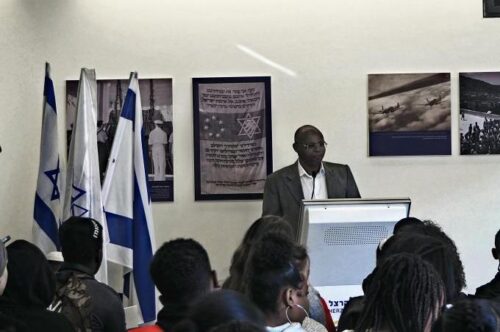 Over 45 days, 6,364 people were moved from Sudan to Israel. A further 1,000 were left in Sudan after the Arab countries rebuked the government of Khartoum for helping Israel and around 4,000 of them died during the journey from Ethiopia to Sudan.
Operation Moses was certainly the largest epic migratory movement ever, even though it was not the one that moved the largest number of people to Israel. According to the Jewish Agency, since 1948 around 92,000 Falasha took part in initiatives such as Operation Solomon (1991) or Operation Alas de Paloma (2010-2013). At present, there are 150,000 Jews of Ethiopian origin in Israel.

Integration and education
To narrow the gap between the Ethiopian community and other Israelis, in 2001 the Ethiopian National Project (ENP), an organisation whose main aim is education, was set up.
“About 80% of the Ethiopians in Israel are under forty years of age. We are a young community and education is the only way to change our situation so we can contribute to the development of our new country”, states Roni Akale, director of the ENP and of Ethiopian origin.
However, the struggle for equality is not confined to educational and professional matters but also concerns culture and religion. In their isolation in the mountains, the Falasha remained anchored to their ancient Jewish customs and were not aware of modern celebrations. “The first time in my life I heard any mention of Hanukkah – known as the Festival of Lights – was in Israel”, explains Daniel Sahalo, who together with his family left his village in Ethiopia and went to Sudan. 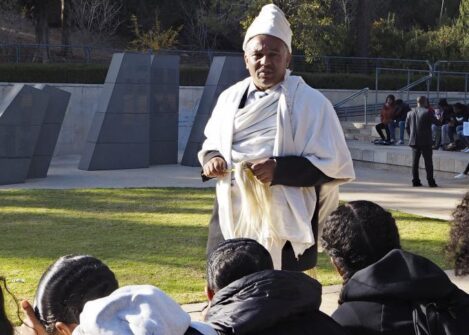 A Kessim explains to young Ethiopians the origins of his community and the journey to reach Israel.

It is also true that the Falashas have retained some of their feasts which, after much trying, they succeeded in introducing to Israel. In 2008, the festival of Sigd, during which the Ethiopians renew their devotion to God, was recognised, followed in 2018 by the figure of the kessim, equivalent to that of a rabbi.
Despite everything, the gap between the Ethiopian community and the rest of the Jews is still evident. Some Falasha born in Israel feel discrimination because of their colour. Their main complaint is that the police use unnecessary force against them which has led to many protests in recent years. Racism is clearly present in Israeli society. Sahalo believes that “young Israelis do not understand that this is the first time that such a large number of Africans are welcomed in the West as brothers and not as slaves”.

To the rhythm of the music
There are, nevertheless, some things common to all. Such as the fact that other Israelis know very little about their community and the change that could help to eliminate racism. Atakilt Tesfame, from Gondar, believes that all they know is some stereotypes that do not correspond to reality, while Roni Akale complains that people only talk about Ethiopians when there are disturbances or when they appear in the newspapers. Nevertheless, some changes are taking place. Gastronomy – Ethiopian restaurants are to be found everywhere in the streets of Israeli cities – and especially music are creating ties between the two groups. Whereas until recently Ethiopian artistes were barely able to make a living on the Israeli musical scene, today they are among its leaders. 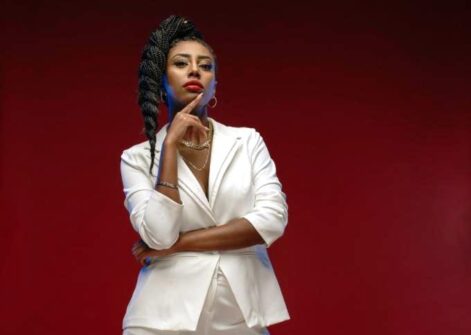 “The first generation of people coming from Ethiopia occupied a very marginal niche in Israeli society but that very difficult situation, as well as the cases of racism that we suffered for years, made us all the stronger. The second generation has succeeded in carving out a very broad niche in the world of music”, explains Yael Mentesnot, a 28 year-old singer. He is just one of the many artistes of Ethiopian origin such as Gili Yalo, Aveva Dasa and ADL who became stars in Israel in general and especially in their own community. “Ethiopian children and youth regard us as their idols and have great respect for us. They know all our songs and want to make it themselves”, Mentesnot says. Despite this, he insists on the fact that his music is not aimed at the Afro community but the whole world because “my movements follow different styles and my lyrics speak of everything: the body, money, love … and the world can identify with them”.
In the same vein, the singer explains that even if some composers use music to condemn the situation of Ethiopians in Israel, she prefers to sing about love and to get everyone to dance. Her aim is to create ties and establish contacts between the two sides and this seems to get results: Israeli society seems to become daily more receptive to hearing Ethiopian performers.