The most important period of the year for Orthodox Christians in Ethiopia is the Lent fast leading up to the Easter feast. Easter, known as Fasika, will fall on 2 May this year corresponding to 24th Miyazya 2014 in the Ethiopian Calendar.

Fasting is central to Ethiopian Orthodox Christianity with some 250 fasting days during the year, about 180 considered obligatory and the others only for the clergy. During these days no meat, milk products, or eggs are consumed. The Lenten fast, known as Abiy Tsom or Great fast, is the longest continuous fasting period, lasting 55 days.
Although Lent is a period of abstinence from animal products, the diet involves a wide range of dishes. Typical dishes include Siljo, made with beans or peas with mustard and pepper, Shembera made from lumps of ground chickpeas in a hot stew and hi/bet, a light creamy mixture made from lentils with fenugreek and sesame oil. Throughout Lent solemn hymns are sung accompanied by a lyre-like instrument called begena. 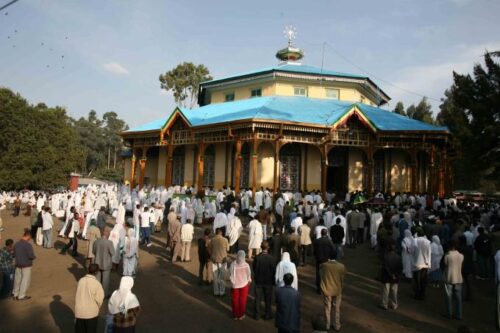 The Easter cycle includes five of the nine major feasts in the Ethiopian Church calendar. Establishing the date of the moveable feast of Easter was a major preoccupation of early Church scholars, involving complex calculations based on 19-year lunar and 253-year solar cycles determined by Babylonian and Greek astronomers, set out in handy tables. The calendar, of Alexandrine origin, was instituted by Augustus in 30 BC, modifying the ancient Egyptian calendar. Church scholars first sought to establish the date of the fast of Nineveh commemorating a sixth century plague, ensuring that this took place in the first three days of the second week preceding Lent, 10 weeks before Easter.
The calculations guaranteed that Lent begins on a Monday, and that Easter is later than the spring equinox, falls on Sunday, and does not coincide with the Jewish festival of Passover, as enjoined by the Fitha Negest. The last Sunday before Lent when people enjoy a feast with meat dishes is called Qibela, meaning ‘reception’, ushering in the period of repentance and fasting. The seven Sundays preceding Easter have names based on texts read during services. 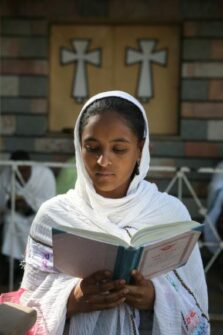 The final ‘Week of Pains’ is marked by 10 services every day called ‘hours’ with specified readings from the Psalms, Gospels, Miracles of Jesus and Mary, hymns and poetry recitals. During this period no baptism, absolution for deaths or saints day commemorations take place, and people are expected to refrain from heavy manual work. The Holy Week begins with Palm Sunday, Hosana, commemorating the entrance of Christ into Jerusalem. Palm branches are blessed by priests and distributed: in Aksum. For example, they are carried by a mule, symbolising Jesus’ riding a donkey into Jerusalem. Many people, especially children, plait palm leaves into headbands or rings, sometimes in a crucifix form.
Each day has a special name, starting with Passover Monday, recalling the People of Israel crossing the Red Sea. On Maundy Thursday, unleavened bread is used during the service, and the head priest sitting on a stool with a towel around his waist washes the feet of the clergy in imitation of Christ washing his disciples’ feet. A dish called gulban is prepared from maize, millet, dried peas or beans, mixed and crushed in a wooden mortar, beaten and boiled in an earthen pot.
On Thursday and Friday people go to church and perform prostrations, called sigdet, the number assigned by the priests depending on confessions. The climax of the Holy Week is the period of complete fasting from Thursday night for the priests or Friday morning for the laity until the cock crows on Sunday morning and the announcement
of Christ’s Resurrection. 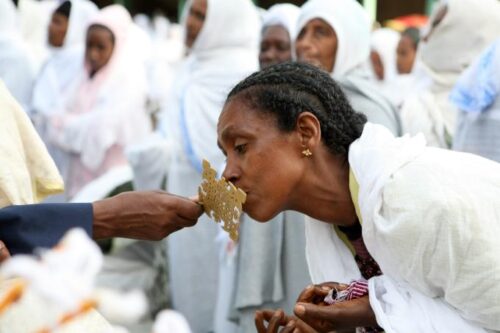 On Good Friday churches are decorated with hangings and brocades, and the crucifix is covered by a curtain. A representation of the body of Christ is placed in front of the sanctuary with flowers, incense and candles. Readings from the Old Testament and Christ ‘s life are read out every hour announced by a deacon’s bell-ringing. A censor attached to a string is agitated before the Gospel readings, symbolising Jesus being pulled and pushed by the Jews.
At the 11th hour, deacons in a circle perform a ceremony cursing Judas, one holding a stick with a candle at its tip, which they strike, extinguishing the light, symbolising defeating Judas and the Devil. Priests then walk in procession three times around the altar holding candles, censors, umbrellas and crosses while a deacon rings a bell. At that point drums are heard for the first time since Palm Sunday, and the priests break into triumphant dancing and singing, swaying in unison with their sticks and sistra. Thereafter priests strike the faithful on their backs with olive branches or a whip, commemorating the Flagellation of Christ, and the faithful confess sins.
Early on the morning of Holy Saturday, known as Kidame Seur, or ‘Abolition of the Sabbath’, work can be resumed in preparation for the Easter feast; people wash themselves and their clothes, and a Service of Peace is held. Deacons bake loaves, bring them out covered with cloth, priests bless and cut them for distribution. Priests and deacons, donned in their most splendid ceremonial vestments, carrying crosses and umbrellas, visit houses of the faithful ringing bells and giving people blessed reeds exchanged with gifts for the Church. People decorate their houses with fresh grass on the floors, symbolising joy and fertility. 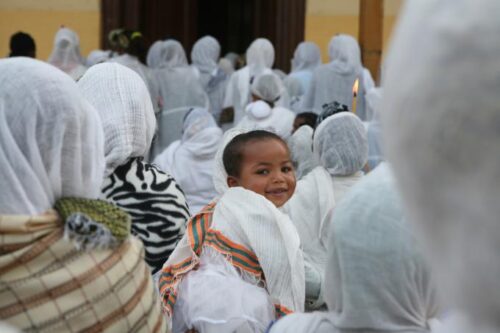 During the Easter Vigil on Saturday night the altar is covered with sumptuous cloth, the entire Book of Revelation is read and priests and deacons sing and dance with their sticks, sistra, drums and bells. As the Resurrection is proclaimed the sanctuary doors are opened, the curtains removed, wax tapers are lit representing the descent of heavenly light, and deacons chant in front of the open sanctuary doors: “The Lord rose up as though awakening from sleep like a mighty man aroused by wine”.
Drums are beaten, the congregation claps, and women ululate. The congregation follows the priestly procession three times around the altar singing ‘Send your light upon us who believe in your Resurrection!’
Finally, the head priest utters the words: “Christ is risen from the dead” to which the congregation answers: “With great power and authority”. The priest continues: “He bound the Devil” and the people respond: “He set Adam free”. To the Priest’s statement “Peace”, the people add: “From now onwards”, and when the Priest concludes: “It is so” the people proclaim: “Joy and Peace” . 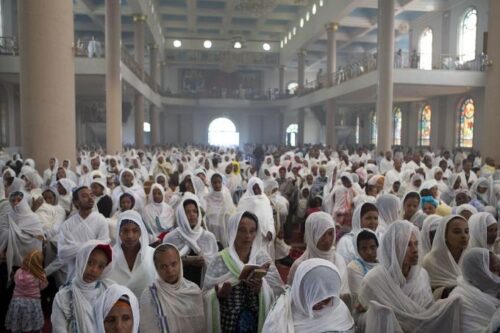 The Easter Liturgy follows after midnight and the service is concluded around 3 am. Fasika evokes the joy of breaking the fast; the verb Feseke is used by extension breaking other fasts, and the term Fisik for non-fasting days and foods. On return from church in the early hours of Easter Sunday people break their fast with a mixture of linseed, honey and water or milk, easing digestion.
In the morning the Easter bread is ceremonially blessed and cut by a priest or elder. People feast on doro wot, spicy hot chicken stew with boiled eggs, and for those who can afford it, mutton or beef, sometimes neighbours clubbing together to slaughter an ox. Fasika is a day of relaxation and feasting when friends send each other messages or letters, and nowadays text messages, with expressions such as: ‘Rejoice, for He has brought you the Light of his Resurrection’, or ‘Congratulations, for He has freed you from the bridle of fasting’. The festive mood continues until the following Sunday named Dagme Tensae, the Second Resurrection, when the main wedding season begins. After the long Lenten period Wednesday and Friday fasting is cancelled for 50 days until Pentecost.