This internal lake of Ethiopia is an Alpine circle of muddy waters, more than three thousand five hundred square km. This is where, forming a slow and calm stream, the Blue Nile rises. Lake Tana is a sacred boundary, a frontier of Christianity.

Almost all of the thirty seven islands conceal a monastery, a church and an Orthodox hermitage. Most of the churches of Lake Tana are round with a conical roof (like the traditional Ethiopian churches). The larger circle, the cloister, with either wood or cement columns, is usually open towards the outside while on the inside, in concentric circles, we find the presbytery and the drum, with walls often decorated with paintings. With its twenty-eight square pillars connected by round arches, one of the noblest examples of this type of architecture is the church of Kebran Gabriel, located on the suggestive island of Kebran at the southern point of the lake, facing the city of Bahir Dar. 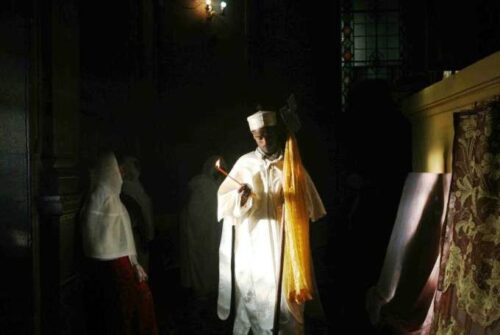 Kebran Gabriel is one of the monasteries founded in the fourteenth century. The large elliptical church, dedicated to the Archangel Gabriel, was built on the level summit of the island. The Archangel Uriel – guardian of the gates of Paradise – managed to intercept a lightning bolt that was about to burn up the great church of the Ura Khidanemehret Sanctuary dedicated to Our Lady. Dek, at the centre of the lake, is the largest island. The church of Narga Selassie, the basilica of the Trinity of Narga, known as the sanctuary of honey, rises on a rocky isthmus on its western shores. On the island of Kebrar, there are now almost seventy monks whereas in the past it had as many as five hundred. The life of the monks is a simple one: in Kebran, where women are not allowed, the young men eat once a day in common while the older monks usually take their food in their little houses, fasting frequently. 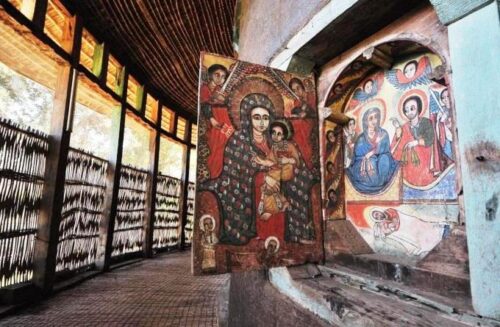 These little islands are the strongholds of evangelisation in Ethiopia, unassailable refuges during the centuries of the Muslim incursions. Tana Kirkos, for example, is an island far distant from the reassuring port of Bahir Dar. It is a solitary island, forbidden to women. It is like a rocky claw along the north-east shore of the lake. Here, according to legend, it is said that the Virgin Mary took refuge during the flight into Egypt. Here, according to the accounts of the monks, the Arc of the Covenant was preserved after it was taken from Jerusalem. 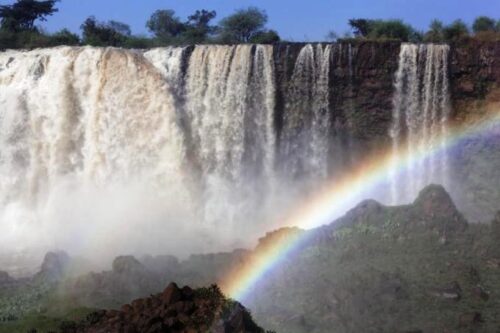 At about thirty kilometres from Bahir Dar we can view the great spectacle of the Nile. The Blue Nile, after its quiet exit from Lake Tana, confines itself in a narrow gorge, digging its path through the rock, seeking an outlet towards its counterpart as it descends the immense savannahs of Sudan. The Ethiopian Nile, with no further delay, makes the great leap of Tis Issat, the Blue Nile Falls, where its waters seem to take flight, transforming themselves into ‘the smoke of a great fire’ (this is what its name means in Amharic).
At the end of the rainy season, during the first months of the Ethiopian autumn, the Blue Nile Falls are impressive: almost a kilometre and a half wide, a wall of water crashing down.  In some places the waterfall is forty five metres high. (C.M)