Two Comboni missionary sisters from DR Congo share their experience.  Compassion, commitment, and hope are the ways they share their life with people.

My name is Sr. Bernadette Idey, my missionary vocation brought me to live in the Middle East, Zambia, Kenya, and the Democratic Republic of Congo, my native country, where I have been for five years now. I live in Mungbere, a town situated 138 km from Isiro, the capital of the new province of Haut-Uélé, in the north of the country.
Mungbere stands at a crossroads between important cities such as Isiro, Wamba, Mambasa, Watsa and Dungu. It has more than 20,000 inhabitants belonging to different ethnic groups: Mvu, Budu, Logo, Zande, Mangbetu, Yogo, Lokele, Luba, Boa, Mbuza and Hema. There is also a considerable number of pygmies who here are called bambote. Many other people have been coming here to work in the fields or cattle rearing, to engage in commerce, to have better access to health care and education or to escape from places where security was not guaranteed. With so many languages being spoken, French is still the official language, though Lingala is the medium in daily use.
Most of the people are Catholics though there are some who belong to other Christian denominations and there is also a Muslim minority. 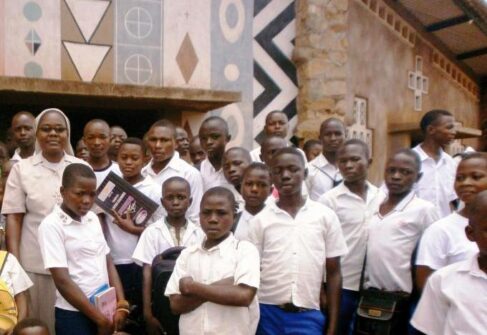 The parish of Our Lady Consoler of the Afflicted, is part of the diocese of Wamba and administered by the Comboni Missionaries. The parish has a number of primary schools – including one just for pygmies – three secondary schools, a hospital which is also run by the Comboni Missionaries, and social structures for the promotion of women.
I am the headmistress and a teacher at the Mavuno Institute, one of the Catholic High Schools. My job is to plan and coordinate the curriculum and extra-curricular activities. My responsibilities also include supervising all the teachers and the students who aspire to taking up teaching in primary schools. Teaching provides me with an opportunity to keep in contact with young people. They sometimes need someone to listen to them, and the fact that I am an African and Congolese Sister helps them to trust me. They feel at ease with me and they sometimes share their anxieties, sorrows and joys. I am here to instil in them human, moral, Christian, and professional values and I endeavour to create a favourable environment for their development.
Compassion for children coming from areas of violence encourages me to welcome them and enrol them in school, sometimes contrary to school regulations. I see them as ‘lost sheep’ who have a right to education. This educational pastoral is a vocation that requires much patience, flexibility, availability, sacrifice, faith, and love but also firmness in facing up to certain situations. The best thing of all is being surrounded by young people who give me the joy of living. 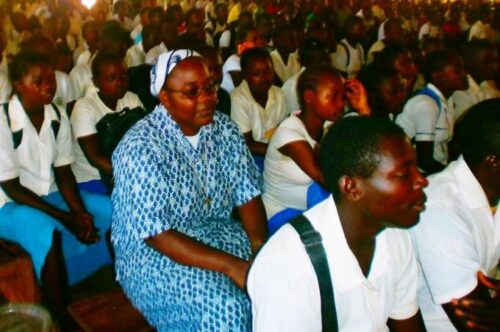 In the rural and multicultural context of our school, I try to promote unity in diversity, religious tolerance, mutual respect, and the family spirit. We pay particular attention to the education of the girls, and especially that of the Pygmy minority since they are quite vulnerable and easily tend to abandon the school.
I encourage them to persevere in their studies as it is not easy for them to integrate into a structured educational system.
Despite everything, there are some reasons for optimism. Last year, for the first time in the history of the Institute, we had a Pygmy candidate for the state exams, which he passed. It was a cause of great joy for all of us and I hope it may serve as an example and inspiration for the other Pygmy students still attending the school.
One of my joys is to see how an increasing number of girls succeed in finishing secondary school, with good results in the state exams at the end. Those fortunate enough to go on to university are doing well and this is very encouraging. Only a few years ago, the girls would study much less than the boys and often gave up their lessons while still very young.Finally, I believe the Mission is everywhere. I am happy with my work in the field of education since it provides me with a vast field of apostolate and the opportunity to spend time with people of different social levels, sharing their sorrows and their joys.

Living with the people.
From Africa to Latin America. Continuing my studies in Mexico and now living in Texas. I am Sr. Isabelle Kahambu Valinande, a Congolese sister.   After my religious profession, I was assigned to Mexico where I lived for nine years in three different places. I spent a year in Guadalajara working with the sick and elderly as well as in the parish. In Costa Chica, in the state of Oaxaca, I devoted two years to African-Mexican youth ministry. That was a beautiful experience during which I felt the joy of missionary life. It taught me to allow myself to be guided and I learned much from the young people. It also allowed me to really get inside the reality of the country and to open myself up to what was new and different while sharing what was mine. The diocese of Puerto Escondido did not have sufficient pastoral agents, too few priests and, as a result, many young people were not being sufficiently assisted. Our parish in Huaxolotitlán had about 32 communities and just one priest who could not visit all the places during the year. The communities, therefore, organised the celebration of their faith themselves. I was one of four Sisters and we shared the territory of the parish among ourselves. While accompanying the people, I was deeply moved by their testimony of faith.
I must admit that this situation surprised me, knowing that Mexico is a country with more than 500 years of evangelisation. In my diocese of Butembo-Beni there are many priests and religious congregations. Even though it is not long since the coming of the Gospel, there are pastoral agents trained to accompany the Christian communities and the celebrations are very impressive.
In Costa Chica I had to turn my hand to all sorts of work. On Sundays, I would go to different communities for the celebration of the Word of God. I was also deeply moved by the celebration of funerals. 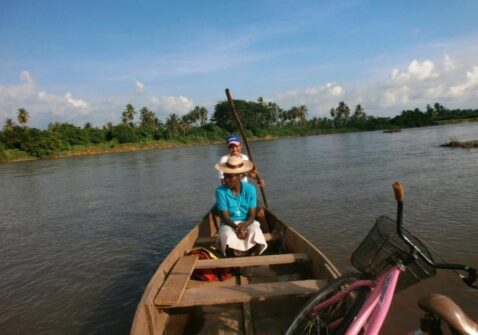 Traditionally, the dead are not buried without a blessing so the people go in search of a priest, a sister or a catechist. They say these people are ‘closer to God’ and that the prayers and blessings bring the deceased person close to God. They have one ritual which is a mixture of African and indigenous traditions. As soon as a person dies, while the body is still warm, they place it on the ground in contact with Mother Earth. “From the earth they come and to the Earth they return”, they say. When the body is cold, they believe that Mother Earth has received it. They then adorn the place with marigold flowers and lime, placing the dead person on a bed in preparation for the vigil after which they go to the chapel, something sacred for Catholics, and carry out the burial. The community then gathers to share food. The communities where I worked also have the custom of having a novena of prayers for the happy repose of the deceased. I appreciated very much this way of celebrating the life and death of people. 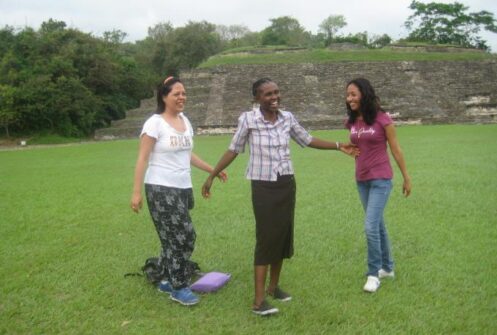 Lastly, I lived in Mexico City for six years. There, while studying Religious Sciences, I dedicated myself to missionary animation and ministering to migrants. At the Casa Mambre, I helped them with their administrative formalities and to study the language, especially those coming from Africa. At the Cafemir Centre, I collaborated in the psycho-spiritual accompaniment and manual therapy for migrants to facilitate their social integration. I am now in the United States where we are going to open a community in Texas to continue our work with the youth and migrants. (C.C.)