The sun is about to set behind the houses that, in the distance, appear on the opposite side of the bay from the small port of Soumbédioune, when Madj adjusts his hat and waves to his friend Bouba.

It is the signal to set sail. It is time to load the latest equipment on board and, with a tireless collective movement, slide the pirogue from the beach until it touches the Atlantic Ocean.
Many, like Madj and Bouba, hurry to leave the shore before evening falls. The crossing in the open sea, with its big long waves that lift the fragile wooden boats from below, takes only about ten minutes. 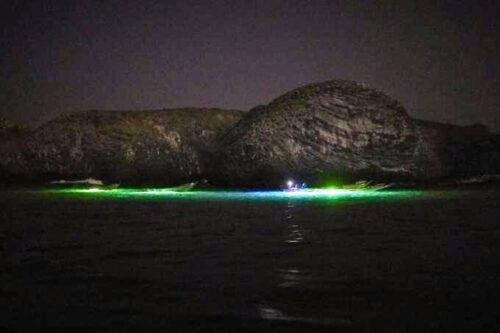 Madj and Bouba circumnavigate the island to reach one of the best squid fishing areas: the bay of the inlet that penetrates the southwestern side of the island.

The ancient engine, with Bouba at the helm and Madj at the bow, coughing over the whistling of the wind and the crying of the seagulls. The spikes of the rugged cliff of Sarpan Island appear before their eyes like the back of a dinosaur lying in the water. The Madeleine Islands are an archipelago made up of two volcanic rock formations, Sarpan and Lougne, which is only a few miles off the west coast of Dakar.
Followed on sight by several other pirogues, Madj and Bouba circumnavigate the island to reach one of the best squid fishing areas: the bay of the inlet that penetrates the southwestern side of the island. 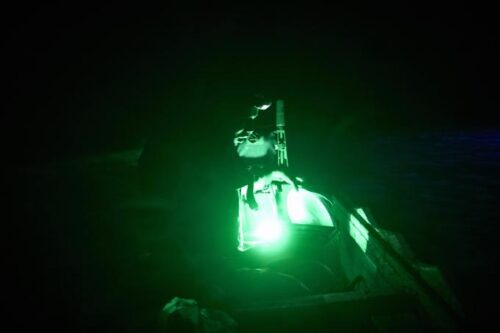 “The colour depends on the moon. When there is a full moon, we put the red LEDs and create a shadowy space” say Madj.

After careful observation of the seabed, Madj drops anchor, trying to predict where the wind will rise from during the night. Meanwhile, Bouba, still aft, fiddles with a 12-volt battery, torches and electric cables. This type of traditional fishing is practised with the help of lamps lowered a few meters deep to attract fry and nocturnal predators, such as squid. “Once upon a time people used to fish with fires lit on boats. I saw it done when I was a child. Today, however, we use coloured Chinese LEDs”, says Madj.
In a matter of minutes, the last lights of the day give way to a disarming darkness. The sounds and glares of nearby Dakar are lost beyond the cliff. Under each canoe shaken by the current, the ocean lights up with blue and green lights. “The colour depends on the moon. When there is a full moon, we put the red LEDs and create a shadowy space”. A surreal atmosphere, accompanied by the powerful cry of flocks of birds perched on the wall of the island. (Photos: Michele Cattani) – (AdG)