A captivating shade of red dominates the modern building, which expands into geometric and irregular shapes, next to the mythical Jabulani amphitheatre. It was there that Zindzi Mandela read the speech “My father says …”, it was 1985, when his father, Nelson Mandela, rejected the offer of parole from the South African government, which maintained the regime of ethnic segregation and banned the African National Congress. Huge tarpaulins frame the external space. This is the Soweto Theatre. Since its creation in May 2012 – as a legacy of the new buildings included in the 2010 Soccer World Cup project – the Soweto Theatre has maintained the long and rich African tradition of community theatre, adapting to the needs of society, while also displaying the entrepreneurial spirit of street vendors and hosting important commercial events. 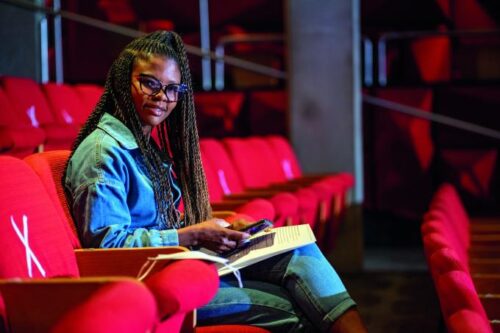 The infrastructure is part of a municipal body by which, as explained by Kosi Ndesi, director of marketing, from one of the three indoor theatres it hosts, the programming is coordinated with the other theatres in the city of Johannesburg and gives space to the spontaneous proposals of the public. “I came when the Soweto Theatre had only been running for two years, intending to develop a space that would explore the enormous creative potential of Soweto’s youth. Every administrative division of South Africa should have a place like this. At first, they only received proposals, but there was no proactive action to create a program”, Ndesi says, ensuring that his department is a bridge between those with an artistic idea and the theatre administration, so that, in addition to the possibility of renting the space, even those who have no resources feel that the place belongs to them.

Obligatory remembrance
Soweto is a township adjoining Johannesburg, established in 1963 to bring together a series of townships for blacks under one administration. A lot has changed since South Africa became a democracy, but the past is still very much present.
The forced deportations that populated what was an inhospitable place on the outskirts of the big city between 1952 and 1957, as well as its transformation into an icon of the struggle against apartheid, make it almost impossible that the artistic activities presented at the Soweto Theatre do not still have a strong political and demanding content. 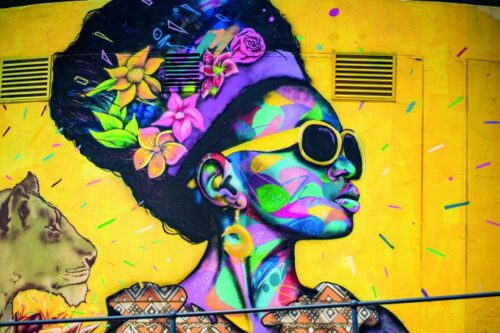 “It is a beautiful space, with an attractive architectural design and with the right infrastructure. The theatre has become a great need for the community because Soweto is a very rich and lively place in terms of culture in all disciplines, from music to cinema, to dance … in any creative project. It is a theatre that accepts the challenges posed by the creative community and also by our young entrepreneurs. It allows them to socialise because being an entrepreneur does not only mean creating a business but also developing it socially and commercially, learning to sell their works of art”, explains Ndesi, expanding the concept of ‘theatre’ to a real meeting point, where experiences can be lived in community. “The Jabulani amphitheatre has hosted political rallies, concerts and religious celebrations; it has been a melting pot of cultures and creativity, even in the difficult moments of our recent history”, a spirit that, according to Ndesi, has also been adopted by the Soweto theatre which has taken on the memory of recent history, and allows him to work with greater determination, especially in what concerns the young people, the first generation of adults who have not experienced the atrocities of apartheid. The theatre receives almost fifty proposals a year and nearly half of them are re-presented. “One of the highlights of the Soweto Theatre was the celebration of the Hugh Masekela Legacy Festival in November 2019, shortly after his death,” recalls Kosi Ndesi. 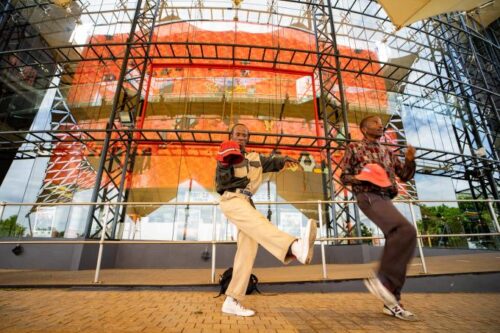 Masekela was a composer, trumpeter, and singer. He distinguished himself for his jazz compositions and for writing anti-apartheid songs like ‘Soweto Blues’ and ‘Bring Him Back Home’. He was a patriot and a friend of the Soweto Theatre. Much more than an artist, he had a great affection for this space; he cared about its development and that of the young people who lived around him in this community. He had a great interest in bringing young people closer to art and creativity. We have transformed the space for this festival, to host several shows at the same time”, says Ndesi.
The most successful events are those suitable for families, such as the Seven Colour Sunday Event, a food market held on the last Sunday of each month, where Soweto chefs compete with their best dishes. Some of them have their own small restaurant businesses and find room to expand their circle of consumers. Families are encouraged to bring their children, who are admitted free. During the month of March – which in South Africa is the month of the celebration of human rights – the Soweto Theatre concentrates its activities in schools and childcare centres, to plant the seeds of theatre, music, and dance in children. “We try to make sure that when they finish school, they have visited the Soweto Theatre at least four times. We create a habit because they start coming at age three. We hope they see it as their own space”, says Ndesi. The final activity consists of a session of the Constitutional Court, in which the children take on the role of judges, prosecutors, witnesses, lawyers etc. “In everything we plan, education goes hand in hand with fun and vice versa”, says Ndesi. 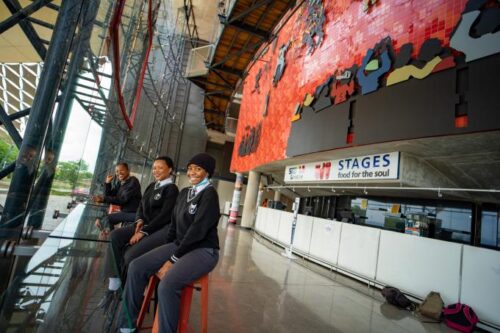 June is Youth Month and the Soweto Theatre takes the opportunity to host shows that are inspired by the meaning of freedom for today’s youth. The life of the Soweto Theatre is made up of a strategy shared with the community, in which everyone wins: the Soweto Theatre, because it performs the socio-cultural function for which it was created, as a laboratory for creative development; and the community because it grows around it, as a space for meeting and consolidating ways of life. Soon, the theatre will also be a space for conferences, award ceremonies, and meetings. It will be a space open to all those interested in the creativity that transforms the world. (Open Photo: Exterior entrance to The Soweto Theatre at night time.123rf.com)