With a new Apostolic Letter Antiquum Ministerium (Ancient Ministry), Pope Francis establishes the lay ministry of catechist. In Africa catechists have been the cornerstone of the church. We present three stories of the catechists in South Sudan, where they have been important actors in the work of evangelisation.

The beginning of the Catholic Church in the rural areas of Nuerland, in Western Upper Nile, in South Sudan is unique.  Hundreds of catechists worked by themselves for nearly 25 years without the presence of missionaries among them. James Duol Kai is considered the father and the founder of the Catholic Church in Nuerland.  He was born in 1940 in Tiam, in Leer County.  During the first Anyanya war, James Duol lived with his family in Malakal. He was working as a guard in the prison of that town. One day, some civilians, Dinka men, were put in prison and they were sentenced to death. 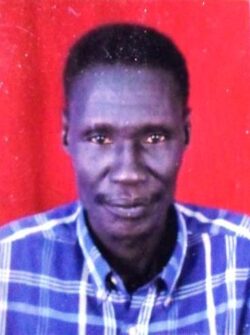 James Duol Kai is considered the father and the founder of the Catholic Church in Nuerland.

When James came to know of this, he helped them to escape. He was discovered and put in prison. He was transferred to the prison of Port Sudan to complete his sentence there. While in jail, he met Fr. Peter, a Catholic priest, who was the chaplain of the prison. He talked to him about God, Jesus and the Catholic faith. When his prison term was almost ended, Fr. Peter told him to go to the Comboni Missionaries in Khartoum and ask for help. He gave him a letter of recommendation.  He went to Khartoum and joined the Sergi Club where Comboni Brother Sergi helped him find a job. A few months later, he joined the catechumenate. He was baptised on 16 January, 1961. He received the sacrament of confirmation on Christmas Day the same year. He married in the Church with his wife. Soon after, he went back to Adok and he became a trader.  Due to the war, he was forced to go back to Khartoum again where he kept in touch with Brother Sergi.
At the end of the war, towards the end of 1972, he returned to Adok again, this time determined to teach the Catholic faith to the Nuer in his hometown.  He started gathering some people in his house together with his wife and children. After a while, other Catholics who came from Khartoum joined them. 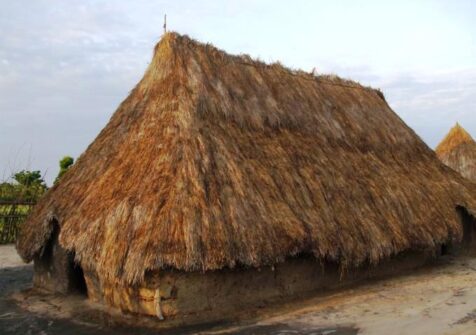 The congregation increased as did the catechumenate. His house was no longer suitable and, in 1974, they built their church with the cooperation of all.  In 1977, his own congregation chose him to be their catechist. James taught them for about two years and was then faced with a problem: he had catechumens ready to be baptised but there was no Catholic priest to baptise them. He was not discouraged by this situation. In 1979, he decided to go to Malakal and reported to Monsignor Vincent Mojwok, the Bishop of the diocese of Malakal, the number of catechumens who were ready for baptism.
Bishop Vincent gave him the authorisation to baptise and appointed him leader of the Catholic Church in the area of Adok.
Among the newly-converted Catholics he chose the best and appointed them as catechists and sent them to teach all over Western Upper Nile. He also became an itinerant catechist. 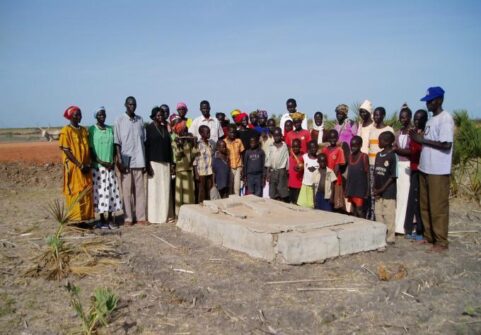 James Duol Kai’s tomb. Every year, November 7, the Catholic community of the parish gather to commemorate the Father of their Church.

In 1979, Catechist James created a committee to coordinate the work of evangelisation, to organize the program for baptisms and to liaise with the diocese of Malakal. While he was visiting one of the community, he was killed on 7 November, 1991 near Adok in cross-fire between two rebel factions. He is buried in the compound of the Catholic Church in Liap, in Adok. Today, the Catholics of the rural areas of Western Upper Nile remember him as the founder and the father of the Catholic Church in their territory. The catechetical centre of Saint Joseph’s Parish was named after him to acknowledge the work he did for the evangelisation of the Nuer and the foundation of the Church in rural Western Nuer.

Wherever she went she worked in the Church.
Women have played important roles in the Catholic Church in Africa. They are the ones that carry on the most activities in the communities. Many of them are catechists.
Mary Nyaluak Luny is a 50 year old widow. Born in Patit, Jagei, she was married while a teenager. After she had her first three children, two boys and one girl, life became very difficult for her. Her in-laws died, and her husband was killed in the war in 1985. She was forced to emigrate with thousands of Nuer to Ethiopia in 1987. In Ethiopia she met Fr. Benjamin Madol who welcomed her and her children into the church. At the end of 1988, she joined the catechumenate. When the government of Mengistu was ousted in 1991, the Southern Sudanese who were refugees in Ethiopia were sent back to their country. Nyaluak went to Nimule where she continued her training for baptism and was baptised with the name of Mary on 24 August, 1993. After her baptism she tried to live her life as best she could according to the Gospel. She worked with the priests, the sisters and with the bishop himself. 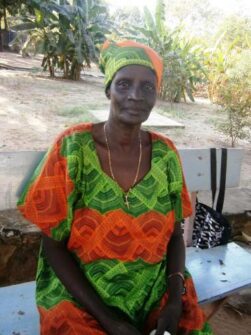 Mary Nyaluak Luny. She is the leader of the women association called: The Women of Saint Luke.

In 1995, Mary Nyaluak went back to Leer in Upper Nile. She decided to work with the missionaries who arrived in Leer in 1996. She also became involved in Church activities, first with the Legion of Mary and later in other ministries. With the help of the parish priest, she started the Women of Luke Association on 5 November 1997. In 1998, the parish priest organized training to prepare women catechists.
She joined the training together with seven other women.
Unfortunately the war reached Leer in June 1998. Many people were killed and tens of thousands of them were displaced. The missionaries were also displaced to other areas of Upper Nile. In the middle of the turmoil produced by the war, Mary Nyaluak moved to different places to save her own life and the lives of her children. Wherever she went she worked in the Church. 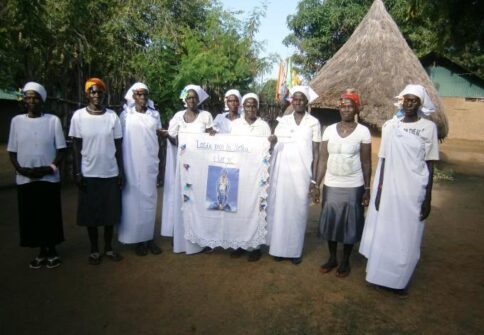 In 2002, she went to Nyal and got involved in the Church’s ministry. She started to reorganize the Women of Luke Association. They were dispersed by the war but the association did not end. She was appointed catechist on 1 August, 2004.  In 2005 she organised courses to train women catechists in Leer and Mayandiit, and she started the Sunday School of Religion in those two places. Today, she continues to pray every day with the Women of Luke and the Christian community and is always ready to serve in any work that is needed in the Church.

My vocation is to be a catechist
John Kuk Baluang was born in 1951, in Gany a village of Jagei in Western Upper Nile. In 1970 he went to Khartoum. There he met some friends from his home village in Jagei, who were Catholics. They tried to convince him to go to the Church but he refused. Every Sunday, they invited him to the Church but he declined. But one day he did agree to go with them, just to please them and out of curiosity. He liked the prayers, the teaching, and the people of the Church. He decided to become Catholic. At the beginning of 1974 he joined the catechumenate. He was baptised on 17 September, 1974. He was confirmed on 19 December, 1974. 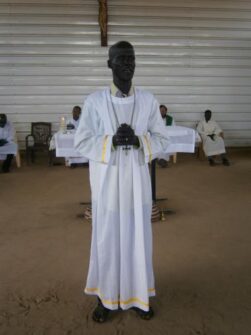 In 1975 he went to Malakal. He started his basic education in that town. But he only reached primary three. He went back to Khartoum in 1978 and he completed his primary education there. At the end of primary school, he went to Bahr el Ghazal where he joined the Vocational Training Institute. In 1983 he went back home but the situation was bad in Jagei and the second civil war of Sudan started. He went to Ethiopia as a refugee. He spent the year 1984 in Addis Ababa and he settled in Gambela, a refugee camp for Southern Sudanese and home of the Ethiopian Nuer.
There he continued his education and in 1987, he was awarded the certificate of secondary education.
In 1989, he was elected catechist in Gambela. He accepted the appointment, because when he was in Bahr el Ghazal, he liked to work in the Church. In 1991 he became an itinerant missionary-catechist and taught the Catholic faith in many places. He worked hard to establish the Catholic Church in Koch. 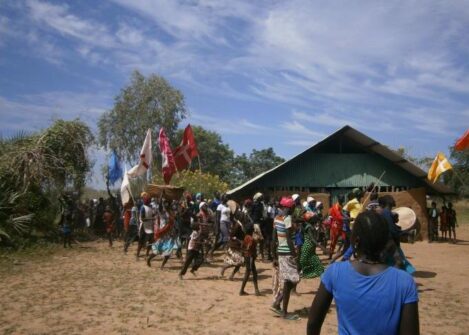 John deeply believes in his vocation as a catechist. He says that God has been always with him and he has protected him from many dangers because he chose him to teach the Word of God to the Nuer. He remembers two events in particular. “In 1998, some militia launched a surprise attack on Koch while we were all sleeping. When the militia entered Koch they threw hand grenades in all directions. One was thrown into our house but by the grace of God it did not explode. We live today to witness to this miracle of God in our lives”.
On another occasion he narrates: “Two different Nuer factions (SPDF and SPLA) met in Koch to discuss their differences and try to make peace. Their meeting took place on 29 October, 1999. They invited me to the meeting as a Church leader to pray for the meeting and to participate in it. The end of the meeting was unfortunate. Both sides strongly disagreed and instead of making peace they started fighting. They used their guns and for a couple of minutes they shot at each other and I was in the middle! When the shooting ended, the place was filled with dead bodies. There was blood everywhere. I was really scared as there were some dead bodies on top of me. But I was alive! Twelve people were killed in the meeting place, but once more I was saved by the power of God. He protected me because I went to that meeting as a catechist, as a man of the Church. I went in the name of God. I always trust God in my life and he has never abandoned me. He has shown me in so many different ways his love and protection!”
Today John continues his work of evangelisation with great zeal, faith and generosity. He is based in Koch.