On the Madagascar plateau the bodies of the dead are exhumed from their tombs and brought out for a day of celebration which, with singing and dancing renders homage to their dead.

Close to the edges of the rice fields connecting the valleys of the central highlands, flickering lights can be seen in the darkness of the villages: nocturnal processions of 15, or at the most 20, people of the same family seeking tombs and ossuaries. It is in this period between June and September that, in the highlands of Madagascar the rite of the ‘Famadihana’ takes place; it is the exhumation of the dead, and a traditional ceremony that brings back – if only for a few hours – the bodies of the dead to the land of the living.
Famadihana literally means ‘turning the bones’, also known as the ‘Feast of Return’ or ‘Second Funeral’.“Among the Bara, Merina and Betsileo peoples, the cult of the spirits of the ancestors is a social element and is part of people’s daily life”, explains Anji, a zebu cattle raiser of the area, who paid several head of cattle to have the body of his father exhumed, for years after his death. What generally happens is that anyone who has the necessary means will not lose the opportunity to re-embrace the remains of a loved one and transfer their remains to a permanent tomb, much more elaborate than the first. 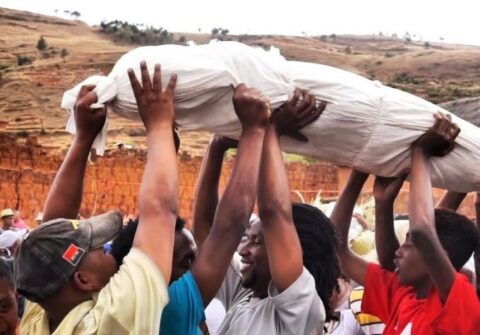 It is the task of the elders to examine the heavenly bodies and decide upon the days of exhumation. It may also happen that the spirit of the dead person asks for the ceremony, appearing in a dream to a relative, and accusing the relatives of having forgotten them.
The ritual is carried out in an atmosphere of rejoicing with singing and dancing: the remains are taken from the tomb, carried shoulder high to the sound of music and then wrapped in a sheet of silk and satin.
The bodies will later be placed on the grass, and a specially hired orchestra creates a festival atmosphere. Quantities of local beer, wine, and distilled drinks are distributed, as well as abundant food consisting of rice served with zebu meat and pig meat. Once they have eaten and danced, the people sit down around the bodies. Both men and women spray them with perfume. 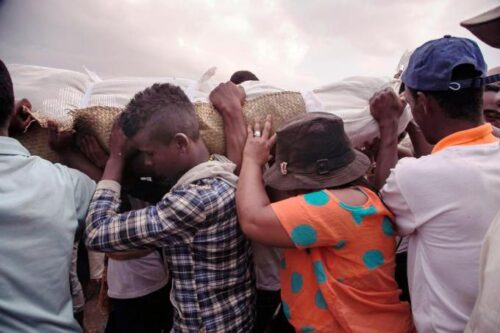 “My girl got married, had a child and I am now a grandmother”, one woman recounts as she faces the shroud: in turn, each member of the family tells of what has taken place since the person died. The close relatives pin photographs and low denomination banknotes, while the people around them are dancing and glasses of rum are handed out.
Immediately before the burial, any young women who wish to have children take strips from the shroud and keep them under their mattresses as fertility charms.
Not far distant, on the other side of the valley, processional torches indicate the start of another exhumation. “You may look – someone remarks – but do not point your finger at them. It would be very impolite and the dead demand respect”.
When the ceremony is over, the dead are carried shoulder high for seven ritual rounds of the tomb and, just before the sun disappears below the horizon, they are restored to their own world. 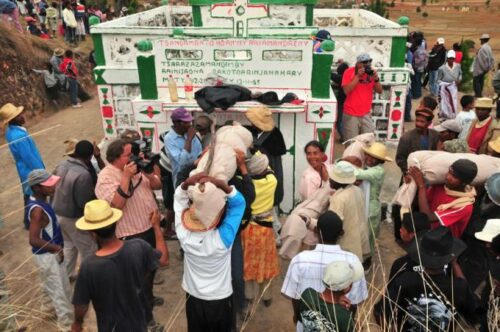 In Madagascar death is not a cause of fear or sorrow since the kingdom of the dead is closely connected to the world of the living.
Each ethnic group  has different customs, but passion and respect for the funeral rites are common to all.
Among the Merina and Betsilio ethnic groups, in the south of the Central Highlands of Madagascar, funerals last several days and the remains are interred in sumptuous mausoleums. The Vezo, in the south west of the country, build tombs of wood that are allowed to deteriorate: when they crumble, the soul of the ancestor is free and at peace. The Bara choose mountain caves where they bury their dead. The Mahalafy of the south build mausoleums in which they place coloured illustrations, small totems, even small airplanes, cement taxi boats, and zebu horns.