The recent discoveries of oil have brought Guyana to the centre of international attention. Many interests are at stake.

Guyana is a South American country located on the Atlantic Coast and wedged in between Brazil, Venezuela and Suriname, bordering these countries to the south, east and west, respectively. The country is characterised by dense rainforests. The territory consists mostly of plains. The part near the sea is covered with alluvial soil deposited by the many rivers that pass through it. The internal part is hilly while the east and the south are mountainous. 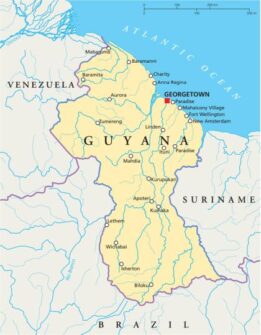 For many years, Guyana was outside the expansionist ambitions of the colonial powers and considered to be unhealthy and swampy whose coasts were largely occupied by the mouths of rivers pouring into the sea. The first on the scene were the British and then the French, followed by the Dutch who belonged to the very powerful Dutch West India Company. These countries were the first to enter the zone and they immediately divided the territory into three parts: British Guyana, Dutch Guyana, also known as Suriname, and French Guyana. They each established sovereignty over their own areas by means of peace agreements and by founding the establishments for purely commercial purposes, opening the way for colonisation by means of the abundant use of slaves imported from Africa.
During the sixteenth century, the flat part of the country began to be used for growing coffee, tobacco and cocoa. The colonists worked hard to build polders to keep out the sea and drain the land for cultivation. Due to the low level of the land, the polders could only receive ‘external water’ by means of artificially-operated devices. The creation of the polders, in the early eighteenth century, enabled the cultivation of sugar cane to be increased, a development made possible by the hard labour of the African slaves. The industry also produced rum and molasses. Over the years, slaves who managed to escape from their masters organised themselves into communities, taking refuge in the forests and mixing with the Indios. 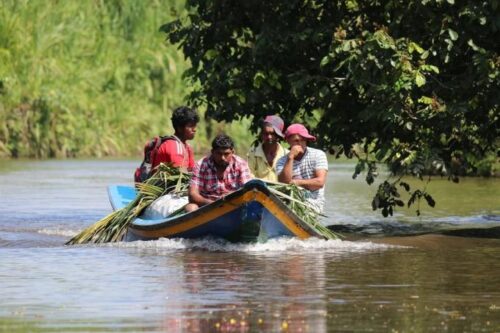 With the Congress of Vienna, (1814–1815) the territory was definitively assigned to Great Britain and, in 1831, took the name of British Guyana. Later, in 1838, slavery was abolished also in Guyana and, to provide the plantations with manpower, contract workers were imported from India and other parts of the world. This change profoundly affected social structures because of the increase in the population from 100,000 to 127,700 inhabitants in 1851, and afterwards reached 296,000 in 1911 and 344,000 in 1937, eventually exceeding 500,000 in the nineteen fifties – as well as its varied ethnic composition. In Guyana, many groups are present among which are: the Indians (43.5%), Africans (30.2%), Afro-Guyanese (16.7) and Amerindians (9.2%) who live along the rivers in the interior of the country divided into nine tribes: Akawaios, Arawaks, Arecunas, Caribs, Macusis, Patamonas, Wai Wais, Wapisianas and Warraus. There are also people who are descended from the Maderesi recruited in the eighteen hundreds, some Chinese and other Europeans. The ethnic variety is also reflected in the variety of religions where Hindus are the majority (28.8%), together with Protestants (18.7%), Catholics (8.1%) and Muslims (7.3%). About 90% of the population is concentrated in the coastal strip between the estuaries of the Essequibo and Courantyne Rivers. 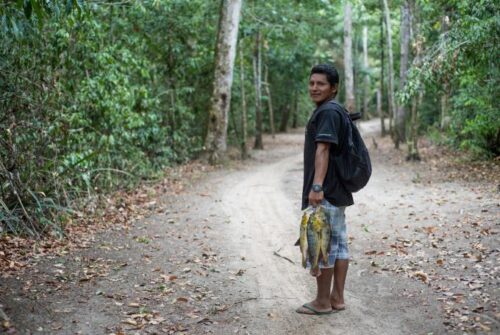 Today, Guyana has a population of 780,000 inhabitants and, after Uruguay and Suriname is the third smallest sovereign state in South America. The country has the highest rural population density on the continent. Although 90% live in the coastal area, the population density is very low, around 115 inhabitants per km².
Unfortunately, there are frequent tensions between the different communities, especially between the Indians and the Africans, with considerable consequences in the political sphere. The country is in the grip of migration with an estimated 500,000 Guyanese living abroad. Around 11,000 people leave the country every year, mostly going to the United States, Canada, the United Kingdom, as well as Venezuela and Brazil which are geographically closer.
Georgetown is the capital and is the main fulcrum of the economic, political, social and cultural affairs of the country. Linden and Golden Grove, with 28,000 and 23,000 inhabitants respectively, are the next two important inhabited centres; all the rest are small villages or centres with fewer than 20,000 inhabitants. 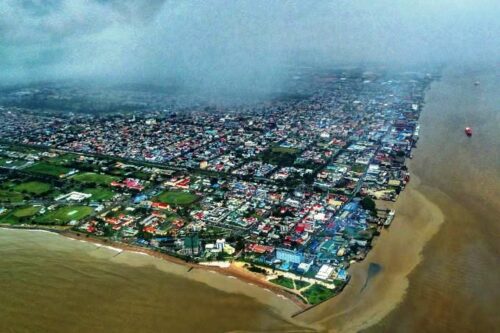 The languages spoken in Guyana obviously reflect both its history and its ethnic composition. English is the official language while such languages as Urdu-Hindi, Tamil and Creole are also widespread. The indigenous communities, on the other hand, are faithful to their own languages derived from the Arawak family of languages.
Concerning the indigenous populations, it is to be noted that, in recent years in Guyana, there has been significant progress that has helped the indigenous people tackle the poverty of which they were the main victims, by means of the economic transformation of the villages while protecting their culture and traditions.
Today, in fact, it is not unusual to find members of these ethnic groups occupying institutional posts such as that of a minister. They are also involved within social life and Indians are present in politics as well as in the health and education sectors.
In 2004, the government granted an immense tract of land of about 4,047 km², in the district of Konashen, to the Konashen community, managed by the Wai Wai people. This is one of the largest protected areas belonging to a community that is striving to implement a development plan for the sustainable use of the biological resources of Konashen COCA and the identification of threats to biodiversity, by means of targeted projects aimed at keeping the zone protected. The territory is the only one of its kind with a high level of biological diversity. (F.R.)