After the liberation of Mosul and the Plain of Nineveh, thousands of Christians are returning to their homes and their communities. Committed Churches.

It was in the summer of 2014 when the Islamic State (IS) men entered the city of Mosul. At the great mosque of Al-Nuri, Abu Bakr Al-Baghdadi proclaimed himself ‘Caliph of the Islamic State’ and declared war on the West. Mosul is an important city in Iraq due to its water reserves. Just 50 km away there is the Mosul Dam, the largest in the country and fourth largest in the Middle East.
Before the occupation, this dam on the river Tigris provided electricity to two million people and water for agriculture in the whole province. 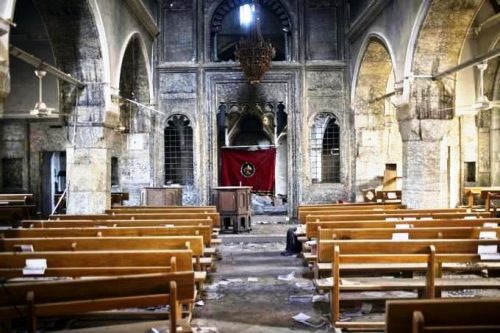 The occupation of Mosul would last three years, three long years of violence, torture and death for all who were not Sunni Muslims. Thousands fled from Mosul and from the Plain of Nineveh.
It was only when the city was liberated that the full extent of the destruction and massacres could be seen. Many Christians decided to return to the liberated city where they now want to rebuild their two thousand-year-old Christian presence there.
Qaraqosh, a small urban centre about 30 km south west of Mosul and known as the main Christian stronghold in the country, has seen the return of an estimated 25,000 Christians: 46 per cent of those who lived there before the IS invasion.
There have also been notable returns to other villages on the Plain: 26 per cent of Christians have returned to Karemlesh, 5 km from Qaraqosh while more than 5,000 Christians, 73 per cent, the highest in the area, have returned to Telskuf, 60 km to the north. 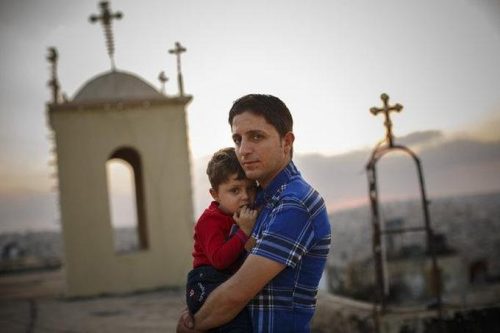 The village of Telskuf was the first to re-consecrate a church, that of St. George, which had been damaged and profaned by IS. In the words of Bishop Bashar Matti Warda: “This is a message of hope and of victory. The Islamic State wanted to eliminate the Christian presence but instead it is the Jihadists who have left while we have returned”.
The churches of Iraq have been in the front line of the reconstruction process. The work of repairing and rebuilding the more than 13,000 homes burned, destroyed or damaged by IS, has been coordinated by the NRC (Nineveh Reconstruction Committee), set up on 27 March 2017 by the three Churches of Iraq: the Chaldean Catholic Church, the Syriac Catholic Church and the Syriac Orthodox Church. Each of the three churches has due representatives in the committee.
Monsignor Timothaeus Mosa Alshamany, Archbishop of the Syriac Orthodox Church of Antioch and prior of the monastery of St Matthew, emphasises its two-fold historic importance: on the one hand there is the ecumenical spirit and, on the other, the real possibility for Christians to return to their roots and live a dignified life. “Today – he said – we are a truly united Church; we are united in the reconstruction of homes on the Plain of Nineveh, in instilling confidence in the hearts of the people living in the villages and in inviting those who left to return”. 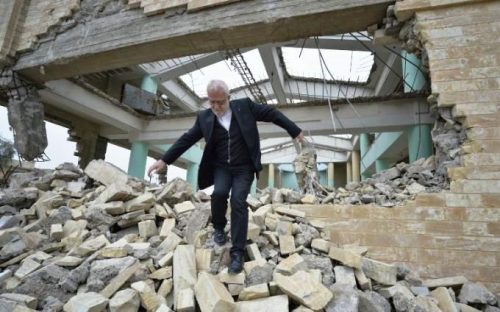 Many priests have have been turned into engineers, architects and builders.  Father  Georges Jahola is one of them: he is a Syriac Catholic priest and has coordinated the reconstruction of Qaraqosh. He remarked: “After three years of IS occupation, we returned to find four churches burned down, two Catholic and two Orthodox. One church was completely destroyed and the others badly damaged. We celebrated Mass in the damaged churches. We are now building and restructuring buildings for catechesis and other pastoral activities.
Our priority is to re-establish our Christian presence and to facilitate the return of families who wish to come back. We want to create places where children, the youth and the adults can spend their free time”.
Father Padre Jahola continues, as he recalls the terrible conditions he found in Qaraqosh: “We found a city destroyed both due to being abandoned for three years and also to the fury of the IS. 35% of the houses were destroyed. We were afraid but we did not lose heart. We mapped all the houses, took pictures of them and assigned each building a code number with a description of the damage it suffered. Here in Iraq, if the Church does not see to the needs of these poor people, then nobody else will”. 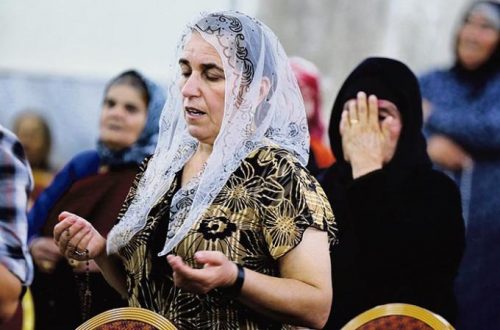 Today, in places where the black IS flags flew, there are now Christian families. “Almost all the parishes have been reopened – Father Padre Jahola continues – . Just two years ago it was impossible to think of returning to Nineveh However, this now means that we must return to our roots so as to live our faith in communion with that of our ancestors”.The return of Christians to Nineveh after the liberation was not really surprising but the situation is quite different in Mosul.
“The great challenge for us is to restore the confidence of the faithful so that we can work together to create a future for Christians in Iraq”, says Monsignor Michael Najeeb Moussa, a Dominican and the new Bishop of the Chaldeans in Mosul, who was consecrated on 25 January of this year. There are many civil servants and Christian university students who go to Mosul every day but only a few of them have the courage to live there permanently. They are afraid that there may still be hidden Jihadi cells  and that the IS may return. Furthermore, Christians find it hard to trust their former Moslem neighbours, many of whom collaborated with the Islamist fighters. “They prefer to commute up to 85 kilometres and spend the night in their villages on the Plain of Nineveh They do not feel safe here”, Mons. Moussa explains. At present, he cannot live in the city: “85 per cent of the churches of Mosul have been destroyed, including the Archbishop’s House”. Mons. Moussa hopes to return soon and is sure that the presence of a bishop in the city will give new hope to others. “I believe it is possible for Christians to return to Mosul and I believe everything will change when we again start to celebrate Mass as we did for two thousand years, before the coming of IS”. 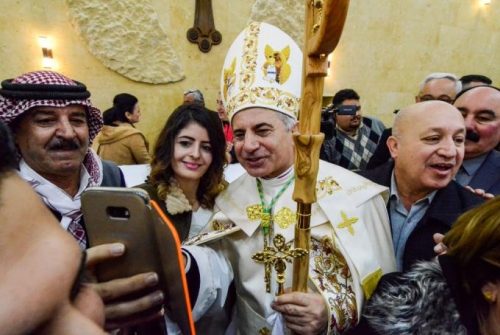 Monsignor Moussa has played a decisive role in preserving Christian roots. When he fled to Erbil, after the arrival of IS in 2014, he took away hundreds of ancient manuscripts he had been cataloguing and digitalising for decades to preserve the historical patrimony of the Christian people and the entire Iraqi people. Just like his predecessor, Archbishop Emeritus of the Chaldeans of Mosul, Emil Shimoun Nona, Mons. Moussa suffered the same fate as the Christians of Mosul and those of the Plain of Nineveh.
On the night of 9 June, 2014, the IS took control of the city, forcing more than half the population to flee. The few Christians who, during the first weeks of IS occupation, had stayed in Mosul, were at first forced to pay a tax called the ‘jizya’, a so-called ‘protection tax”, imposed on non-Muslims during the time of the Ottoman Empire. However, in order to transform Iraq and Syria into a single Islamic Caliphate, it was necessary to eliminate the religious minorities. As a result, in mid-June, the homes of Christians were all marked with the Arabic letter  «ن», the first letter of the word ‘nasara’: Nazarenes.
The fundamentalists then forced the remaining Christians either to convert, to flee or to be killed. Immediately, endless lines of vehicles and people on foot set out for Iraqi Kurdistan and the Plain of Nineveh. Those who opted to leave had again to flee for their lives on the night of 6 August, 2014, when the IS took over 13 Christian villages on the Plain. In a single night, more than 125,000 of the faithful had to leave their hope, taking nothing with them.
Many of them walked for hours to Erbil and the nearby city of Duhok. Having escaped the cruelty of the militias, the last Christians living in Iraq slept for days in churches, schools and in porticoes before finally finding a home in badly-ventilated tents where the temperature during the hot summer of 2014 often reached 44 degrees.Then, thanks to the local Churches and the generosity of many families, they found lodging in prefabricated houses or rented flats where they lived up to the end of 2017 or even later. 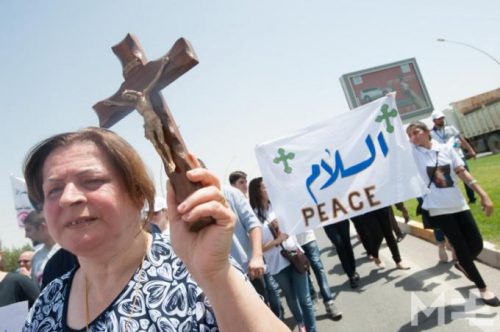 The Islamic State persecution of Christians was not the first suffered by Iraqi Christians. The total number of Christians in the country had gone down from 1,200,000 in 2003 to a little more than 300,000 in 2014. The instability of the country following the war of 2003 and the fall of the regime of Saddam Hussein, created an inferno for the Christian minority, caught in the crossfire between Sunni and Shiite Moslems as well as being directly persecuted.
In cities like Baghdad, Bassora, Kirkuk and Mosul, many Christian families had threatening letters pinned to the doors of their houses. Some Christians had to pay the ‘jizya’ while others had their lands taken from them. The women had to cover their faces like Moslem women. The numerous abductions and killings of members of the faithful, priests and even bishops marked the recent years of Christian life in Iraq. In Mosul, one of the symbols of Christian martyrdom in the Middle East after the fall of Saddam Hussein, was the killing, in hatred of the faith, of over one thousand Christians. With the liberation of the Plain of Nineveh and of Mosul, life is slowly beginning for many Christians, even if they still have a long way to go.