Marriage is highly esteemed among the Banyakole and it is one of the most expensive and honored ventures. Among the things that have persisted in the Ankole culture is the marriage rite.

Before westernization found its way in the Ankole culture, by the time girls turned eight or nine, particularly among the Bahima, preparation for marriage began. Girls were mostly kept indoors, where they ate beef and millet porridge and were forced to drink milk in large quantities; in contrast to Bahima men, girls were considered attractive by becoming as fat as possible. Marriages often occurred before a girl was sexually mature, or soon after her initial menstruation. For this reason, teenage pregnancies before marriage were uncommon. Polygamy was associated with rank and wealth. Bahima pastoralists who were chiefs typically had more than one wife. 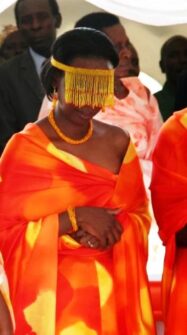 The bride is covered with hanging bids until the groom unveils her. (Photo/ Namanya Elias Makuka)

The Bahima and the Bairu did not, as a rule, intermarry. Among both groups, premarital virginity was valued. A marriage fee was required among the Bairu, but this was not as elaborate as among the Bahima. Commonly, 14 cows were given by the prospective groom to his father-in-law. The cows were then distributed by the father-in-law to his brother and to a favorite sister and all members of his extended family where he had obtained his wife. The goats were in exchange with the child that would be born to the father’s family and not the mother’s family.
Among the Bahima, marriage exchanges were much more elaborate, but the same principles operated. When the bride came to take up residence with her husband, she was received by her future father and mother-in-law by sitting on their laps.
Later, while sitting on a mat, the couple sprinkled each other with grain, then stirred millet flour in boiling water to symbolically illustrate that a new domestic unit had been established. Exchanges of food and gifts occurred thereafter for several days between the two families, to the accompaniment of music, dancing, and beer drinking. 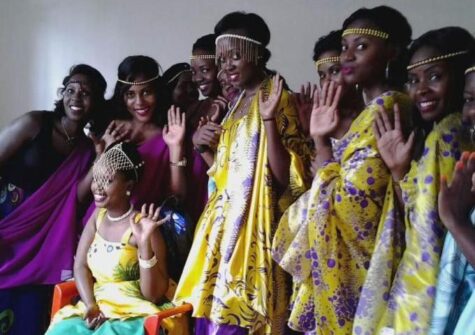 Today, Christian marriages are common. What has persisted is the value attached to extended families and the importance of having children as a measure of a successful marriage. Polygamy has been replaced largely by monogamy, the prescribed form of marriage of Christian religions. However, the traditions of marriage have also stayed, especially the events such as the introduction where the girl introduces her man. On the introduction, a Munyankole father, occasionally assisted by his relatives, is obliged to get a wife for his son by paying the required bride-wealth. This consists of five cows, three goats, and some pots of beer among the Bairu; among the Bahima it may range from five to twenty cows, depending on how wealthy the person is.
Once the bride-price has been paid, preparations for the traditional marriage begin. On the introduction day the bride’s father slaughters a bull for food. Other forms of food and a considerable amount of beer are prepared for feasting at the bride’s home.
This is followed by another feast at the bridegroom’s home, where the marriage is consummated. At the wedding ceremony the girl’s aunt confirms that the groom is potent and that the bride defended her virginity before the marriage was consummated. 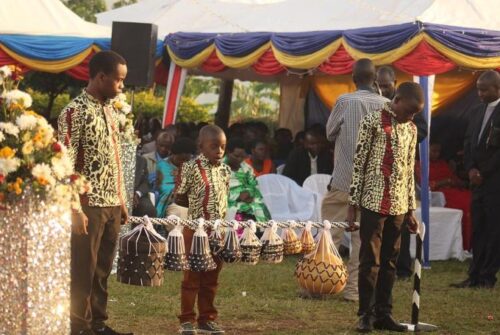 One of the significant traditions during the marriage day is the tradition of Omugamba (a stick containing various gifts). This is presented on the traditional give-away ceremony by the girl’s family to the man’s family. Photo: CC BY-NC 4.0/ Aggrey Nasasira

One of the significant traditions during the marriage day is the tradition of Omugamba (a stick containing various gifts).  This is presented on the traditional give-away ceremony by the girl’s family to the man’s family. Omugamba consists of various gifts including: Ebyanzi (the wooden vessels made of smoked black wood, covered with beautiful, handmade covers known as emihaiha, woven with sisal and other fibres printed in geometric patterns). These vessels are used while milking, serving and storing milk. They are given according to the number of cows the bride’s family has received as bride price. Ekirere, this is a small calabash used for drinking skimmed milk or preparing yoghurt which is known as amakamo, and is made by sieving raw milk in the morning.  Eicuba, this is a wooden container/bucket used to draw water and fill the drinking trough during okweshera (time for cows to drink water). Rukomyo, this is a perfume pot used for personal hygiene. It is a pot with three holes where scented smoke used as perfume by women is contained. 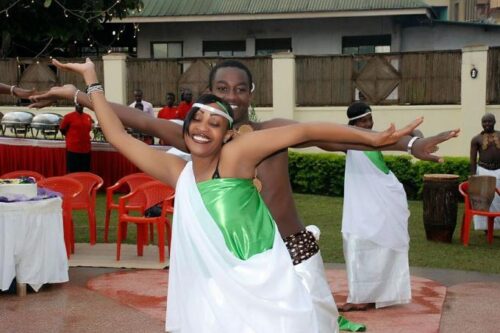 Ekicunga, this is a clay pot used to fumigate milk pots/gourds. Akacwende,  is a calabash used for string perfumed ghee which is used as petroleum jelly by women. The ghee in the calabash is mixed with scented herbs to produce a nice scent. Emboha, a rope made of sisal that is used to tie the hind legs of a cow during milking. Enkuyo, is a broom-like tool made of sisal used during milking to keep flies away from the cow while being milked.
Today, marriages are delayed, given the attendance at school of both girls and boys. One consequence of this delay has been a rise in teenage pregnancies out of wedlock. Girls who become pregnant are severely punished by being dismissed from school or disciplined by parents. Open Photo. Ankole women in their traditional wear. CC BY-NC 4.0/ Kalungi Nathan (G.L.M.)