Each day it is criss-crossed by invisible travellers who arrive after placing themselves in the hands of human traffickers, under cover of darkness, crossing the frontier with Sudan along paths lost in the thick undergrowth. Welcome to Metema, a city in the north-west of Ethiopia, on the Sudan border, the launchpad of the migration routes of eastern Africa.

It is here that the journey begins across the Sudan and Libya to reach Europe, undertaken by  Ethiopians, Somalians and especially Eritreans, who are already in the refugee camps in Ethiopia. Metema check-point is known all over central east Africa. They come in buses from  Addis Ababa, or hidden in private vans or cars. “This place is full of human traffickers. But no, I would rather not speak about these things: my life would be in danger if they came to know I spoke to ferengi (white people)”, a man tells us on the road that leads straight to Sudan. The payment for crossing the frontier is anywhere from one thousand to three thousand Birr (from 30 to 100 Euro). A good proportion of the money is used to bribe the police. 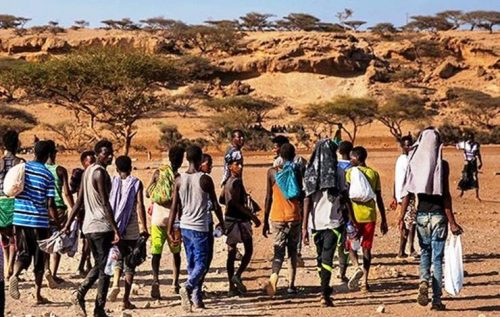 In recent months, the government of Addis Ababa has tightened controls and arrested some of the major traffickers, but the illegal migration through Metema continues. Each night, in the confused network of tracks leading to the frontier, the undocumented migrants wait for the moment when they can cross over. Hamid is one of those boys who already tried to make the crossing through Libya, only to be caught by the Sudanese police and sent back. Today, he lives in one of the camps scattered throughout Tigray, the northern region of Ethiopia that shares a  911 kilometre border with Eritrea. “I approached a trafficker of Ethiopians. It is not hard to find them. They took me on a lorry up to Gondar  and then to  Metema where I spent a couple of nights before secretly crossing the frontier, in the direction of Khartoum. The police caught me there in the capital and sent me back. The Ethiopian police then sent me back to my refugee camp”. 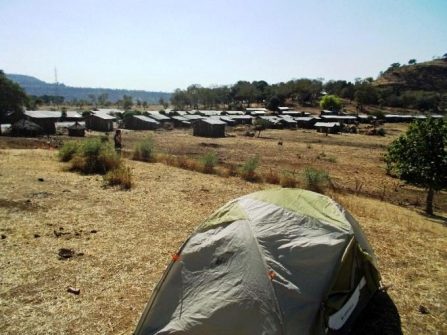 According to UNHCR data, there are 130,000 Eritrean refugees in Ethiopia, concentrated mostly in Tigray. Humanitarian organisations say that around 4,000 Eritreans flee their country every month. Following the procedure, refugees in Ethiopia are registered at one of the twelve entry points along the border. They are then taken to Endabaguna, a hotspot where they spend about twenty days when they are assigned to one of the four refugee camps in the area: Schi-melba, Mai  Aini, Adi Harush and Hitsats, run by the Ethiopian government’s Administration for Refugee and Returnee Affairs (ARRA), in collaboration with the Ethiopian UNHCR. To approach these immense areas of tin-roofed living modules is like coming into contact with disturbing lost and meaningless locations. Testimonies given by refugees are shocking: “We have no freedom of movement and we are tightly controlled. Anyone misbehaving is kept far from the programmes of relocation in Europe, our only hope of leaving this place with security. The other way is that of escape, as a boy did the other night. He just disappeared. The first stage of the journey is Metema”, they tell us. Others speak of very difficult episodes: “Violence often breaks out and there are suicides every week. We spend the days thinking how we can get away and escape. It becomes an obsession that worms its way into the mind”. 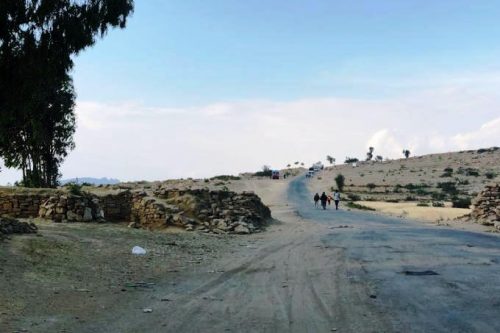 Fear has grown among the Eritreans after the peace accord between Ethiopia and Eritrea signed last July. They are now worried that, with the conflict between the two countries at an end, repatriation will begin. “For us, going back would mean death as we are considered traitors in our own country”, they explain. And there is more. Witnesses tell us the camps are rife with spies sent by the Eritrean regime: false refugees mix with the real ones to observe people and see to it that the relatives of those who ever speak out against the Eritrean regime are punished. With their network of roads and the tiny commercial activities, a few refugees have managed to start, the refugee camps have the appearance of precarious urban centres where the days are passed between the barbed wire fences and the surrounding lunar landscape of the Tigray highlands. It is no surprise that Metema, 480 kilometres to the west, with its shapeless frontier city profile, full of poorly-stocked shops  and huts, is seen as one of the gateways to paradise. A young Eritrean we met outside a hut in Mai Aini told us: “We know that some die in the desert and others drown in the sea and that the the European governments have closed their ports but we still want to get out of here. Escape is our only hope”.