Every year thousands of people go to pay homage to Saint Lazarus in El Rincón, a few kilometres from the capital Havana. “Only Cubans know the mysteries that Saint Lazarus hides”.

Pilgrims arrive breathless crawling on their knees along the path that leads to the National Sanctuary dedicated to Saint Lazarus in El Rincón. The place is packed with devotees paying homage to Saint Lazarus, the saint of the poor, the healer of the diseases of the skin. This miraculous old man is loved as much as Our Lady of Charity of El Cobre, the patroness saint of Cuba.
Every 17 December, the day of homage to the saint, a vast crowd gathers at the small town of El Rincón, about 15 kilometres from the centre of Havana, either to honour promises for graces they obtained or to ask the saint for health, money and love, essential elements, according to many, to achieve happiness. 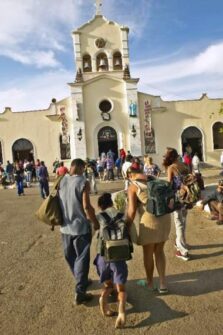 Revered throughout Cuba, this saint is represented as an old man with sores on his body, wearing rags, with crutches, accompanied by two small dogs which, according to legend, licked his wounds to soothe the pain. It is not very easy to reach El Rincón, a small town in the municipality of Rancho Boyeros. However, especially, on the 17th of December, one can see a vast crowd of pilgrims walking along the path that leads to the gates of the sacred site. Some arrive breathless crawling on their knees or on their backs, some even dragging rocks behind them all the way from central Havana to honour promises made to St Lazarus. Red Cross members are there, ready to come to the aid of those who are tired or pass out.
These touching scenes show how strong devotees’ faith is in this saint that grants miracles.
The cult of Saint Lazarus passes from generation to generation, some identify him as the Lazarus in the Bible, others as the beggar who appears in a parable of the Gospel, and still others as Babalu Aye, orisha (deity) of the Yoruba religion from Dahomey, in Africa. The cult of Saint Lazarus is therefore also an example of syncretic devotion: African slaves kept their old religions alive by ‘syncretizing’ their deities with Christian saints. The procession in honour of the Old man, as people affectionately call the saint, can be several kilometres long. Some devotees walk barefoot; others carry a large wooden cross on their backs; some tie a stone to a chain around their ankles. There is no distinction of sex or race among Saint Lazarus’ devotees. 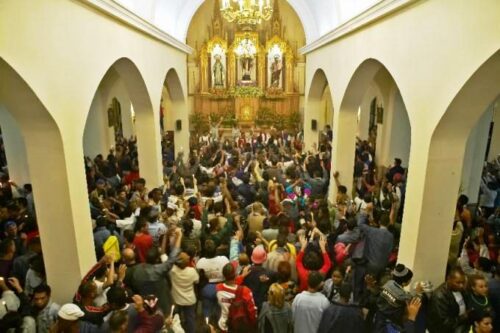 It is without a doubt, the 17th of December, the official date of tribute to the saint, sees the largest volumes of people at the sacred site in El Rincón. However, this church, dedicated to the cult of Saint Lazarus, is visited all year round. Every day a huge number of people go to the sanctuary bringing their little children, their grandparents and even their puppies to have them blessed by a priest. This shrine was built in 1917 as the Saint Lazarus Church and home-hospital for leprosy patients. In the nineties of the twentieth century, this small church was awarded the title of National Sanctuary.
In 1998 Pope John Paul II went to visit the shrine and celebrated a mass just as he did in Santiago de Cuba when he held a mass at the shrine of the Virgen de la Caridad del Cobre, as part of his pastoral visit.
The sanctuary remained unchanged until 1990, when two side aisles were added to make more space in order to accommodate more faithful. The whole building was restored, and despite the fact that the current structure does not have a defined architectural style it reminds one of a Colonial-Baroque-inspired church. The interior is rather modest: the main altar also shows neoclassical and romantic elements that make up a typically Cuban eclectic ensemble. Other smaller altars are characterized by neo-Gothic features and are dedicated, among others, to the Virgen de la Caridad and the Virgen de Regla. 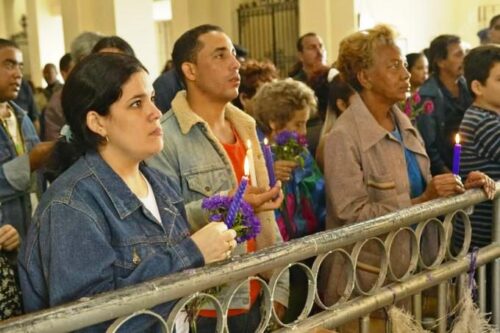 In the central vault, visitors can see a gigantic figure of a richly-dressed Saint Lazarus and, to its left, another smaller image of the saint, which is protected by a glass, where Saint Lazarus is represented as the partially-dressed ‘miraculous’ old man. The faithful stand praying before the image of the saint. They also make offerings, light candles and leave bouquets of purple flowers, the colour of the saint, which are placed in large baskets by attendants. Saint Lazarus …whether the Biblical Lazarus raised from the dead, or Saint Lazarus the ‘miraculous old man’, or the Afro-Cuban Babalu Aye, beyond beliefs and miracles, whether granted or not, fanaticism or tradition, this saint is part of  Cubans’ culture. These people find strength, resistance, humility and love in their religious faith. Only Cubans know the mysteries that Saint Lazarus hides, only Cubans know about the alleged miracles granted to them, or to their dear ones. One of the characteristics of these processions, despite being overcrowded, is silence. There is only one to talk to and to pray: this saint. And once people leave the gates of the sacred site behind, whether they are believers or not, their souls will certainly feel at peace. They will feel grateful for something they cannot even define. They can’t explain why… but they feel at peace with their conscience. (Open Photo: San Lazaro Catholic Church in El Rincon, Cuba. 123rf.com)