Foreign industries of transformation of fresh fish into fish meal and oil for export to European, Asian and American countries flourish on the coast.

The entire informal fishing chain in Senegal employs more than 600,000 people, contributing 3.5% to the gross domestic product. According to Aliou Ba, a Senegalese activist of Greenpeace Africa, fishing is a crucial sector both for socio-economic stability and for the food security of the populations of the entire region: “The local fish market, however, is now poorly supplied and very expensive, due to the over-exploitation and depletion of fish resources perpetrated by large foreign fishing boats. At the same time, the usually foreign industries of transformation of fresh fish into fish meal and oil for export to European, Asian and American countries flourish on the coast”.
These products, increasingly in demand on world markets, are used as feed in intensive farming of animals or other more valuable fish – such as, for example, salmon in Norway and Sweden – as ingredients in the cosmetic industry and in the manufacture of food for pets. “Senegalese fishermen, like their colleagues from neighbouring countries, are experiencing a dramatic situation”, Aliou ruled. 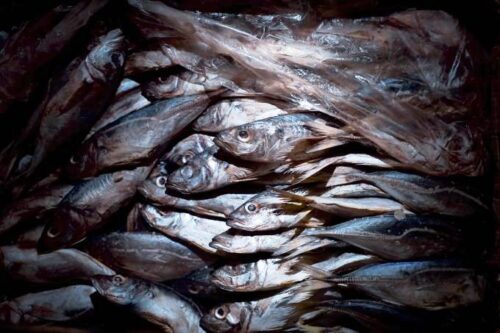 A report published in June 2021 by the Changing Markets and Greenpeace Foundation estimates the fish caught each year off the western coast of Africa and grabbed by foreign processing industries, at over 500,000 tons. Natural resources that, the Report specifies, could feed 33 million inhabitants of the African region.
According to Greenpeace’s observations and complaints, the main culprits of industrial fishing in these waters are European, Chinese, Turkish, and Russian countries. Fleets that, according to Aliou Ba, “often operate thanks to licenses granted by the Senegalese government in a non-transparent way, in spite of the decision, in 2012, to freeze all new fishing concessions to try to curb the over-exploitation of fish stocks”.
In May 2020, the National Coalition against the granting of illegal licenses, which brings together the major players involved in the sector, wrote an open letter to the President of the Republic Macky Sall to denounce the attempt by 52 foreign companies to obtain illegal permits. Added to this are illegal fishing boats flying the Senegalese flag using borrowed names or mixed companies as a cover to circumvent fishing bans in areas intended exclusively for local use.
“It is a context in which it is not easy for African states to control, define real responsibilities and sanction harmful and illegal practices”, comments Aliou. This is why Greenpeace Africa has for some time been unsuccessfully asking the Dakar government to publish the complete list of national and international fishing vessels active in Senegalese waters. An opening in this sense was aired last year by Macky Sall himself, who, following protests from sector unions, had also promised to organize an ad hoc presidential council. Words which, so far, no deeds have followed. 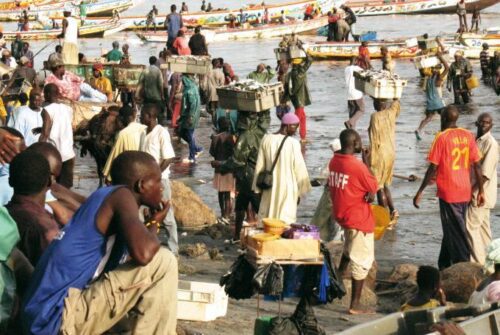 In April 2022, neighbouring Mauritania, on the other hand, succumbed to pressure from Greenpeace and other associations in defence of informal fishing by joining the international program Fisheries Transparency Initiative (FiTI). A decision that Aliou Ba hopes will soon be followed by Senegal as well. “To solve the problem of the plundering of our seas, a common regional strategy must be implemented which focuses on shared surveillance and regulation of the entire sector”.
For Aliou Ba, strategic resources – such as yaboy, a pelagic sardinella at risk of extinction, particularly used in the processing industries to manufacture oil and fishmeal, which, in addition to being rich in iron, zinc, vitamin A and B12, contributes to 75 % of the animal protein intake of the inhabitants of Senegal – should be protected and managed in a more forward-looking way by African governments, especially in a regional and global context destabilized by conflicts and climate change. “The erosion of the coasts and of the seabed, which also causes the destruction of the infrastructure and homes of informal fishermen, is violent in Senegal and is exacerbating the numerous criticalities that threaten artisanal fishing”, concludes Aliou Ba. (Open Photo: 123rf.com)
(AdG)