In the context of the US military presence in Taiwan and US Navy incursions in the China Sea, Beijing’ s plans to set up a naval base in Equatorial Guinea is rising tensions between both superpowers.
A Chinese base on the Atlantic might also increase NATO’s involvement in Africa.

On the last 5 December, the Wall Street Journal raised the alarm about Beijing’s plans to establish a permanent naval base in Equatorial Guinea. The paper mentioned classified U.S. military intelligence reports which warned that in such scenario Chinese warships would be able to rearm and refit opposite the East Coast of United States
Accordingly, the Chinese are planning to use the port of Bata, on the country’s mainland coastline which could handle any vessel of the People’s Liberation Army Navy (PLAN). The Chinese military are capitalizing on the funding by the Export-Import Bank of China of the construction of this port by the state-owned China Communications Construction Company’s  First Harbor Engineering Company which was completed in 2019. 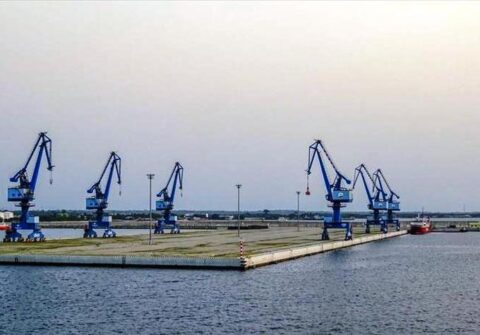 For the White House, such plans raise national-security concerns, which prompted Principal deputy U.S. national security adviser Jon Finer to visit Equatorial Guinea last October to persuade President Teodoro Obiang Nguema to resist to China’s lobbying efforts.
These American concerns in a context of rising tensions between Washington and Beijing. are not new: in April 2021, the U.S. Africa Command (Africom) boss, General Stephen Townsend told the U.S. Senate that the “most significant threat” from China would be “a militarily useful naval facility on the Atlantic coast of Africa”.
In a report to Congress in 2021, the Pentagon said that China has “likely considered” African bases in Kenya, Seychelles, Tanzania and Angola. In 2017, China established its first overseas naval military base in Djibouti, in the Horn of Africa, which can accommodate aircraft carriers and nuclear submarines, beside the military installations from the U.S., France, Spain, Italy, Japan and Saudi Arabia.
The pretext for such installation was plan’s contribution to fight piracy and protect global trade This same pretext is now used again by China to expand its military influence in the Atlantic. American diplomats have already advised Mauritanian authorities to rebuff Beijing’s efforts to use the N’Diago Chinese-built port, for military purposes, after it was inaugurated by President Mohamed Abdelaziz in December 2016. 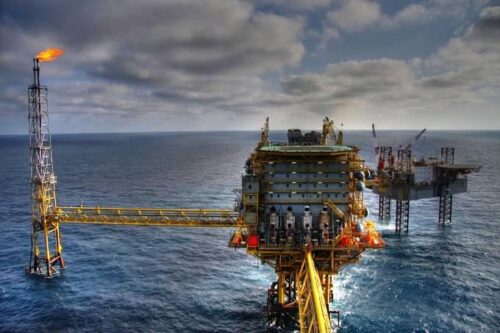 Nigeria is also on the list of potential targets as showed China’s attempts to consolidate bilateral military links such as the participation in 2018 of its guided-missile frigate Yancheng to Lagos, for the multinational naval exercise Eku Kugbe in the Gulf of Guinea, sponsored by the Economic Community of Central African States and the Economic Community of West African States (ECOWAS). One of the reasons for China’s participation to this exercise which also involved ships from Cameroon, Ghana, Togo, France and Portugal and China, is the importance of Beijing’s economic interests in Nigeria. State-owned companies such as PetroChina, Sinopec and China National Offshore Oil Company, have all investments in Nigeria’s oil sector.
China has also increased its military presence along the Atlantic coasts of Africa, in Morocco where it inaugurated last December its first military base near the town of Sidi Yahia el Gharb with a long-range air defence system developed by China Aerospace Science and Industry Corporation.
Yet, having plans is one thing, materialising them is another. A case in point is Angola where the government’s mouthpiece, the Jornal de Angola, in an article published on the 27 December 2021, stated that this country won’t be part of Chinese plans, since its constitution does not allow the installation of foreign military bases on its territory. In the past, the Luanda authorities turned down a similar American request for setting up a military base, accordingly. 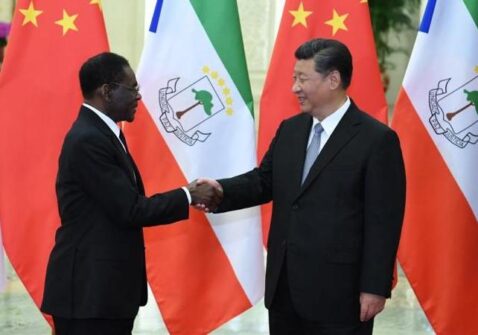 However, China is not giving up. It has continued to improve its military cooperation with Angola. On the 20 July 2021, the national director of the Defence Policy, Barbosa Epalanga, told the press that several cooperation instruments already existed between both countries, including an agreement between the respective defence ministries and another concerning the supply of non-lethal military equipment. According to Bloomberg, the first negotiations on the installation of a Chinese military base in Angola started in December 2014. Such base, according to the Namibian Times, was part of a plan consisting in setting up 18 bases across Africa and the Middle East. Beside Angola and Namibia, Cape Verde was also approached by China.
The U.S. who wants to block these attempts, are faced with some problems, especially regarding Equatorial Guinean case. While Beijing insists that it does not to interfere in African partners’ domestic politics, the U.S. State Department has accused the Obiang regime of extrajudicial killings, forced disappearances and torture.
In addition, the U.S. Justice Department pursued the allegedly ill-gotten gains of the President’s son and Vice-President Teodoro “Teodorin” Nguema Obiang Mangue who accused of amassing a fortune of over $300 million “through corruption and money laundering”. Such accusations prompted the Equatorial Guinean Foreign Ministry to condemn the U.S. announcement as a “misrepresentation” of the facts.
On top of that, even if American oil companies conducted most of Equatorial Guinea’s oil exploration and production, China is indisputably the country’s first economic partner. In 2006, the China Eximbank extended a $2 billion oil-backed credit facility to Equatorial Guinea in order to finance the development of the deep-sea port in Bata.
In 2015, the Industrial and Commercial Bank of China signed another $2 billion deal to support infrastructure projects and local activities of Chinese businesses. On that year also, Huawei Marine Networks was awarded a contract by the Malabo government to connect its submarine cable system into a network that reached Europe. Altogether, Equatorial Guinea’s debt to China has created a high degree of dependence: by 2021, it amounted indeed to half of the national GDP. 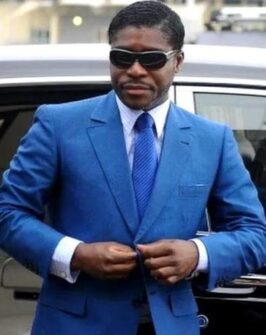 Simultaneously, Teodorín has been trying to defuse tensions with Washington.  Just after the publication of the WSJ story he denied that any deal concerning the establishment of a Chinese naval base in Equatorial Guinea had ever been sealed. However, a week later, President Obiang Nguema spoke by phone with President Xi Jinping, after which Beijing released a statement highlighting that “Equatorial Guinea has always regarded China as its most important strategic partner.” Teodorín himself took care in another twit to keep the door open for such deal, reminding that Equatorial Guinea as a sovereign state can seal any deal it wants with any friendly country.
The main reason for China’s great determination to set up a base or more on the Atlantic Coast of Africa is that Africa has become the largest regional component of China’s $1 trillion Belt and Road Initiative (BRI) to reconfigure the architecture of global trade, with the participation
of 46 African states.
The global management consulting firm Mc Kinsey calculated that approximately 10,000 Chinese enterprises in Africa, generated up to $180 billion of annual revenues in 2017 and projected that the figure might rise to $250 billion by 2025. The importance of such interests has therefore led Beijing to integrate military and security components into its partnerships with African states.
In 2015, at the UN General Assembly, President Xi Jinping pledged $100m in military assistance to African Union’s African Standby Force and to the African Capacity for Immediate Response to Crises.
The Forum on China Africa Cooperation’s (FOCAC) Action Plan 2022-2024 called for the strengthening of “the implementation of the China-Africa peace and security plan” which aims at supporting “the building of the African Peace and Security Architecture”. Such support is part of the “Guānxì strategy”, described by Paul Nantulya, a Ugandan research associate at the Washington-based Africa Centre for Strategic Studies as “a system of beliefs in Chinese culture that shapes how reciprocity is built through personal ties and mutual obligations”. This strategy has incited China to align its Belt and Road Initiative with the African Union’s Program for Infrastructure Development. 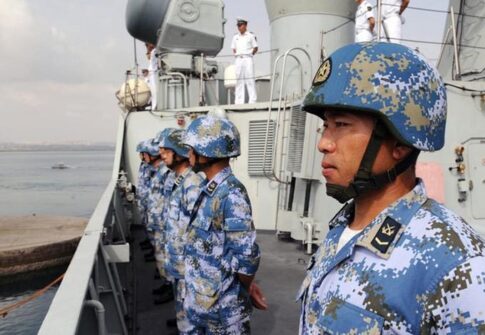 The joint interests have grown to such an extent that between 2008 and 2016, China’s People’s Liberation Army (PLA) has been allowed to make 22 naval port calls and 13 military exercises on the continent. The aim is to build a military presence in line with the strategy presented by the commander of the Lianoing aircraft carrier, captain Liu Zhe, in an essay published in 2017 which in summary says: “The further we are from our territorial sea, the safest will be our motherland”.
Beyond the protection of its interests, China’s eagerness to get a base on Africa’s Atlantic coast, is a response to the U.S. military presence in and around Taiwan and in the China Sea. Beijing’s African ambitions might cause a crisis similar to that of the missiles in Cuba of the 1960s, wrote Faustino Henrique in the Jornal de Angola on the 25 December 2021.
These moves shows that Africa has become a central issue of the world geopolitics. China’s appetite for the Gulf of Guinea is turning the continent into a major centre of interest for the North Atlantic Treaty Organisation (NATO) which is not entirely new. Already, in 2006, for the first time, NATO had organised a naval operation called “Steadfast Jaguar” in Cape Verde, which involved 7,800 troops backed with fighter planes and warships, in order to test a new response force, to combat terrorism in the area. (Open photo: The People’s Liberation Army Navy aircraft carrier CNS Liaoning and its battle group.Xinhua)