Boys collect plastic bottles on the streets while others take them from the polluted waters of Manila Port. Families that live by collecting rubbish. A Priest and a Sister are trying especially to help the children to live with dignity.

The bigger lads are always faster than little Charles in grabbing the best bits of rubbish. Along the streets there is another group collecting Coca-Cola bottles and plastic containers. When the bag is full, they take it to the recyclers to receive a little money to buy something to eat.
Then the sound of the rubbish lorry can be heard. The lorry comes from the well-to-do quarters of the city.  The boys jump aboard where they search the rubbish, breaking open some plastic bags in search of food. Charles is seven years old and runs after the lorry but he is too small to climb on board. Then the lorry goes round a corner and out of sight. “There is nothing we can do”, says his cousin Josette. Looking at her thoughtfully he replies, “I must learn how to swim”. 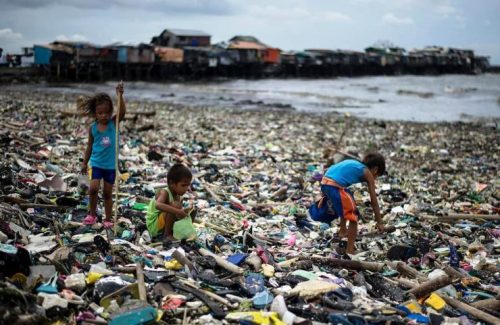 Manila is near the sea and a large amount of rubbish accumulates in the port basin. Sometime previously, a friend told him that if he knew how to swim he could earn some money. Charles is living there without any parents. He never met his father. He only knows he was in prison for years. His mother has a new family in another city where she has moved. Only his grandparents helped him, but they themselves are very poor. They live in a hut made of planks of wood and corrugated iron sheets. Tondo is a Manila slum. Both the land and the water are being increasingly polluted. The Philippines is the world’s third-largest ocean polluter; half a million tons of plastic are dumped into the sea there every year.Charles has decided to learn to swim. In a corner of the slum area there is a small bridge over the water and Charles dives in. In a short time he can manage to stay afloat, and he will soon be able to swim some distance. 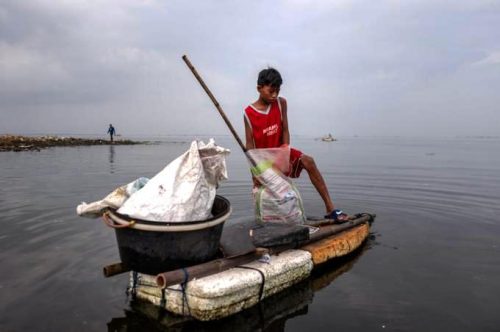 It is now time for the boy to start work. He wants to collect as much rubbish as possible from the port. Taking a running jump, he dives into the water, trying to make his way through the algae to where he sees a bottle. The surface of the water is covered with oil dumped by ocean-going ships that dock at the port and there is also a cloud of black smoke. At last Charles manages to grab the plastic bottle. When he tries to swim back he goes under for a moment and swallows some of the oily water before reaching the bank, gasping for breath. That evening, after a day spent at his work, he has a large yellow bag full of plastic bottles. He drags it through the narrow streets of the shanty town and sells it for fifty pesos to the dealer. That is his day’s pay. He uses the money to buy some rice and runs home. “Nana, Nana, look and see how much I earned today”. The grandparents are proud of him but are ashamed they cannot offer Charles a better life.

Charity in action
Every Sunday Father Reynaldo Daguitera, a Canossian working in the parish of Saint Paul the Apostle celebrates Mass at Happy Land, a small quarter with twelve thousand slum dwellers.  He tells us: “The parish is located in the densely populated area of Tondo with over 100,000 parishioners. It is close to the port and has sixteen Barangays (quarters) in zona 8 of the first district of Manila. 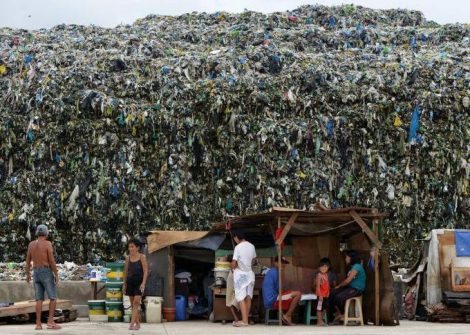 There are about 30,000 illegals in different colonies (Happy Land, Temporary housing, Aroma, Tambakan etc.). Some families live under a bridge. Most of them lack the bare necessities: clean water, electricity and sanitation”.He continues: “Because of the close presence of a large dump to Smoking Mountain shanty town, an increasing number of people, especially children, search through the rubbish for something to help them survive”. However, Father Reynaldo is moved by what he sees: “Seeing Charles and his friends swimming and collecting plastic in poisonous water breaks my heart”.Father Reynaldo is well known in the shanty town. He spends time going through the narrow streets, greeting everyone and offering words of comfort and encouragement. He often visits the families and shares whatever food they have. The people are happy to have Father Reynaldo in their homes. The priest knows that his sermons are credible only if charity is transformed into action. He wants to make a difference and, together with some volunteers, he has decided to organise food for the children, the too many children underweight and malnourished. The priest is helped by an eighty-year-old Catholic man who gets up early each day to prepare breakfast for a dozen or so children, starting at 6.30 am. 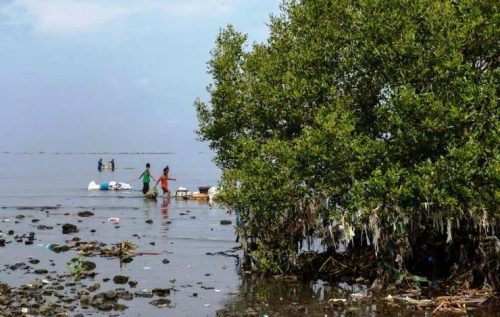 That was the first step. The children also need their lessons. Study first, then enjoyment, is the priest’s motto. The three R’s are the order of the day. Then there will be singing and dancing. Charles and the other children enjoy it all.
One day Charles found a treasure in the sea of plastic. Father looked at him in disbelief. He had brought home the door of a broken-down fridge and could not understand why. Charles dragged the door to the port and into the water. He had never seen a fridge before but knew that the polystyrene could be used to make a small boat. As proud as a ship’s captain, Charles now rows his boat to collect the plastic.
Seeing Charles rowing so strongly, Father Reynaldo smiles but, at the same time, is worried for Charles and the many boys and girls of the shanty town. He knows he cannot really change much to free the children from the vicious circle of poverty and plastic. 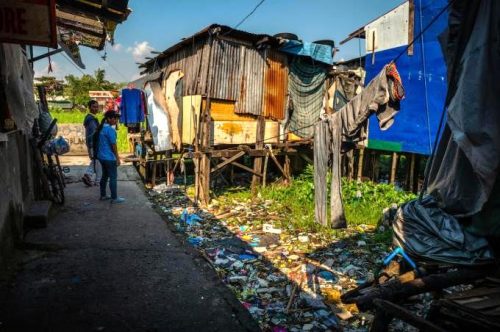 The priest set to work and found more supporters. He also persuaded Sister Mary John Mananzan to collaborate. In the past, the Sister was involved in many projects and is a genius at improvising.
They continue serving breakfast to the children and in the afternoon they have school classes followed by games.  Father Reynaldo has convinced some young doctors to devote some hours each week to organise a small clinic where they can receive patients, especially children. Sister Mary assists with the women regarding hygiene in their homes. They may be poor but they must be clean. They are also working with university students on a sanitation project.
Meanwhile, Charles dives in once more and comes out with another plastic bottle. “I have to continue collecting the bottles, otherwise we will have nothing to eat at home”, he says in a tone bitter beyond his years.”
Beatrix Gramlich