Welcome to the Murchison Falls National Park named after its famous waterfall. George Atube, the ranger who talks with animals, accompanies us during our tour through this spectacular place.

The Murchison Falls National Park is the oldest and largest park in Uganda which was established in 1952. It is situated in the north western part of the country, covering an area of 3,840 square kilometres and it is about five- or six-hours’ drive from Kampala. The waterfall that gives the park its name is formed from the 43-metre rift valley wall where the striking river Nile gushes through a small seven metre space. The rumble of the water that rebounds and crashes over the rocks creates a type of hypnotic atmosphere.
Murchison was the name chosen for this area, in the mid-nineteenth century, by a couple of explorers, Samuel Baker, a Scottish millionaire, and his wife Florence, a Hungarian woman who was sold as a slave as an orphan, and later was freed by Samuel Baker who married her. On an expedition searching for the source of the River Nile, the couple discovered the spectacular waterfall, which they named after Sir Roderick Murchison, the then President of the Geographical Society of London. 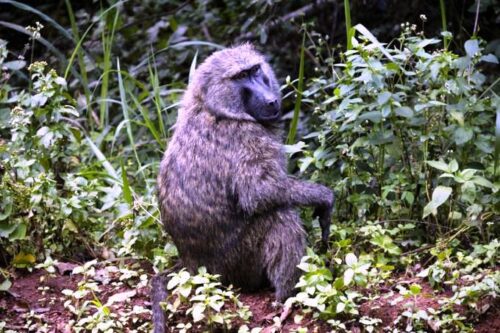 National parks in Uganda are managed by the Uganda Wildlife Authority (UWA). The UWA is in charge of conserving the country’s natural heritage, which includes animals, plants, natural features and ecosystems in general. UWA implements diverse strategies to conserve and sustainably manage wildlife in collaboration with several NGOs, trying to promote tourism and protect parks from threats such as poaching. This governing body that regulates wildlife conservation in Uganda is also in charge of  the formation of new rangers. As a result, the number of animals has increased and the country registers a growth of 15 percent in tourists every year. 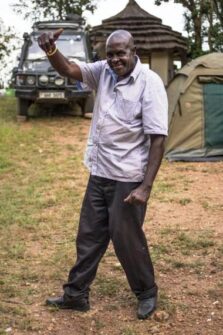 George Atube has worked as a ranger and guide for 39 years.

George Atube has worked as a ranger and guide for 39 years. Now he’s retired, but still continues to go to the park and tell stories to visitors. He is a tall, sociable and smiling man, and since he was very young he felt the need to protect animals. He tells us that the first time he saw elephants in the wild, he thought that that was the world he wanted to be in. He started to work in the Queen Elizabeth National Park.
Then, in 1975 he arrived at Murchison Falls. His task was to chase hunters. When Idi Amin encouraged the slaughter of elephants to sell their tusks, his soldiers roamed through Uganda’s national parks killing elephants with hand grenades. George remembers how he and other rangers confronted them. Decades of poaching and armed conflicts decimated one of the countries with the greatest concentration and variety of fauna across the continent. Of the 17,000 elephants in Murchison Falls there are only a few hundred left now. Many rangers also lost their lives.
In 2015 George’s work contract expired. It was time to return home and spend more time with his wife and their eight children. However, a company of tourist safaris calls him from time to time for short collaborations. “What I do now is just narrating stories to visitors. Tourism is very important for the communities that live in the surroundings”.  Twenty percent of the park’s income goes to local projects. George says that Uganda is experiencing a tourist boom. 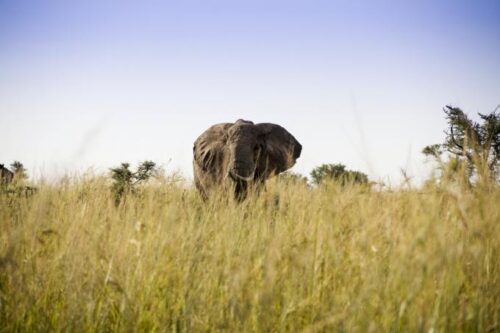 The Murchison Falls Park is bisected by the river Nile. The southern zone is a wooded area while the northern area is characterized by savannah where visitors and guides have the chance to perform car driving games. We travelled by car wishing to meet the animals living in this region. The best time to see them active is in the early morning and at sunset. We saw baboons looking at us in the most wooded area. While in the open space of the savannah we were able to see different species of antelopes. It is difficult to see lions and you have to be lucky. His unexpected encounter with a lion, is one of the stories that George often narrates to tourists. He says that one day, while he was walking through the park, he ran into a group of lions. Without trying to escape and fearing for his life, he addressed God asking him to save him from death. He says that God told him, “Speak to the lion”.  So, George looked at one of the lions and said: “Mr. Lion, you are thinking of killing me but I am not your enemy. My task is to protect you. Please let me go”. He tells that the lion replied: “It’s okay, George. You can go”. He concludes his story by stating that he learned that lions are very polite animals.” 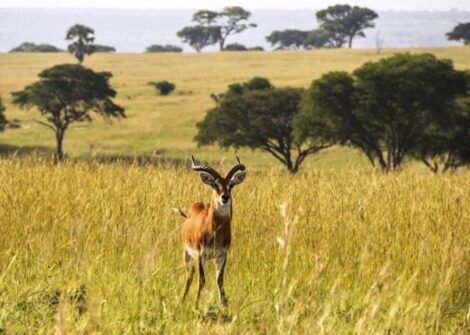 Human beings can be friends with any animal. Even with a lion, as long as they do not bother it”, says George and he adds that he is able to understand the language of animals and that they can understand him. He shows tourists how he imitates the trumpet of an elephant, the shriek of a baboon and the song of different birds. “I need to hear the sounds of nature. That is all the music I need”. The giraffe is his favourite animal. Those in the Murchison Falls Park belong to the Rothschild subspecies, also known as Uganda’s giraffe. There are only a few hundred examples left in the wild in Uganda and Kenya. These animals only sleep half an hour a day. “I love watching them. They walk silently and smoothly. They look like they are smiling and they do no harm to trees or anything else”. 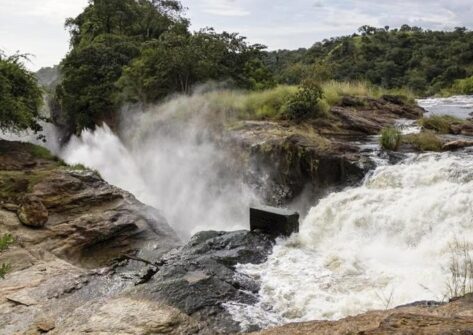 Giraffes, oribis, hippos, elephants live peacefully in this unique landscape. They seem accustomed to human visits. Vehicles stop, visitors observe them, take photos.  George speaks with admiration of each species. Once he saw twelve elephants picking up the bones of a dead elephant. They put together its remains in one place, with respect, and after ten minutes they left. “They behave as human beings do”.
When the sun sets, a Ugandan-style chickpea stew with a local beer in one of the park’s lodges or a tea in a tent next to Lake Alberto can be a good way to conclude the day. Meanwhile, we share the experience of our tour with other visitors and ask them if they had the chance to see lions. Or we just keep silent to listen to that music which George speaks about: the sounds of this amazing place that makes one feel as if existing in another world, the sounds of this space of freedom.