Financed by Istanbul, it also contains other structures: a congress hall, administration offices and a library. The presence of Turkey in Africa is nothing new: educational and social projects and the construction of mosques are being carried out in about thirty African countries.

It rises majestically, beautiful and immense. The Accra mosque is the largest of the modern type in all West Africa. Built on the model of the Blue Mosque of Istanbul, it  is also a sign of the close bond between the Islam of this part of Africa and that of Turkey. It was paid for by a group of businessmen based in the Hudai Foundation. But the country facing the Bosporus does not only provide finance; marbles, earthenware, ceramic tiles and the like all come from there.
The great mosque stands in Kanda, a residential area. Close by is Nima, one of the largest slums of Accra; inhabited mostly by Moslems, it is a hell of iron sheets, sewage and unbearable smells, next door to an oasis of prayer. Building began in 2012 – just one year after the opening of the Turkish embassy – and was expected to be finished within two years. Things did not go according to plan however and costs soared. 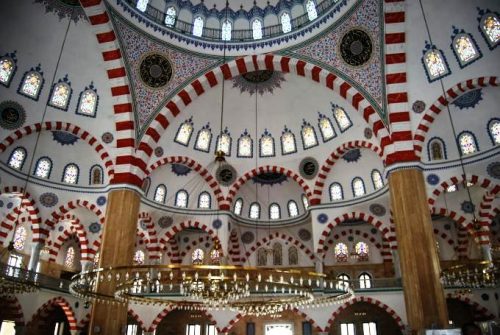 Now, however, the day of its inauguration is drawing near. We went inside to admire the work, still hidden from the faithful and the curious. The director of building is a twenty year-old Turk, come to Ghana to verify, inspect and direct the works. He is keen to emphasise that his country has nothing to do with the decision to realise a work of this type on African soil: “It is a matter between the faithful and it is they who are financing it”. However, it is a fact that the presidency of religious affairs of the Turkish Republic is also a partner in the project and under different competences, there is also the Ganader NGO. It must be said that Turkish presence in Africa is nothing new: the young supervisor explains that educational and social projects and the construction of mosques, though not of this size,  have been carried out for about thirty years in African countries. Recently, in Accra, Terminal 3, planned and constructed by a Turkish company, was inaugurated at Kotoka, the Turkish international airport.

It is difficult to know how much has been invested in this great mosque. The first estimate was said to be 10 million dollars but this had to be increased over the years.
This was because further structures were built within the centre: a congress centre, administration offices, a residence for the head Imam and a library (“No, not just for sacred texts”, my guide emphasised).

Then there is a male secondary school with places for 450 students, half of whom will avail of the catering and boarding services. There is also a Koranic school for women: two courses for girls between the ages of 12 and 18 and one for young women between the ages of 18 and 25 years. “It is important to spread the exact teachings of the Prophet among women”, we are told by Khadija, a 28 year-old woman and one of the course teachers, as she goes to check the number of enrollments in the courses and to feed her son whom she carries on her back, African style.

The theme of the ‘character’ of Islam is one that is dealt with in Ghana, a traditionally peaceful country where the Moslem, Christian and traditional faiths live together without any special problems. It represents a sort of barrier against the advance of Islamic extremism. The violence of Boko Haram in Nigeria, the attack in Ivory Coast claimed by Islamic State and al-Qaida and last year’s attack in Burkina Faso, at Ouagadougou, in front of the Turkish Aziz Istanbul restaurant, again claimed by Jihadists, have affected the Ghanaian community but are considered unlikely to take place here. 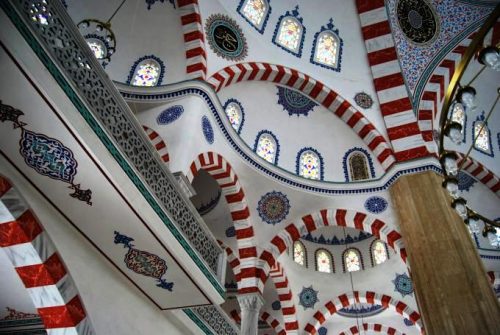 “Violence is not part of us, ‒ states Husein Abdur Rahim, Superintendent of the Ghana Police at the Central Mosque of Cantonment ‒ here we have centuries of blood ties between different memberships: in a single family we may find an Imam and a Sister, our children go to school with Christian children and vice versa; for us, brotherhood is above religion”. But there is yet another motive, the Superintendent of the police station situated inside the Cantonment mosque complex continues: “Leadership is an important factor. Here in Ghana we do not have Imams who use prayer times to preach and spread hatred and violence”.

Take nothing for granted

Nevertheless, the Imam Sheikh Osmanu Nuhu Sharubutu, repeats, it is necessary to be on the alert and not take anything for granted. It caused great surprise when some young Ghanaians, one girl among them, were found to be members of IS groups fighting in Syria. Those young people were stopped and arrested before they could leave. “They were brainwashed, the Imam explains, which shows a lack of understanding of Islam and that, here in Ghana, it is perhaps connected to that student movement that wants to question the authority of our leader”. 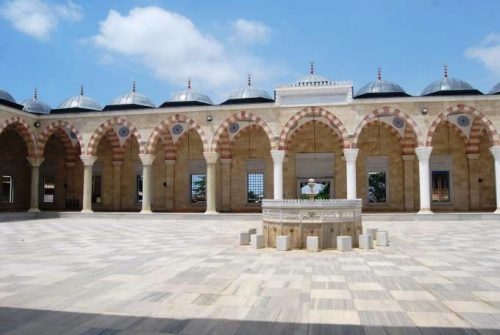 The student movement Abass Abdul seemed to be referring to may well have been the Knust (Kwame Nkrumah University of Science and Technology) in Kumasi, capital of the Ashanti region, one of the richest and most influential in the country. Elements of dissent have also emerged among the youth leaders in Brong-Ahafo region. “The intelligence service is working very well”, continues the Imam who himself often collaborates with the detective police.
A few years ago, the Ghana government agreed to accept two Yemenis released from Guantanamo. At the time, there were political fears and tensions which believed they might ‘pollute’ the minds of the youth.
“In fact, nobody ever heard about them afterwards”, the Imam said. “This means they integrated and that the fears were groundless”.
Ghana, is therefore an example of peace, dialogue and inter-religious co-existence. And each and every Ghanaian knows it is best to keep things this way.