In the vast semi-desert uplands of southern Ethiopia, and in the northern desert region of Kenya, the Borana have their home.

They believe themselves to be the first of the groups that form the great Oromo family. “We were the first to arrive, at dawn”. The experts agree that the Borana — around half a million people, of whom –100,000 live in the south of Kenya — have preserved the most integral and original linguistic, cultural, social and religious characteristics of the entire ethnic group. Among the Oromo of western Ethiopia, the term ‘borana‘ is still understood as meaning one who definitely belongs to the race of the Oromo. Among the elements that confirm that the Borana constitute the original primordial strain of the Oromo we find: the conservation of a social system and a semi-nomadic and pastoral lifestyle; fidelity to the practice of their own traditional religion; the continuation of an essentially egalitarian social structure based upon the system of the gadaa and the role played by two relevant institutional figures: the abba gadaa (‘father of the gadaa‘, the highest political authority) and the qallu (traditional priest). 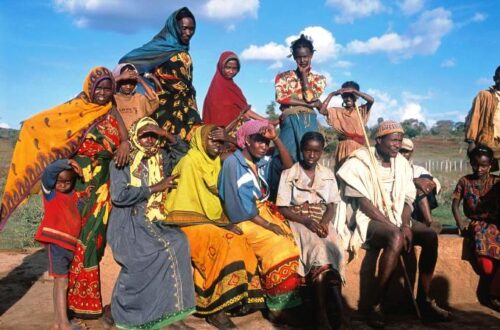 From a religious point of view, they feel they are especially close to Waaqa, the creator god seen as the source of all that exists: “He gives life and continuity of life to all things”. They speak of him as “the beginning and the end”: “Waaqa is one and is many”, infinite and infinitesimal at the same time. In “Waaqa everything is present and everything exists in him”.  He is the “weaver who unites past, present and future in a single cloth”; in an even more meaningful way: “He is the one who keeps together bone, flesh and spirit”.  All the Borana frequently turn to Waaqa, praying to him and recognising his omnipotence and goodness. There are endless invocations for peace, rain, health, the growth of the children and the stock.

The Gadaa System
This is the sacred framework into which every new-born Borana child is inserted. His journey of insertion into society begins only after the name-giving rite with which his right to guard the herds, to express his opinion in the assemblies and to take part in war is recognised. By means of a series of periodical rites proposed by the gadaa, he gradually forms a close network of relationships that mark his life, helping him to cultivate his own identity and to assume his role in society. 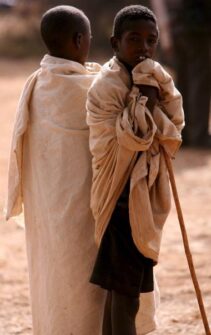 The structure of the gadaa is first of all a system of traditional power, exercised democratically and based upon a stratified hierarchy, founded upon the seven “age classes” (or lubba) into which the population is divided. The men follow the phases of the long passage from infancy to old age together.
Each age passage (once every eight years) brings about a rise in the social hierarchy, as they enter the higher lubba. The phases are: that of the daballee (1-8 years), gammee (8-24 years; this is a “repeated lubba” of 16 years), kussa (24-30 years), raaba didiqqaa (or minor raaba, 30-38 years), raaba gugurdaa (major raaba, 38-46 years); gadaa (46-54 years) which is the most important lubba; its members are also called qommicha, (meaning ‘strong ones’) and yuuba (55-78 years; three periods of eight years during which the men are free of all directive responsibilities). When they have completed the three periods as yuuba, the men become gadaamoji, members of the class of the elders: they are free from all political and economic activity and may assume only a ritual role.
The women are excluded from the age classes and from the exercise of power. It is their duty to look after the children and the home. Nevertheless, among the Borana, the women enjoy not only a high level of autonomy and esteem but also have their own times and spaces to organise themselves on a social level and to assume specifically ritual roles within the female ceremonial environment. 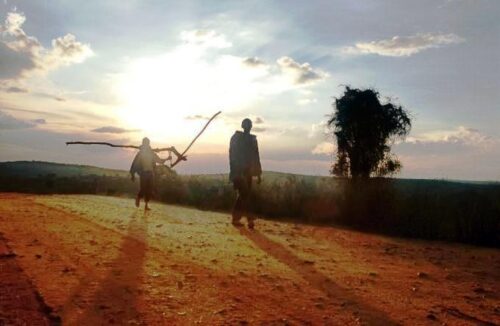 All religious, ritual and political responsibility is vested in the members of the gadaa, the lubba of the “strong ones”, which gives its name to the entire system. It is said that the gommi-cha “nama sederà Boraanaa cufa harba qabu” (hold in their hands all the Borana laws and customs).
They rule under the authority of the abba gadaa (the father of the gadaa), who is elected democratically and holds office for eight years, assisted by special counsellors called waayuu (a word which means “holiness”, “respect”, “blessing”, “goodness”, “peace”), chosen from among people of good standing.
In times of emergencies or critical situations in the life of the whole group, the abba gadaa may call the gumii gaayoo (“assembly of many”, open to all the Borana) to render the decision-making more democratic. As a rule, however, the gumii gaayoo is called every eight years. This is a gathering attended by tens of thousands of Borana from Ethiopia and Kenya. The last general assemblies were especially important since they established: exact rules to be followed in the matter of guarding and using water sources; which land was to be used for cultivation and which for pasture; the creation of reserves of fodder for the calves; the protection of indigenous plants; the prohibition of the illegal sale of water; punishments for drunkenness. (P.C.)