The Ghanaian band Santrofi demonstrates that Highlife music is still a rich and vital force.

Artistically speaking, Highlife is the music of modern Ghana; a mix of pop and jazz not without ethnic influences imported from Nigeria in the first decades of the nineteen hundreds and exported to the world after the end of the Second World War, thanks to the worldwide success of a giant of Afro music, Fela Kuti.
Breathless sessions with penetrating guitars, hypnotic rhythms and colourful singing characterise the sound, based upon a handful of notes that not only immerses us in the typical panoramas of this splendid portion of Africa but even makes us feel an immediate instinct to sway or dance to these splendid songs so pleasing to the western ear. 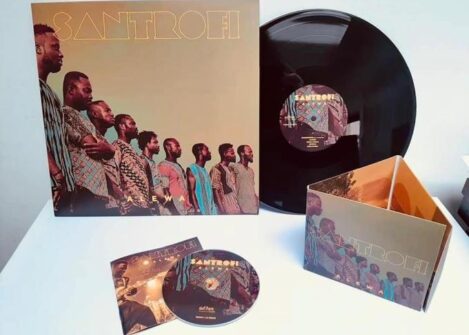 While the unchallenged head of this school of music is the late lamented E. T. Mensah (who died in 1966), one of the best-known groups today is certainly the large ensemble of the Santrofi, a group of musicians and singers well known in the west due to their participation in a large number of western festivals of world music, including the Womad of Peter Gabriel, the best known of all. Led by bassist Emmanuel Ofori, the nine Santrofis export the modern soul of Ghana and a philosophy of a life that is simple but full of values.
In Akan mythology, Santrofi is the story of a rare and precious bird, identified by its lively colours and its four wings. It is so unique that it was forbidden to hunt it; if held in captivity, it was a bad omen; if seen and allowed to fly away, a great treasure would be lost.
Santrofi is venerated for the clarity of its vision and its transformative beauty together with the power of its singing: the band aims at exemplifying all these traits in their innovative interpretation of the vintage Highlife sound of Ghana. 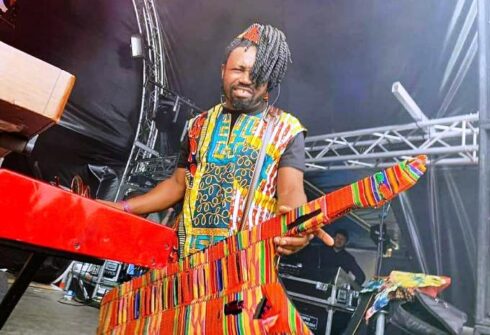 It is the desire of the group to fuse the musical culture exported to Africa from the West with autochthonous music: without counter positions but instead by nourishing its own music with a sincere desire for sharing and universal brotherhood, without ever forgetting the great themes and the great challenges to which Africa is called to respond to today. These include the ecological equilibrium that must be restored, the need for authentic human relations and last, but not least, the dream of a new pan-Africanism, to the extent that the album also contains the voice of the first president of independent Ghana, Kwame Nkrumah, one of the most charismatic personalities of post-colonial Africa.
Santrofi’s debut album of last April ‘Alewa’ captures the influence of epochs that are separate but intertwined, of the journey of the Highlife music of Ghana, unlike anything seen before, either in recent years or long ago. It is interesting to note that ‘Alewa’ is also the title of one of the tracks on the album.
The metaphor of a local black-and-white-striped sweet representing the symbol of independence, of harmony, of the multi-instrumentalist Sanofi that alternate both their places on the record as well as on the stage of progressive musical liberation. ‘Alewa’ is also a metaphor that alludes to the need to recognise, accept, tolerate and embrace racial diversity to build a world of love and unity. 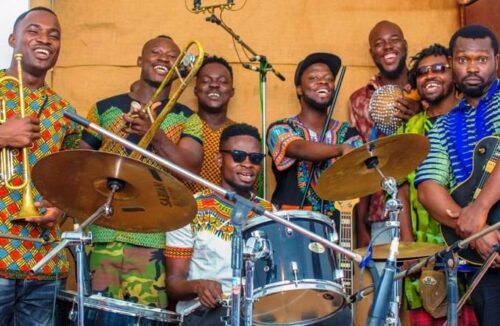 On bass guitar is Emmanuel Ofori, electric lead guitars, Dominic Quarchie (Ghana’s Music Awards’ winner of instrumentalist of the year 2018), on the rhythm guitar and lead vocals Nsoroma, Bernard Gyamfi on trombone and shekere, Norbert Wonkyi on trumpet, Flugelhorn and bells, Prince Larbi on drums and vocals.
Emmanuel Boakye Agyeman on organs, fender rhodes and vocals, Victor Nii Amoo on percussions, and Kofi ‘IamBeatMenace’ as the co-producer, audio engineer and brands Coordinator.
One characteristic of the band seems to be that they have found a winning formula of elegant dance steps, easily learned songs to be sung with rhythm guitar accompaniment, drums and melodic harmonies. With musical influences that range from Highlife and Afrobeat to straight old-fashioned funk, the music of Santrofi is impressive, besides being spectacular entertainment, all of which allows us to hope for future tours and their next album to be released this year.