For some time, the Catholic and Protestant communities have been a target for Islamic groups attempting to destabilise the country. They are also trying to weaken its inter-ethnic and inter-religious ties.

It was an ordinary Sunday morning in Tanghin, in the northern outskirts of Ouagadougou. The sun, already high in the sky, shone down on a large crowd of people gathered round the gates of the church of Saint William, the largest in all of Burkina Faso. Many had brought their own chairs or small stools with them as there is never enough to seat everybody in the church.
The Catholic community of this vast urban conglomeration at the doors of the capital city counts more than fifteen thousand faithful. Construction and extension work has been going on for years: “The parish only started in 2001, so we are still young”, forty year-old Father Nestor Nikiema comments, smiling, as he watches the choir, altar servers and musicians enter the church. While waiting for Mass to start, they test the microphones and tune their instruments: a keyboard, two guitars, a base guitar, drums and a traditional djembe drum. Strident, whistling sounds from the loudspeakers can be heard all over the compound. 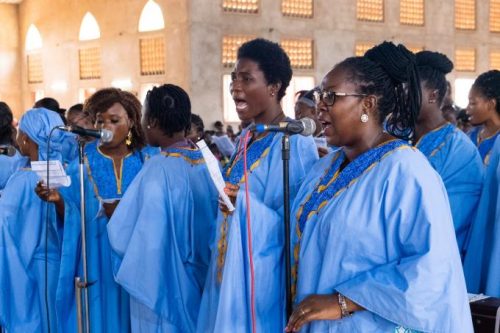 From a distance, the building towers above the single-storied houses scattered around the area. A tall campanile stands in the centre of the facade of the cruciform church. There are broad cloisters to protect those who cannot find room in the church from the scorching sun. Women in their coloured veils pray with their Rosary beads as barefoot children scamper around and men dressed in their Sunday best exchange greetings.
The inside of the church, rather than a place of worship, looks like a large industrial shed. Some images of Our Lady scarcely relieve the monotonous grey of the walls and cement pillars; small fans blow hot air down on the people as they go to their places. The rows of seats and stools are soon filled as is the rest of the available space in the church. The church overflows to the outside where people take their places in the shadow of the walls or under the small trees of the compound. 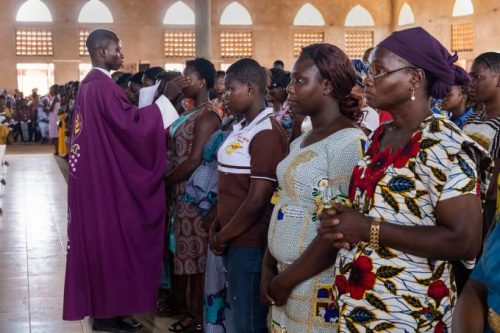 When Father Nestor reaches the steps of the altar, a broad pedestal in cement with some as yet unconnected electrical sockets close to the floor, the noise suddenly ceases, all is quiet and all stand to begin the Mass.  The Sunday Mass lasts a couple of hours and is celebrated in French so that all the national ethnic groups can understand (there are 65 languages spoken in the country). In recent months, due to increasing violence by various neo-jihadi groups, many people have taken refuge in the cities.
The main terrorist groups active in Burkina Faso are Islam Ansarul, Jama’at Nusrat al Islam wal-Muslimin and Islamic State in Great Sahara. Islam Ansarul is mainly active in the province of Soum and the bordering provinces of the north. Islamic State in Great Sahara (a branch of Isis in Sahara-Sahel) works mainly in the border lands between Niger and Burkina Faso, while the groups which now form part of the Jama’at Nusrat al Islam wal-Muslimin coalition (Ansar Dine, Macina Liberation Front, Al-Mourabitoun) are based in northern Mali from where they launch attacks in Burkina. 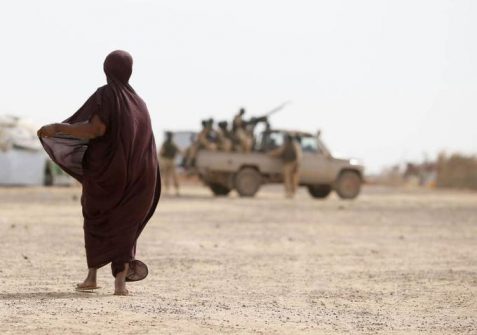 Some of these groups have sworn allegiance to Al Qaeda such as those which make up the Jnim coalition led by Iyad Ag Ghaly. Among these there is also Malam Dicko, founder of Ansarul Islam, a disciple of Hamadoun Koufa, a radical preacher who founded the Macina Liberation front. Others, like the Islamic State of Great Sahara, follow the Islamic State.Relations between these groups are complex and not always stable. However, all of them explicitly claim responsibility for attacks in Burkina Faso. Some attacks, whose perpetrators have not been clearly identified, are also attributed to them.
According to the UN Office for Humanitarian Affairs, since 2015, the conflict has caused more than 400 deaths, 170,000 homeless and 1.2 million displaced people in urgent need of humanitarian help. “Every Saturday, we pray in this church with our Muslim and animist brothers for the restoration of peace to our country, Father Nestor tells us, we never saw anything like this before. These terrorists come from outside and they are doing all they can to destroy the social cohesion and peaceful coexistence that has always flourished here”. In their Jihadi project of national and regional destabilisation, the groups active in the north and the east of Burkina recently altered their objective, moving from mosques and Imamas whom they consider to be deviant, from soldiers and state administrators to community and religious, especially those who are Christian and Catholics in particular. 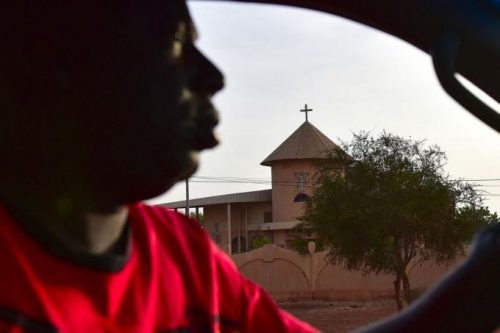 At a deeper level, besides threatening local leaders, the ‘bearded ones’ (as the Moslem fanatics are called) are now aiming to undo inter-ethnic and inter-religious ties which have always been the basis of coexistence between the different peoples of the country. “Here, marriages between people of different denominations are very frequent, showing the high level of brotherhood that binds us to followers of other faiths”, Father Nestor concludes.
At another church, less than a kilometre from St. William’s, another priest emphasises some other aspects. “By now the entire Sahel-Sahara belt is in the grip of growing and spreading banditry. It is organised crime that dictates the law in all the region”. Giorgio Debernardi was formerly Bishop of Pinerolo, a diocese in the north of Italy. On his retirement at the age of 78, he found his ‘second youth’ in Burkina Faso.
The small chapel in which Mons, Debernardi celebrates Mass was only recently opened within the compound of the Shalom Private Polytechnic, a university founded in 2010 by the Shalom Movement, a Catholic association involved in training and the culture of peace. Each year, hundreds of Burkinese students, of various religions, frequent the faculties of agriculture, law and journalism communications. It is an example of education in excellence in a country where, in recent months, more than two thousand schools were closed due to Jihadist threats. Some institutes in the north and the east have been burned down. Teachers have been beaten and forced to flee for their lives, depriving more than 330,000 children of education.

As if all this were not enough, climate change has been especially violent in the northern regions of the country where the shortage of water and arable land is exacerbating inter-ethnic conflict between semi-nomad pastors (Peul) and sedentary farmers (especially those forced to move) in the area. These events are following the pattern of the seasonal armed conflicts that take place in nearby Mali and, to a lesser extent, in Niger: historical disputes over the management of lands which are today being stirred up and used by Jihadi groups to undermine areas that are already socially and economically fragile. “It is very easy for people from outside if they realise what sort of condition they are in. ‘Let us come in and things will change’, they say”, Mons. Debernardi affirms with some bitterness. This, according to the religious, is the origin of the spiral of violence that, in recent months, has afflicted the protestant and Catholic communities: on 13 May, a Marian procession was attacked in Zimtenga, in the north of the country, when a number of Jihadists killed four of the faithful and destroyed the statue of Our Lady. 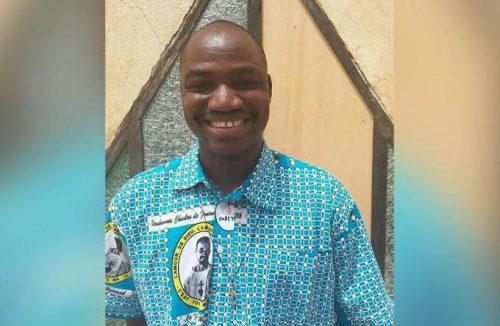 Father Simeon Yampa was killed in Dablo, May 14.

On the following day it was the turn of the Catholic church of Dablo, also in the north of the country, where six people, including the parish priest, were murdered during Sunday Mass; again, on the following day, the church was attacked in the village of Dolbel, in the north west of Niger, in an area bordering with Burkina Faso and Mali. Despite everything, “ This is a Church on the move”, is Mons. Pier Giorgio’s comment as he remembers some martyred confreres: the young Burkinese priest Joël Yougbaré, kidnapped in mid-March at Djibo, and the Spanish Salesian Antonio Cesar, murdered on 15 February at Nohao, in the east of the country. He ends with words of hope: “Our dream is that Burkina Faso may return to be a nation where all resources, social, religious and political, come together to create real national unity”.