Out of 55 African countries, only 18 produce gas, although 87 per cent of African production is supplied by three countries: Algeria, Nigeria, and Egypt.

The war in Ukraine has suddenly put Africa in the foreground, with the wheat crisis, but also with the opportunities created for its energy sources, mainly gas. The EU hopes to draw on this, as it seeks to become independent from Russian gas, and for this reason, in mid-May, it launched an energy plan (REPowerEU) in which, in addition to renewables, gas maintains a strategic role. This situation has restored centrality to the Mediterranean, which, as it looked towards the East, had been marginalized. As a crossroads of civilizations, the Mediterranean is the new gas route for Europe, with gas pipelines or methane tankers carrying liquefied natural gas (LNG).

A severely unbalanced market
Africa did not wait for the Ukrainian crisis to exploit its gas, even if in the world context its importance remains modest.
Africa possesses, as of early 2021, 6.9 per cent of the world’s proven gas reserves, against Russia alone with 19.9 per cent and the CIS countries (Confederation of Independent States) with 30.1 per cent while Turkmenistan alone owns 7.2 per cent of world reserves, more than the US which has 6.7 per cent, and the EU with 0.2 per cent (Source: BP Statistical Review of World Energy 2021). 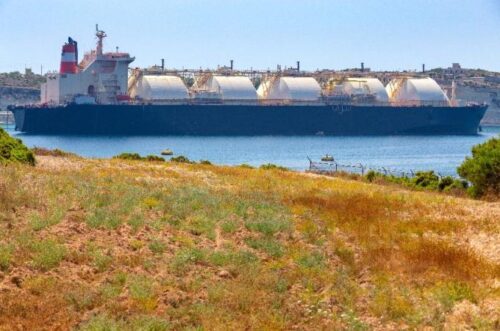 Huge tanker gas carrier at the berth of a power station on the island Malta. 123rf.com

The gas market is therefore highly unbalanced: two countries, the United States (23.7 per cent) and Russia (16.6 per cent), produce 40.3 per cent of total world production. The most economically developed countries (OECD) own 10.8 per cent of reserves, produce 38.4 per cent of gas and consume 46 per cent, compared to 89.2 per cent (reserves), 61.6 per cent (production) and 54 per cent (consumption) of non-OECD countries. 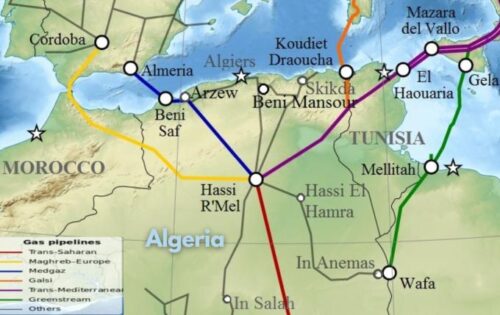 There are five medium-sized producers: Libya, Angola, Mozambique, Tunisia, and the Ivory Coast. It should be noted that African gas is, in proportion, destined more and more for the consumption of families and businesses, for the production of electricity and less and less for export.
While in 1970 only two countries were gas exporters (Algeria and Libya), today there are seven African exporting countries: Algeria (58 per cent), Nigeria (28 per cent), Mozambique (5 per cent), Libya (4.5 per cent), Angola (2 percent), Egypt (1.5 per cent). Europe, even before the Ukrainian war, was the main source of outlet for African gas with 62 per cent, 43 per cent through pipelines and 57 per cent by ship in the form of LNG, while only 10 per cent of African gas is destined for Africa (data relating to 2020, source BP).

The other strategic challenge
Algeria is not only the largest producer of African gas, but also the country best equipped for transportation, relying on three gas pipelines linking it to Europe, via Spain and Italy, and on natural gas liquefaction units (LNG) and ports. Of the two gas pipelines that connect them to Spain, Algeria has suspended transport through the one that passes through Morocco, the GME (Gas Maghreb Europe), following the breakdown of diplomatic relations and the increase in tensions between the two countries due to the Western Sahara issue.
Algiers committed itself, even before the Ukrainian crisis, to boosting transport through the gas pipeline that links it directly to Spain (Medgaz) and the one that reaches Sicily via Tunisia (TransMed). We should also remember Libya and the Greenstream gas pipeline that reaches Gela in Sicily but which, given the tension in the country, is not a candidate for expansion for the time being. The Algerian network originates in the Sahara, and this brings it closer to Africa’s largest gas reserve, that of the Niger delta in Nigeria. 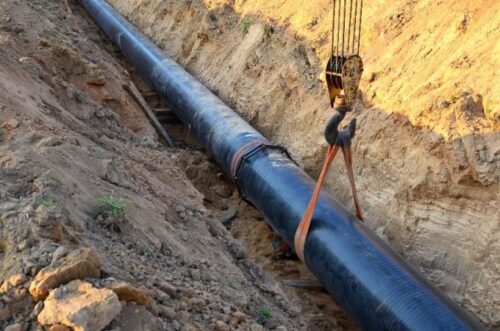 The country is engaged in two pipeline projects, still on paper. The first leads through Niger to Algeria and the European market. The second passes under the sea along the coast of West Africa and is expected to make landfall in Morocco; it would be an extension of the gas pipeline that currently carries gas from Nigeria off the coast of Ghana, serving Benin and Togo. Given the costs, investments and time required for implementation, it is unlikely that both projects can be implemented. For this reason, the economic-diplomatic battle between Algeria and Morocco accelerated due to the invasion of Ukraine.
Meanwhile, on 25 July, Algeria’s state-owned oil company, Sonatrach, announced three major oil and gas discoveries in the Sahara desert.
The first discovery is a gas condensate located in two different reservoirs which were found following the drilling of an exploration well in the Illizi Basin, located at the border with Libya. According to the company, the flow rates recorded by the two reservoirs amounted to 513,000 cubic metres/day of gas during the test phase.
Another discovery of crude oil was made in partnership with Italian oil company Eni in the northern region of the Berkine Basin. ‘During the production test, the well produced 1,300 barrels/ day of oil and 51,000 cm/ day of associated gas’, said Sonatrach. The two discoveries are located close to existing oil and gas facilities. 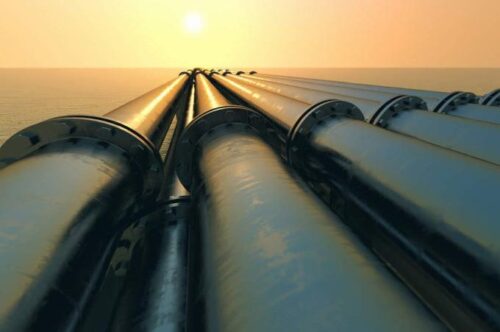 The eastern Mediterranean has been shown, more than a decade ago, to be rich in gas. The dispute between Turkey and Greece over the delimitation of their respective exclusive economic zones is preventing gas research projects and the passage of a gas pipeline, which could also affect Cyprus, whose northern part has been occupied by Ankara since 1974, and Israel. Thus, the EastMed gas pipeline project that could carry gas from Israel via Cyprus to Greece and to Italy remains on paper for the moment. In the meantime, Turkey has become a strategic gas distribution pole for both Russia and Europe, and this also explains the role that Ankara plays in the Ukrainian crisis.

Gas and ecological transition
Faced with the challenge of gas for Europe and Africa, the climate dimension is placed on the back burner. The Africans want to take advantage of the upcoming COP27 climate conference, to be held in November in Sharm El Sheikh, Egypt, to take stock of the possibilities of exploiting their energy sources. In particular, they ask that gas be considered as an element of the ecological transition and that therefore Africa can take advantage of it longer than expected to bridge the gap with the West. We may take for example the electricity grids, ready to receive renewable energy, something still largely lacking in much of Africa. As for Europe, the Russian gas crisis has revived fossil and nuclear sources. Among the victims of the Russian invasion of Ukraine, we must now also count those caused by the abandonment of more stringent policies to combat climate change. (Open Photo: Gas storage spheres tank in petrochemical plant in sunset. 123rf.com)