A genus Blighia comprises only three species and is endemic in tropical Africa. It can be distinguished from the other two species by its leaflets having tufts of hairs in the axils of lateral veins. It is an indigenous tree widely distributed in the tropical forests in the Sub-Saharan Africa. It is commonly referred to as triangle top.

The plant grows to form a dense crown, usually up to 30 m in height. The bole is often quite short, usually straight, and with a girth of up to 1.80 m in diameter, slightly fluted at the base. The compound, alternate leaves are 80 to 300 mm long. The main vein of the leaf (rachis) and 40 mm stalk are both hairy. The leaflets can be found in 1(2)-4(5) opposite pairs, with the uppermost pair usually the largest. The shiny, dark green leaves are hairy and paler underneath, with wavy margins. It also has a drip tip and the midrib and veins stand out. 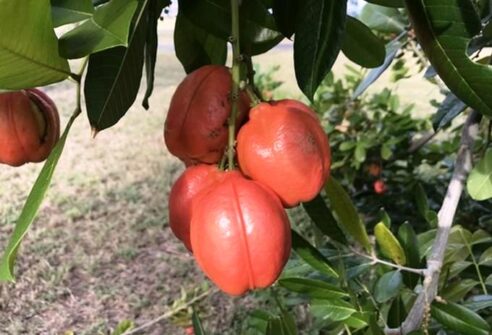 The young leaves can be distinguished by their shine and pinkish red colour. The small, sweetly scented, whitish to yellow flowers are in spike-like, axillary sprays. When ripe, the fruits split into woody, red-lined valves to expose shiny, black seeds resting on a soft yellow base. With age, the seeds will hang from the dried capsules. It is found mostly in moist evergreen forest, but also in semi-deciduous forest, in more dry areas in riverine forest, and in wooded grassland and is often associated with termite mounds, at about 1,900 m above sea level. 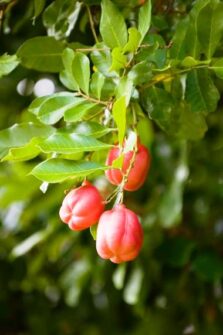 The tree is harvested from the wild for local use as food, medicine and source of wood. It is sometimes grown to provide shade for coffee and is commonly planted as a shade tree.
Ethno-medicinally, Blighia unijugata (Family Sapindaceae) has been used in folk medicine to treat and manage various health conditions including rheumatism, kidney pain, stiffness, leprosy, eye aches, cough, headaches, nausea, fever, vomiting, dizziness, as well as high blood pressure. The plant has been reported to enhance childbirth process due to its oxytocic action. It is also recognized for its sedative and analgesic properties.
As an analgesic plant, it is used in treatment of rheumatism. The seed infusion is given to prevent vomiting. The concentrated decoction/infusion liquor resulting from heating or boiling the bark, is taken to treat fever, and is also used as a purgative. The bark pulp is applied as an enema. The leaf decoction is used to treat vertigo; a feeling of being in motion when not. Leaf pulp is administered as an embrocation to serve as rejuvenator and relaxant.
The leaf infusion is used in vapour baths for the treatment of fever in children, and as tonic. The leaf decoction is also used to treat fatigue. The roots are used to treat   postpartum bleeding (haemorrhage) and boils. The fruits have also been used in some communities for the treatment of nausea and vomiting. 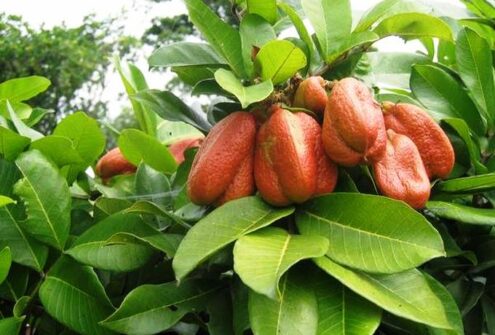 The leaves of the Blighia unijugata medicinal plant are traditionally used in the management of depressive psychosis. The numerous medicinal activities of Blighia unijugata plant may be attributed to a number of phytochemicals in it including polyphenols, tannins, flavonoids, saponins, alkanoids, sterols, polyterpenes, reduced sugar, coumarins, quinones, and cardiotonic glycosides.
Apart from its uses in traditional medicine, the leaves of Blighia unijugata can be cooked and eaten as a vegetable. The pleasantly scented flowers are sometimes soaked in water and used as a fragrance. Its other social applications are in soap making; the seeds, because of their oil content, and the seed coat because of its potash content, are burned and the ashes used in making soap. The wood of this tree is durable, with a reddish heartwood, and is used for furniture and building. Twigs, leaves, flowers and fruits are softened by soaking in a liquid and used as fish poison. (Open photo: CC BY-SA 3.0/Jerome Walker)