Rebecca Bitrus, a former Boko Haram captive, shares with us her experience but above all the strength of her faith during captivity – and how she managed to survive.

She speaks slowly. In her right hand she holds a Rosary. It is difficult for her to speak of her past. For two years she was in the hands of the Islamist group, Boko Haram.  Her mind goes back to that August of four years ago when she was kidnapped.  Rebecca recounted: “Late one evening the militants of Boko Haram came into our town of Baga in the north-eastern Nigerian state of Borno, from where my husband Bitrus Zachariah and I lived with our two small children, Zachariah and Joshua. At the time, Zachariah was five, and Joshua was three. My husband alerted me. “I told my husband to go because I knew that he would be the terrorists ‘primary target’”.
She pleaded with her husband to ‘run and save his life’, and fervently urged him to leave them behind. He succeeded in escaping. “I tried to flee but I was captured with my sons and taken into the forest”, said Rebecca. That was when her long journey of suffering began. 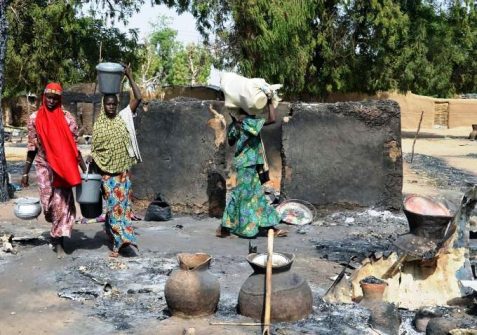 The Jihadi group Boko Haram have become one of the most brutal terror organisations. Since the beginning of its uprising in 2009, more than 3 million people have left their homes, at least 250,000 have fled into Cameroon, Chad or Niger and more than 20,000 people have been killed. The group has kidnapped thousands of adults and children during the course of the conflict. The most notorious episode was in April 2014, when they took 276 girls from a school in the town of Chibok. While many of the Chibok girls have since escaped or been released, around 100 of them are still thought to be held by the group.
Recently, on February 21, the Jihadi group stormed a secondary school in Dapchi, north-east Nigeria. More than 110 schoolgirls were kidnapped in what was being reported as their largest mass abduction attempt since the notorious 2014 Chibok kidnappings. The school is only 275 kilometres (170 miles) from Chibok. Last month, Boko Haram released 101 schoolgirls, who they had abducted in Dapchi.

Rebecca Bitrus, was abducted by Boko Haram in August 2014 and she was a prisoner with Boko Haram for two years. She was forced to take the name Miriam; she said that she was immediately put to work in a labour camp. She said she had been pregnant with her third child at the time of her abduction, but lost the baby due to the strain of her captivity. After arriving in the camp, she said the fighters wanted her to convert to Islam. Having been raised a devout Catholic, Rebecca refused. As a result, she said, the militants grabbed her youngest son, Joshua, and threw him into a river. 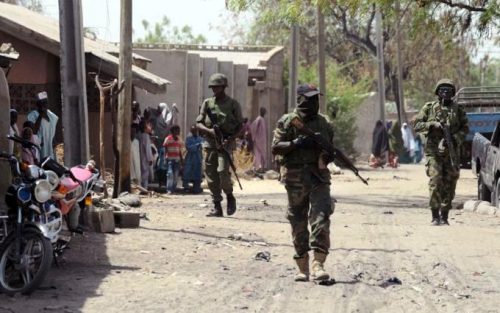 “I have lost him”, she said, explaining that after the incident, she went through the motions and pretended to accept the Muslim faith, “but never did”.Each time they were forced to recite the Muslim prayers, Rebecca said she would instead pray the Rosary, asking God to free her “from the hands of these wicked people. I was never convinced about Islam. I kept my trust in the Lord and I was praying the Rosary with my fingers,” she said. “I am convinced that the prayer of the Rosary saved me from captivity”.Rebecca said that at one point, she was forced into a marriage with a Boko Haram fighter, and – like many of the other female prisoners – subjected to repeated rape. She eventually became pregnant and gave birth to a child on Christmas day, whom she named Christopher, in honour of Christ. 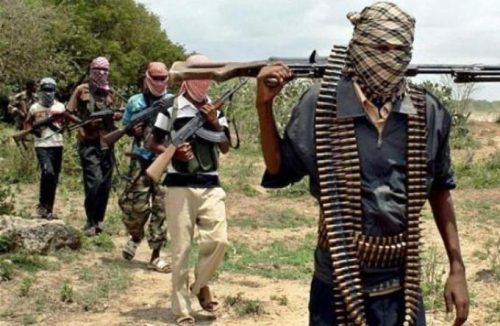 Meanwhile, day after day, her husband Zachariah searched for his family and met and spoke with a lot of people coming out of Baga. “I kept on asking them of the whereabouts of my wife, but no one could tell me any good news”, he said. “I became depressed with severe migraines and my blood pressure hit the roof. Some soldiers assisted me with a shelter to lay my head. They gave me some money, which I used to transport myself to Maiduguri. My uncle pleaded with me not to be discouraged. He even took me to the hospital for medication. He tried to renew my hope, but he couldn’t stop the nightmares.  Leaving behind my family and everything else that I ever had, was not an easy experience”.

After two years, Rebecca said, her chance for escape finally came when the sound of gunfire and bombs could be heard in the camp, indicating that Nigerian troops were closing in on the position. A group of prisoners organized an escape, and she fled into the forest with her older son and the child she had conceived in captivity, who at the time was about six months old.In the forest, they spent nearly a month with almost no food or water, she recounted, adding that mosquitoes constantly attacked them and she developed severe rashes that have left scars on her body. Despite it all, Rebecca said, “I never gave up. As soon as I left the camp and we got away, I knew God was going to protect me”, she said. “I put my trust in God”. 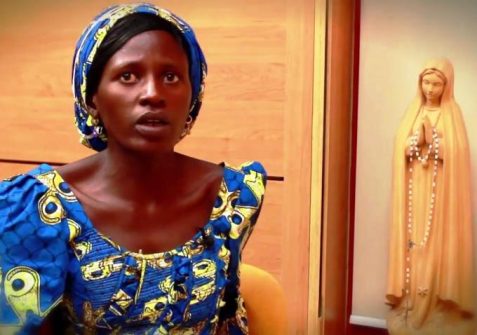 With the help of a local community, they were eventually pointed in the direction of the Nigerian army. The troops initially didn’t believe that Rebecca was Christian, and thought she was a member of Boko Haram. “They were very sceptical of me and said, ‘You must be Boko Haram’. “I told them I wasn’t but that I was one of the women they abducted and that I had now escaped”.
She told the soldiers her name was Rebecca – even that, she explained, was a small act of liberation, since her captors had forced her to take the name ‘Miriam’.“One of the soldiers who was a Muslim told me, ‘If you’re a Catholic, prove it,’ and asked me to recite some Christian prayers. “I prayed some ‘Hail Mary’s’ on my fingers, and when I came to the tenth one, I said the ‘Glory Be’ and made the Sign of the Cross”, she said. With that, the troops were convinced, and after having her treated in a nearby hospital, they transported her to her hometown of Maiduguri. She made her way to the local Catholic Church, where she was reunited with her husband – with each having believed for two years that the other most likely was dead.Having finally made it home, she said, she was still wondering what to do with the child she carried out of the camp. 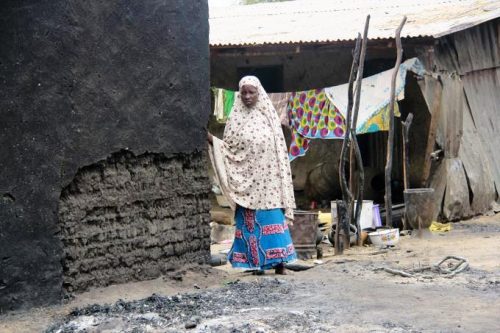 When she first escaped, Rebecca said she struggled to accept her youngest child, who was six months old at the time, because he reminded her of the atrocities she had suffered. However, the local bishop, Oliver Dashe Doeme, talked to her and encouraged her to both ‘accept and love’ the child, saying he could grow up to be ‘an important person in life, a person who could help me’. She voiced gratitude to Bishop Dashe Doeme, saying he “cared for my needs and I am grateful for that”. Although it was not easy, Rebecca said she was eventually able to forgive Boko Haram for everything she endured.
“I am convinced about Jesus’ teaching on forgiveness”, she said, noting how Jesus himself was tortured, treated unjustly and condemned to death.However, “even on the cross Jesus forgave those who inflicted pain on him; he said ‘Father forgive them for they do not know what they are doing’”, she reflected.
Despite all of the suffering she was forced to endure at the hands of her captors, Rebecca has learned to forgive, pointing to the mercy of Christ as a model. (M.L.)