Within the priceless cultural heritage that is preserved among the Indian peoples of Mexico and includes such important areas as language, rites and world views, pride of place goes to the production of textiles. Textile traditions characteristically reflect extraordinary cultural diversity. A journey among the indigenous peoples of some regions to learn about their rich textile culture.

Chiapas is one of the states of the Mexican republic that has the highest percentage of indigenous people. Tzeltals, Tzotzils and Tojolabals speak languages of the Maya family. Among the Maya of the Highlands, clothing is still an element of cultural identification. In the different villages, items of clothing are produced that have particular characteristics – mainly in the matter of colour and design – which enable those who wear them to show they are different from other members of the same ethnic group. The validity of the original meaning of the characteristics of the cloth which functions as an identifying sign, has led to the preservation of ancestral techniques among the weavers of the Maya of the Highlands in the manufacture of cloth itself as well as in decorative motifs and last but not least, in their meaning. This does not mean that the weaving tradition of this region was not transformed by the conquest, since the coming of the Spaniards brought with it some raw material such as wool, more suitable to the climatic conditions. Today, in a large number of localities, traditional clothes are produced such as huipiles, belts and capes, as well as other items of western origin such as blouses and shawls and articles like tablecloths, carpets and satchels. 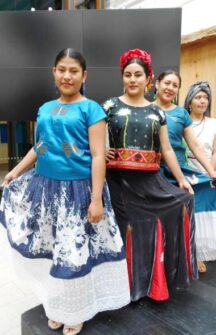 A good proportion of products are woven using the strap loom, with various embroidered or brocaded motifs. Cotton thread is usually used though some areas are distinguished by their use of wool. An important characteristic of the textiles of this region is the sort of decoration used which derives from a view of the world and its inhabitants which frequently predates the Spanish epoch. Among the elements that are found in the textiles of the Highland Mayas are: diamonds, toads, fields of grain and flowers, especially bromeliads. Other motifs represent the sky and the Sun, whose symbol is the butterfly, corn and cornfields.

Oaxaca. Great variety.
No other region possesses the ethnic riches that characterise Oaxaca. In this harsh and diversified territory – which also includes parts of Guerrero as well as the actual state of Oaxaca – there live the Amuzgos, Chatinos, Chinantecs, Cuicatecs, Huaves, Mazatecs, Mixes, Mix-Tecs, Tecuates, Tlapanecs, Triques and the Zapotecs. This richness gives rise to a vast array of cultural expressions, including the textile tradition. Among the characteristics that render the textile production in the Oaxaca region one of the best known in Mexico is its great variety: every region has its distinct attributes and it is believed that there are 300 different items of clothing woven in cotton, wool or silk. 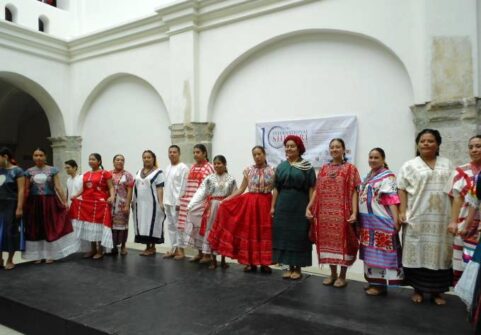 Women’s clothing usually consists of a huipile (a straight, sleeveless shirt), which may vary in length: down below the knee among the Zapotecs and the Mistis of the northern uplands and some Mixtecos; above the knee among the Mazateks and the Chinantecs and also to be found among the Zapotecs of the isthmus. The clothing is completed by a skirt wound round the body from the waist down, of different lengths; the Tehuan women wear long, broad skirts.
Another characteristic element is the unchanging method of production that goes back to pre-Hispanic times. 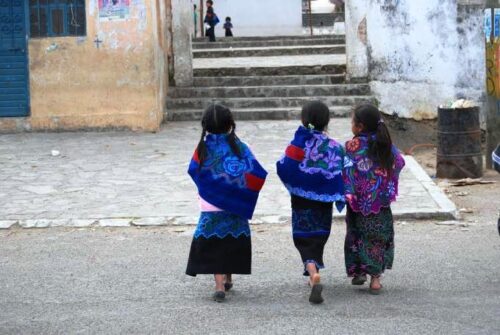 There are many communities where materials are woven on a backstrap loom and in some of them the spinning wheel is still used to make thread. There are communities in which natural dyes – made from cochineals, indigo and the purpura snail – are still used to colour cloth. In general, the textiles of these regions are decorated splendidly with embroidery showing various motifs, of which some are clearly pre-Hispanic and connected with the indigenous world view.

Nahuas. Trending towards urban dress
This is the largest indigenous group in Mexico: there are almost a million and a half Nahuas-speaking people scattered in various regions. Even though these groups have their language as a common characteristic, it is true to say that their specific cultural expressions vary considerably, based mainly on their post-conquest history.
While the Nahuas in regions such as Mexico City are identified only by their language and some social customs, those in more remote regions, such as Guerrero and Puebla, have preserved a broader array of indigenous cultural elements. 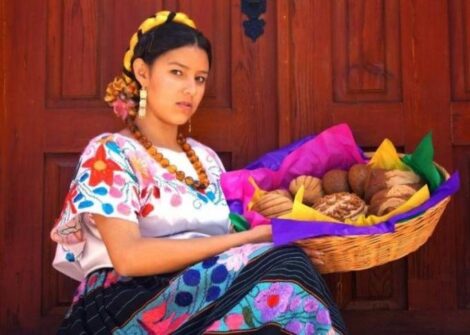 One of these is the production of textiles. The proximity of many Nahua towns to the large cities caused them to adopt the clothes (shirt and trousers) that the Catholic missionaries considered more modest than the old male loincloth. Today, the Nahuas wear factory-made clothes like all city dwellers. Only in remote places do they wear, with variations, colonial dress. Women’s pre-Hispanic dress was more within the missionary rules and this is why it was perpetuated with fewer changes: a loose skirt, gathered in at the waist, covers the lower part of the body. Above it they also wear a rather long huipile or a cape (quechquémitl). Since the women would often remove their huipile or quechquémitl at home, from colonial times, long or short-sleeved blouses were adopted which had elaborate embroidery around the neck. Nahua women demonstrate their art and manual ability by making these items of clothing. In Nahua localities where textiles are produced, it is not uncommon to find belt looms and techniques such as gauze, brocade and curved weaving. In some places, the threads are coloured with natural dyes such as indigo and red cochineals. The motifs that decorate these products are varied and reflect a view of the world, the environment and, in a certain way, the cultural transformations of the Nahua groups. They include geometric elements such as circles and rhombi, stars and suns, images of the sky, the wind and streams, maize and corn plants, animals such as serpents, jaguars and birds,
to name but a few.(P.S.)