The Ticuna indigenous ethnic group is one of the most numerous in the ‘Amazonian Trapezium’ which includes the triple border of Colombia, Peru and Brazil.

The Pelazón ritual, which marks the transition from childhood to adulthood of a girl, is part of the cultural ceremonies of the Amazon community of the Ticuna people. Although some communities of this group do not perform it anymore, it has remained important to many other Ticuna people who are spread throughout the Amazonian Trapezium, as they are one of the most numerous ethnic groups in the Amazon.The Pelazón is a ritual that keeps tradition alive and that, over time, has been adapted to modern times and the new realities that the Ticuna indigenous people have experienced in the past, and are experiencing today. 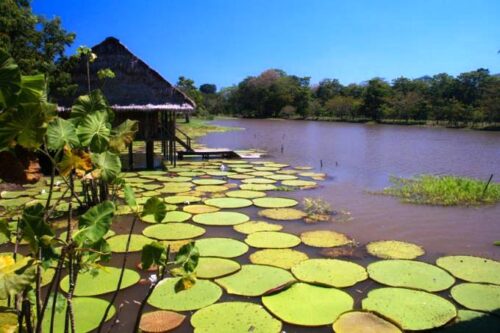 When a girl has her first menstrual cycle, she is aware that she is going through an important stage of her life. In fact, she has been prepared to this event by her mother since she was very young. Following her first menstruation, each young Tikuna girl who has chosen to take part in the ritual and Pelazón ceremony to mark her transition from childhood to adulthood, will isolate herself in a small house made of palm leaves; nowadays she may stay in an isolated part of her own house. No one (other than her mother and a paternal aunt whose job is to educate her) is allowed to visit the girl. She is taught about her future responsibilities as an adult member of the tribe, and especially as a future mother. During her isolation the girl is supposed to follow a special diet. This experience is considered as a new beginning, a time for purification. Contacts with people other than her mother and her aunt would be considered as an interruption of the girl’s development process. The girl must also protect herself from the spirits of the jungle (called ngo-ogü), which try to contact her. 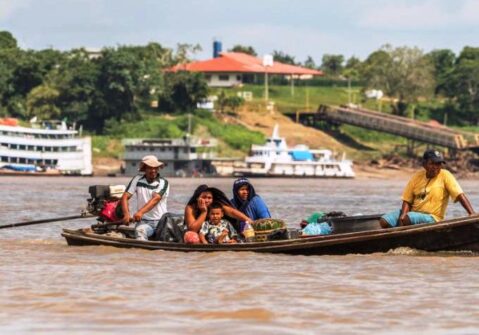 The girl may remain confined from one to six months, depending on the time her family needs to get enough meat and masato (an alcoholic beverage produced from cassava) for the guests who will attend the Pelazón ceremony. Meanwhile, some community members prepare the black dye obtained from the fruit of the ‘huito’ tree (Genipa americana). This is a natural pigment used to paint the entire body of the girl as a symbol of protection. When everything is ready, the celebrations begin and the girl can be welcomed back into the tribe as a woman. Some women paint her body with the black dye. When the girl comes out of the room where she was confined, she wears a crown that is initially used to cover her eyes preventing her from seeing and she wears a dress mainly made of beautiful feathers of macaw, the common parrot, and white heron which are inserted in a yanchama cloth, which is dyed with vegetable dyes of annatto red and yellow saffron.
The women attending the ceremony offer food to the participants. Then, some dancers wearing masks, chamu’, arrive and start to dance to the flute music and the beating of the drums. 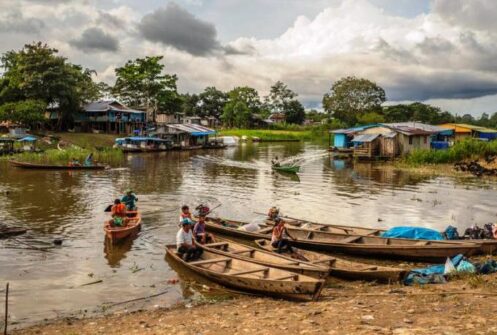 The making of the masks is completely secret, no one but the person who makes them knows what they represent since he gets inspiration from dreams. He is the only one who decides the design and the colour of the masks. In some cases they represent the girl’s clan; other times beings of the earth, water, jungle or natural phenomena such as rain, lightning, wind, or the sun and the moon; other times they represent ants or worms, or other insects.
On the ceremony day, at the end of the afternoon, the girl’s hair is removed (hence the Spanish name ‘Pelazón’ for this ritual). Formerly, they would actually pull out the hair by hand, but currently the process is often less painful and scissors are sometimes used. This also to make the ritual more acceptable to the eyes of non-indigenous people who may consider pulling hair out by hand a rather wild practice. 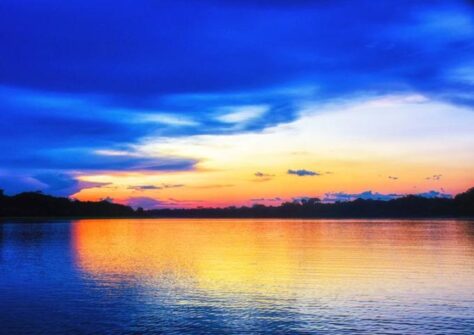 While the ceremony begins with the Ticuna girl leaving isolation, it ends with the girl being carried to a lake or river. Here her mother washes her, the other participants also bathe and this marks the end of the ritual, while the party goes on with constant music, singing, dancing and drinking masato until dawn. (Open photo: People on the boat from Ticuna people – 123mn/123rf.com)