Syria and Iraq. The central role of the Russia in the region. The possible new nuclear deal. A peace solution in Yemen. The intensification of the street protests.

President Bashar al Assad has won the war in Syria; he and the Ba’ath party shall remain in power and the West’s drive for regime change have failed. The Government in Damascus has managed to take back the majority of the territory, even if the Kurds still control the large area that extends from Manbij to Al-Qaim. Even in that case, thanks to Trump’s decision to pull out, Syrian forces have resumed a dialogue with the Kurds, who appear to be heading back into Damascus’s influence.
This will be one of the key developments in 2020, but just how quickly and smoothly it unveils depends on what the Americans choose to do – and how the Turks might respond.The Trump White House has grown tired of its wars in the Middle East – and Trump shows little interest
in foreign affairs. 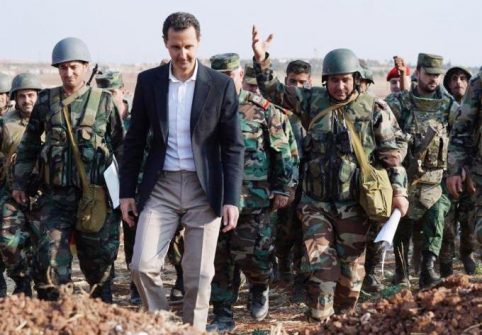 The U.S. president seems ready to stop supporting the Kurds of the so-called Syrian Democratic Forces (SDF), thus it can be said that Trump has contributed to the process of Syrian reconciliation that will likely intensify in 2020. Concurrently, the Syrian war has slammed open the door for Russia’s return to the region. Moscow has regained a central role in the Middle East, through its involvement in Syria. Russia will maintain the naval base at Tartous in the Mediterranean and it has also shown its ability to act as a referee – a much better one than Washington. Putin has managed to protect the Assad presidency, not only militarily, but also by being able to address the concerns of Syria’s rival Israel, negotiating to have Hezbollah and Iranian special forces – far from the Israeli border. Moscow may face a challenge in balancing Iranian needs in 2020 but Iran itself has become dependent on Russian support to allow bilateral relations to suffer; especially, as both Rohani and Putin are fully aware of the different goals they are pursuing in,
and through, Syria.

Israel, Iran, Iraq…
As far as Israel is concerned, whether Benny Gantz could succeed in forming a new government by the start of 2020, but his Blue and White Party does not have a sufficient majority in the Knesset to prevent a third election, which could take in the early months of 2020. Regardless, whether Gantz or Netanyahu, Israel’s strategic approach will not change, and it will continue to hit Hezbollah and Iranian forces in Lebanon and Syria with little opposition from Russia. Israel could take advantage of the intensifying chaos in Iraq to pursue more attacks against Iran’s allied militias there as well.
With Syria returning to some kind of normalcy, Iraq could become a more frequent target of Israeli raids – and not least because there are emerging, if ambiguous ties, between Baghdad and Tel Aviv. 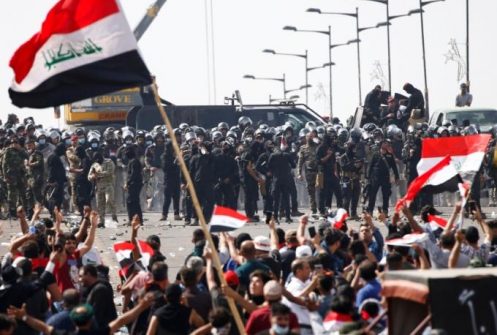 Last November, Prime Minister Adel Abdul-Mahdi, resigned after weeks of violent anti-government protests that have rocked the country. The American presence remains intrusive and the presence of U.S. troops may well intensify in 2020 as Washington looks for ways to maintain a presence in the in its effort to contain Iranian influence, even if, Iran and Iraq signed an agreement toward establishing more and freer bilateral trade, contrasting with American sanctions imposed against Tehran. In 2020, the trade relationship is expected to expand in volume and value, according to the agreements signed in 2019.
The Israeli strikes in Iran could not have occurred without Iraqi and American knowledge and acquiescence and they prove that Israel’s main regional priority will continue to be the elimination of pro-Iranian Shiite militias wherever they might be. The fear, now more than before, given Bashar al-Asad’s endurance in Syria – is that Iran could find a way to consolidate its Shiite crescent from the Caspian Sea to the Mediterranean. This strategy includes the obstruction of Iran’s missiles and its nuclear program – though Iran denies this, stressing it is pursuing civilian nuclear technology only. 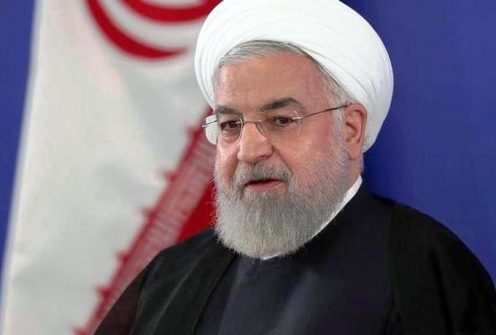 In this scenario, Trump, who appears determined to abandon Middle East Wars, might refocus his attentions to renegotiating a new ‘nuclear deal‘ with Iran. Trump would use such a deeal to boost his electoral chances, perhaps reserving its formalization as an ‘October Surprise’, to be announced in the weeks before the U.S. presidential election in November 2020. Russia and Syria’s ‘victory’ in the War has made such a deal necessary, if Trump wants to leave the Middle East and do so, offering assurances to Washington’s allies/clients. A new ‘nuclear deal’ and the inevitable improvement in relations between Iran and the West would strengthen Iranian pragmatists at the expense of the more ideological figures, who have driven the pursuit of regional hegemony, known as the “Shia Crescent”. Such a Deal, moreover, would allow Moscow – which has maintained close and friendly ties with Syria’s and Iran’s enemies in the Middle East, from Israel to Saudi Arabia and the United Arab Emirates – to help weave Damascus’s position back into the fore of inter-Arab and international diplomacy. 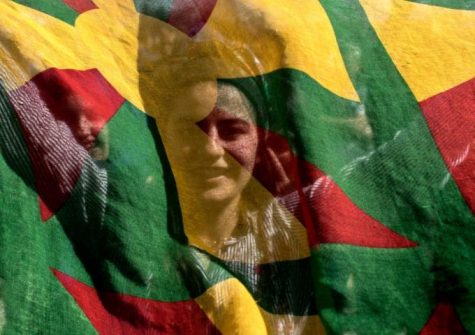 There have already been rumors of improving ties in response to Turkey’s military operation against the Kurds. In late 2018, the UAE reopened its embassy in Damascus and Syria can expect to be re-admitted to the Arab League in 2020. Even Hamas, which broke ties with Damascus in the wake of the War, appears ready for reconciliation (Source: al-Monitor). The fact that the Saudis have shown interest in acquiring the Russian S-400 missile defense system, during President Putin’s visit to Riyadh in summer 2019, suggests that Moscow is in a position to ease Syria’s re-entry into the good books of the Gulf States’ – America’s closest Arab allies – in 2020.

Yemen
In this conciliatory context, which forces the United States to come to terms with the fact that Russia’s superpower ambitions are on the ascendant, a solution involving compromise between the Houthi forces and the Saudi-UAE-US backed Yemeni government led by President Abed Rabbo Mansour Hadi, reviving the Stockholm talks that started in 2018. 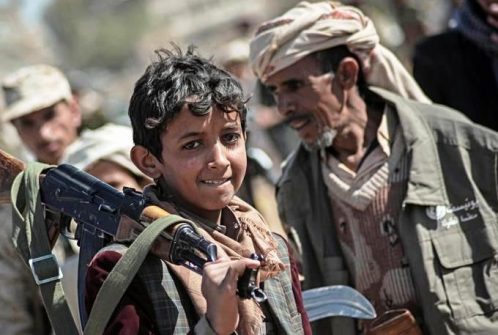 Crown Prince Mohammed bin Salman of Saudi Arabia, the Kingdom’s de-facto ruler; especially, as far as foreign affairs are concerned, expressed hopes for a political solution to the five-year long conflict. A renewed thaw in relations between the United States and Iran, with Russia as ‘guarantor’ could move diplomacy in such a direction in 2020.

The Arab Spring. The Real One?
In 2019, there have been protests in Iraq, Sudan, Algeria, Jordan, Lebanon and Egypt . The latest episodes in Iraq and Lebanon suggest that whatever phenomenon occurred eight years ago – flawed, and not necessarily democratic in nature by any means – suggest that the Middle East and the Arab world in general are experiencing a transformation, even if it is unclear what shape it will take. The West has corrupted the Arab Spring in most cases (especially Libya and Syria), ‘artificially’ allowing rebels to gain the upper hand, in many cases resulting in the erosion of the secular rule and secular values, advanced by the Arab republics and dictatorships mirroring the Nasserist and Baathist models.
While Sudan and Algeria have seen intense and prolonged protests – though, it should be noted that Algeria was the first Arab country to experience a ‘democratic’ impulse in the period from 1989-1992) – the scope of this article is to focus on the Middle East proper. Even there, protests in Lebanon and Iraq, the most intense, have also been prolonged. And there are few signs that solutions are forthcoming. The protesters have rejected all of their respective governments’ offers. In other words, the differences between the rulers and subjects remains as deep as ever. Interestingly, Iraq and Lebanon both have Shiite majorities and are ostensible ‘democracies’. By comparison, the Kingdoms – ever more Constitutional in nature – of Morocco and Jordan have fared better. Neither of those two Kingdoms has experienced the intense foreign exploitation of internal ethnic and confessional differences that have characterized Iraq and Lebanon since their (flawed) creation from the ashes of the Ottoman Empire. 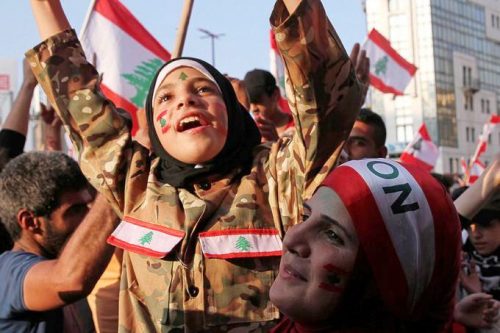 If there is some hope for deeper change, it is that the current protest movements cannot even be suspected of being radical Islamic ones. They reach across the various socio-cultural strata, hinting that their complaints have deep roots. The firebrand leaders of the Shiite communities of Lebanon and Iraq, Hassan Nasrallah and Moqtada al-Sadr have encouraged the protests against governments, featuring significant Shiite political influences. Perhaps, in Iraq, where post-Saddam political dialogue has mainly occurred within the Shiite community, there may exist a more religious character to the mobilization in some cases. In Lebanon, rather, as L’Orient le Jour writes, the wave of protests appears to have re-discovered the unity between various segments of the Lebanese population, fractured deeply since the 1975-1990 civil war.
Similarly, in Egypt, massive demonstrations against the Government of President al-Sisi (the first since the coup of July 2013) have not involved the Muslim Brotherhood, or other Islamists. The protesters, mostly young men, did not even challenge the legality of al-Sisi’s rule. They are talking to the streets to express their economic frustrations, the absence of job prospects and the anger against the vexations of the security apparatus. These grievances are not new. They have long existed in Egypt – and typically, government austerity measures and lifting of subsidies of basic food items, has always triggered riots. But, the Muslim Brotherhood was able to exploit and manipulate the anger, channeling it into often excessive religious piety. This has not happened now.
And for this very reason, the current movements should raise even more concerns than the 2011 protests, which have, with the exception of Tunisia, left the status-quo intact. What started to happen in 2019, and which will continue in 2020, might well be the real ‘Arab Spring’.
Alessandro Bruno