It took almost four decades for the people of Nigeria to rediscover one of three lost original copies of this picture of Princess ‘Tutu’ painted by artist Ben Enwonwu in 1974. The painting which had become part of Nigerian history was found in a flat in London and sold at auction last month for more than a million pounds.

It was lost for almost forty years, a portrait of Princess Ife Adetutu Ademiluyi, known as ‘Tutu’, by modernist Nigerian artist Ben Enwonwu, and was found in a modest apartment in an area to the north of London towards the end of 2017 and sold at Bonhams auction house for 1.2 million pounds. 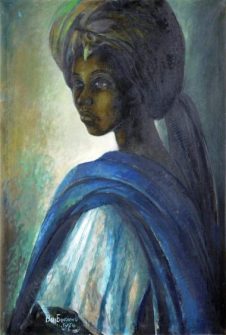 The fruit of a love-story, this painting was the symbol of reconciliation after the Biafra war (that ended in 1970), becoming something of a legend due to its disappearance and the extraordinary story of how it was rediscovered.
The Booker prize-winning novelist Ben Okri said, “It has been a legendary painting for 40 years. Ben Enwonwu wasn’t just painting the girl, he was painting the whole tradition. It’s a symbol of hope and regeneration to Nigeria, it’s a symbol of the phoenix rising”.

The painting as his masterpiece

The work came about after the painter fell in love with the princess whom he saw for the first time in 1970 in the city of Ife, the cradle of the Yoruba tribe in south west Nigeria where he was professor of art at the University. Struck by her long neck and her graceful beauty, the artist spent six months trying to trace her and trying to convince her family to give her to him in marriage, something rarely permitted for a high ranking woman. In fact, Adetutu Ademiluyi is the niece of a great traditional chief, the Ooni (King) of Ife, Ademiluyi, who died in 1930. 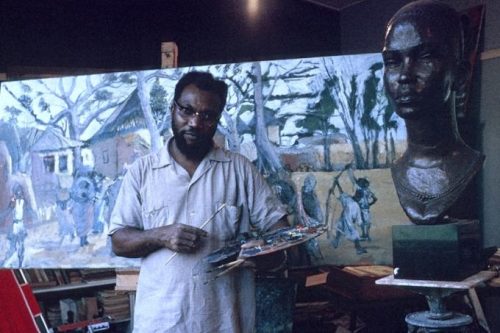 In 1973, Enwonwu painted a portrait of a far-seeing woman with a violet turban and a halo of light in the background just under her chin.
It is an image of mystery that is often compared to the Mona Lisa by Leonardo Da Vinci.Enwonwu considered the painting as his masterpiece, capturing the spirit of the emancipation of women and negritude, of which he was a fervent supporter.
“He was convinced that she personified what he wanted to express about Africa”, said the son of the artist, Oliver Enwonwu. 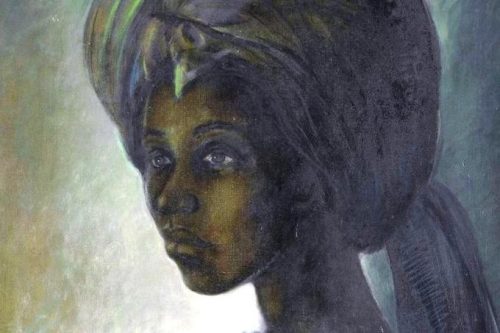 According to his account, his father was very reluctant to sell the painting and, in 1974, produced two more versions/copies of the work, to avoid losing the first one which he kept in his home.  The second version, found in London, disappeared after an exposition in Lagos, in 1975. All trace of the third was lost after it was sold, while the first was stolen from the home of the artist in 1994, shortly before he died.

Princess Adetutu Ademiluyi also disappeared and was never found and it is not known if she is still alive. “To have found one of the trilogy of painting that disappeared is already, in itself, important for the world of art and for the Nigerian national identity, but if ‘Tutu’ were also found, it would be the icing on the cake”, said Giles Peppiatt, director of the department of African modern art at Bonham’s auction house. 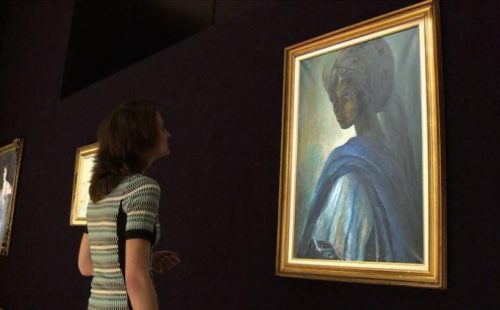 It would not be easy to trace her. The king of Ife had 37 wives and hundreds of children and grandchildren, so there would be many princesses fitting the description of ‘Tutu’ and to find her in a city of 21 million inhabitants like Lagos is almost impossible.

Enwonwu, the painter of negritude

Far from the traditional African stylistic rules, Ben Enwonwu studied at Oxford in the forties where he was influenced by European art. This is why he is considered one of the fathers of African modernism. He was a convinced Pan Africanist and was within the political and literary thinking connected to anti-colonialism and the negritude of Aimé Césaire and Léopold Sédar Senghor, whom he met in the fifties. In his works, he wanted to show the beauty of an independent Africa that proudly affirmed the qualities of the black race.