Despite having lost both legs in a bomb explosion, Sr. Present returns to her mission. A gesture of love and hope.

The memory of what happened is still very much present not only in her mind but also in her body. A bomb blew off both her legs. Sr. María Presentación López of the Congregation of San Josè de Gerona is moved as she remembers: “It was 28 October 2008, at our mission in Rubare in the east of the Democratic Republic of Congo where the rebels led by General Laurent Nkunda clashed with the regular army. For some hours the mission had been caught in crossfire and then the hall where I was sheltering took a direct hit. I remembered nothing more. When I came to, I saw blood all around me and lots of smoke”. Sr. Presentatión,  called Sr. Present, had no idea of what had happened. She just felt a lot of pain and was unable to move. Fortunately she had her cellphone. “The first person I called was Sansón, a Congolese friend of ours. He told me not to move as there were many soldiers and rebels about. I told him I was wounded and he asked if I could ride as a passenger on his motorcycle. I can’t remember my answer”. Risking his life, Sansón tried twice to reach the mission. Then Sr. Present called Father George, the parish priest but he too was prevented from reaching the mission. 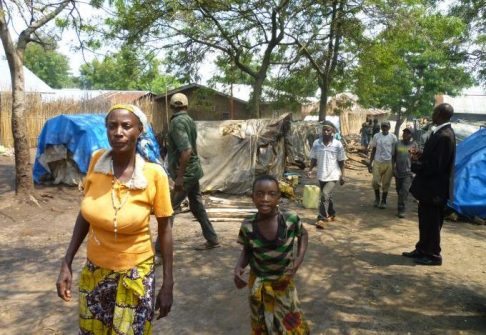 The hours went by and Sr. Present lost a lot of blood. Then, through hazy eyes she could see two figures approaching. The two Congolese soldiers understood immediately what had happened. Sr. Present was barely able to speak and asked the soldiers to look for the Sisters, probably sheltering in the garden. Immediately one of the soldiers went and shortly afterwards returned with a Sister. Together they carried her to the little mission clinic.
Sr. Urbana, one of her colleagues knew the situation was critical as Sr. Present was going into a coma. Despite the danger, she decided to take the wounded Sister to Rutshuru hospital eight kilometres away. 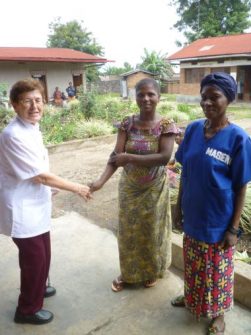 The road was filled with fleeing people and soldiers. At last she reached the hospital. There she fortunately found a Spanish doctor who had been prevented from travelling because of the shooting. He immediately assisted Sr. Present but indicated she had to be taken to a properly equipped hospital to be operated on, something impossible at Rutshuru. Sr. Urbana didn’t think twice and, ignoring the danger, travelled the seventy kilometres from Rutshuru to Goma and the headquarters there of the United Nations. The person in charge stated that they were not allowed to evacuate wounded civilians and it was only after the intervention of the Spanish ambassador that Sr. Present was evacuated directly to South Africa where both her legs were amputated. After a few months she returned to Spain.

It took months of rehabilitation. With the help of two artificial legs and crutches, she at last began to walk again. But her mind and her heart were still at Rubare mission and she was continually in contact, even from home, seeking the help of people and organisations promoting projects in the Democratic Republic of Congo.
“I never forgot to pray for the people of Rubare. They were always in my thoughts. However, it seemed I would never go back there. That seemed impossible in my condition”, Sr. Present admitted. Miraculously, her superiors suggested she return to Rubare. They had understood how this Sister still had a lot to give. She had left part of herself there. Most of all her heart. “When I was informed, I could not believe it. It was like a gift straight from heaven”, she says happily. 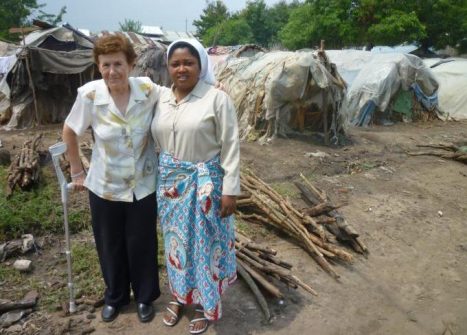 On her return she again met Sr. Urbana, the colleague who had kept her alive and Sr. Present saw the old house damaged by the bombs and now rebuilt. Ten years is a long time in the missions and now there was an almost completely new community of African Sisters from DR Congo and Rwanda. The return of Sr. Present created excitement among the people. On her first day, she went to the dispensary at Rubare, her old place of work at the mission. Nobody had forgotten her and all was joy. The Parish priest of Rutshuru spoke while visiting one of the chapels of how, during the war, a short time before the ‘accident’, everyone fled. The only people who remained, ignoring the danger, were the Sisters and they were foreigners. “How could we leave the sick and the wounded who had no one else to care for them? Despite the risk involved, we knew we had to stay”, Sr. Present said, in the words of the priest. 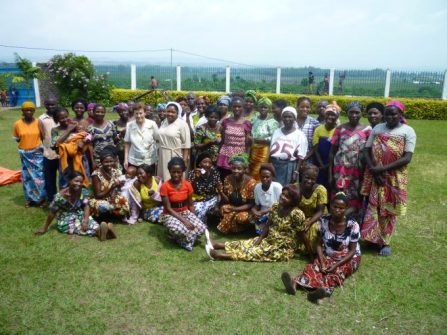 After ten years many things had changed but, for Sr. Present, her return meant going back to the place she had known and lived in. There is still much fear and insecurity. It is not possible to travel between 6pm and 6am. There are still the armed militias and bandits, who attack people. There are army road blocks on the main roads with their inevitable Kalashnikovs at the ready. A road block is an ideal place to extort money from those passing through. Officially, the war is over but the violence continues in the whole of the region.Around Rubare things seem the same but the mission itself has continued to grow and develop. The little clinic has become a regional referral hospital. It has a laboratory, a blood bank, a pharmacy and a large maternity block. The Director is Sr. Francoise, a Congolese, assisted by Sr. Urbana and Elena, an expert theatre nurse. Furthermore, the Sisters continue to help with women’s development and many parish activities. 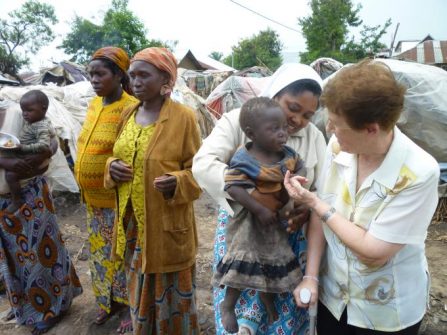 Seeing the children, Sr. Present said: “I always wanted to do something for the smaller children. The opportunity came when, after my accident, I received many calls from people offering to help in the DRC in some way”. Due to the efforts of some friends, a kindergarten was built for children from three to six years old, with the basic aim, apart from lessons, to combat malnutrition among children. Then a primary school was built under the direction of three Congolese Sisters, Sr. Dativa, Sr. Georgette and Sr. Clemence who, with the help of various teachers, see to the correct functioning of the entire complex. To keep the school going, a Development centre was started which produces bread, soap and sugar for sale. There is also a small but well organised farm producing milk, meat and eggs for consumption and for sale. The Centre provides almost permanent employment to around forty workers.
The seven women missionary Sisters present today in Rubare are going ahead with their work, convinced that what first seemed to be the end of their presence in Rubare – the destruction of the community and the attack on the lives of its members – has become the beginning of a new journey, a new phase, perhaps no less difficult but completely open to the horizons of hope.