In the Mesopotamian swamps, people live in symbiosis with five-thousand-year-old waters. This treasure of biodiversity is in danger: “We are in the middle of a water emergency”, says activist Ali Alkarkhi.

At Chibayish, 400 km south of the Iraqi capital Baghdad, the water that finds its way into the cane fields is dotted with mashufs, the streamlined canoes that are the perfect means of transport in this place.
In the swamps people fish, hunt for birds and ducks, cultivate rice, and raise animals. It is a paradise of biodiversity that is home to rare species like the sacred ibis and a resting place for the flocks of birds migrating between Siberia and Africa. It is no accident that, according to tradition, the Ahwar of Iraq, about eight thousand square kilometres of marshlands in the heart of Mesopotamia where the Tigris and Euphrates flow and bring life before throwing themselves into the Shatt al-’Arab river, is what the Bible calls the Garden of Eden. 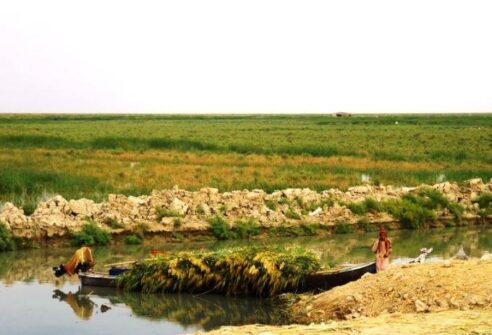 In 2016, UNESCO designated the area, together with the archaeological ruins of the Mesopotamian cities of Ur, Eridu and Uruk, as world heritage sites. “But this unique ecosystem, where, for five thousand years, the Madans have lived in symbiosis with the natural elements, is now in danger”. Ali Alkarkhi, a young activist and founder of the Humat Dijlah (‘Protectors of the Tigris’), has again re-launched the alarm sounded by the international organisations according to which the growing shortage of water represents a most serious threat to this exceptional habitat and the 130,000 people who still live there.
“The so-called ‘Marsh Arabs’ are the first autochthonous community of the region and they have preserved in time an economic-social system based on an abundance of hydric resources”, explains Alkarkhi. “The fine balance was upset in the time of Saddam Hussein who, in 1991, ordered the draining of the wetlands as a reaction against the inhabitants accused of offering refuge to rebel combatants: more than a hundred thousand people were forced to emigrate”.
In 2003, after the fall of the regime, the transitional government made great efforts to restore life to the area, removing the dams and canals that had been built along the courses of the rivers. However, on the one hand the ecosystem requires a long time to recover and, furthermore, those people who, decades ago, moved to the cities today often prefer not to return to a precarious existence where services are few and the new generations cannot foresee any professional prospects. At the same time, other serious threats are bearing down upon the Ahwar. 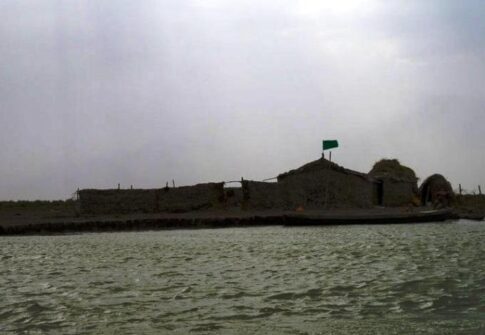 Mosque and Mudhif, the traditional house of Marsh arabs aka madan in Iraq. ©homophoticus/123RF.COM

“In recent years, the bordering countries have built some large dams on the waterways that flow to their countries before reaching Iraq: examples of this are the Illisu dam built by Turkey on the Tigris, and that of Iran on the Sirwan, which have seriously impacted the flow of the two rivers”, Ali explains. “The Iraqi governments, on their part, have never promoted adequate hydric policies and the local administrations are inefficient while the population continues to use unsustainable methods of irrigation. The scenario is aggravated by global warming which brings increasingly frequent droughts and increasing salinization of the soil”.
The UN classifies Iraq as the fifth country in the world in vulnerability to climate change. The local communities, one of which is the Madei people, followers of a most ancient gnostic faith whose traditional rites are closely linked to an abundance of water, fight daily to retain their territory. “Here the lifestyle depends totally on the marshes”, recounts the young activist. “The local economy revolves around raising a local species of buffalo which provides them with meat and milk that is used to produce guemar cheese. They use the horns and the skins and even the excrement is used as fuel for the kitchen. These animals, that represent the currency of Ahwar, do not survive without a sufficient supply of water”. The Madans live on the water. Their customary houses are called mudhifs, spacious houses of cleverly woven reeds standing on tiny islands surrounded by the swamps.
“They must use boats to travel anywhere; canoes are used to go to the market, to school or to the doctor. There are no roads by which cars can reach these centres and when there is a drought, the communities are cut off for months on end. Our fear is that, with climate change, the emergency will become the norm”. 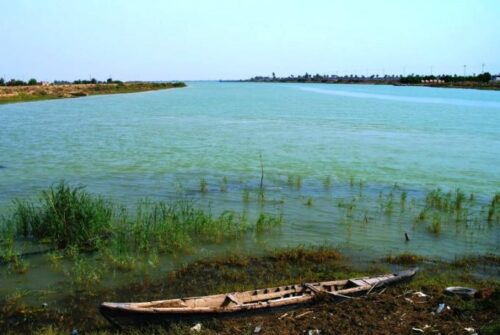 Shatt is an arab landscape with grass nature. ©homophoticus/123RF.COM

This is the reason why the activists of Humat Dijlah who operate in sixteen Iraqi cities and involve four hundred volunteers actively promoting environmental awareness at the grassroots level, have decided to launch some specific programmes for the region of the swamps. “We work on different levels”, explains Alkarkhi. “On the one hand, we support the application of the law instituted a few years ago by the environmental police and that of the rivers to monitor harmful practices such as hunting and intensive fishing or the use of methods harmful to the ecosystem, but also illegal draining for agricultural purposes. Parallel to this, we train communities to monitor the environment and to document violations by means of photos and video taken with cellphones, as well as urging them to pass from traditional irrigation by submersion to that of drip irrigation. Then we have our lobbying work aimed at the local administration concerning the management of water resources and the treatment of sewage which today goes directly into the swamps”.
In a country where 70% of industrial waste is dumped into the rivers or the sea, wastewater dumped into the marshes causes pollution and the concentration of heavy metals which, through the flora and fauna, also threaten the inhabitants. This does not take into account the deterioration of the environment – with the miasmas that infest the air along the banks where picnicking families roast the fish they have just caught – representing one of the factors that discourages the return of local tourists: a crucial challenge to guaranteeing a future for this corner of the Fertile Crescent. 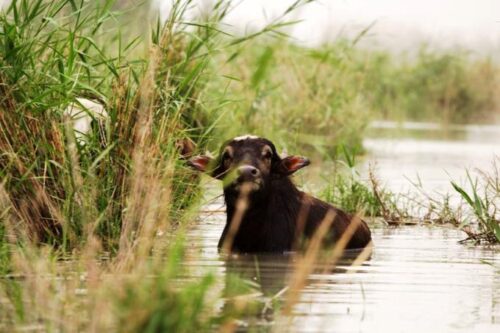 Marshes of Iraq in Dhi Qar province, which is located south of Iraq, show where water bodies and Cane papyrus, and Animal of buffalo. Rasoulali/123RF.COM

“The Governorship of Dui War aims at promoting economic growth while preserving the cultural heritage, offering especially young people and women the opportunity of training for work in the eco-tourism sector. By means of small cooperatives, we see the creation of an ecological village at Chibayish, a factory for traditional boats, craft, and souvenir shops. Artistic and cultural events are also planned.
“It is our hope that the influx of visitors generates income for the residents, making them ever more independent of external aid”, explains Raed Mikhael, activist of Humat Dijlah.
Side by side with the local initiatives, the efforts of the central government are still fundamental. “During recent decades, tormented by wars and terrorism, the protection of the environment and the management of water resources has always been at the bottom of the agenda of succeeding administrations while today it should be given top priority”, affirms Ali Alkarkhi. “Above all, the Iraqi government must commit itself to serious negotiations with bordering countries to reaffirm the right to water of all the inhabitants of the area. It is not just a national but a regional question: even though it covers four different countries, Mesopotamia represents a unique entity from the point of view of ecology: we can only overcome the water emergency by working all together”. (Open photo: Mesopotamian Marshes, habitat of Marsh Arabs aka Madans, Iraq. ©homophoticus/123RF.COM)