Hundreds of street children roam the centre of Harare, the capital of Zimbabwe, living in subhuman conditions. Many of them are second generation victims: their poverty is a consequence of their orphanhood. Their parents died from HIV and now they are all alone without family, living on the street and, in some cases,
in a foreign country.

Samora Machel Avenue, so named in honour of the father of Mozambique’s independence, crosses the centre of Harare from east to west. Luxurious hotels, some colonial houses surrounded by high office buildings, traffic jams, bustle of the streets … the typical urban landscape of any African capital.Fuel shortages cause long lines of cars waiting for refuelling, especially during peak times in the late afternoon. Some drivers take advantage of the wait to buy shoes from a street vendor or have someone wash the car by hand in five minutes. The wide areas of the Total gas stations become improvised markets, which are widely spread throughout the continent. 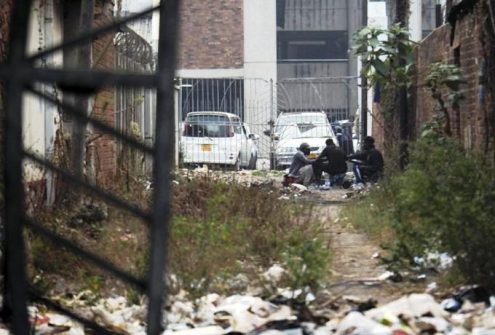 “The street kids know it and take advantage of that”, says Marvelous, who is 35.  He works at a gas station in Harare and explains to us:  “When they stop at a red light, drivers must watch carefully ahead and behind their car, if they get distracted, in few seconds they’ll be surrounded by children. Most of them ask for alms, but there are also those who try to steal anything they may find inside a vehicle.

The zvigunduru
Many of the unemployed youth in Harare have turned to drugs and they are often referred to as zvigunduru, which in Tsonga, the local language of Zimbabwe, means ‘sleepers’, as they spend most of their time sleeping or lying down after consuming drugs. One can see the zvigunduru lying down mainly in the alleys where there are hotels, gas stations, and banks. The area around the Number One hotel is one of their favourite places. It’s better not to get lost inside that area, which is in fact the street children’s territory, where laws are dictated by those who have nothing to lose. 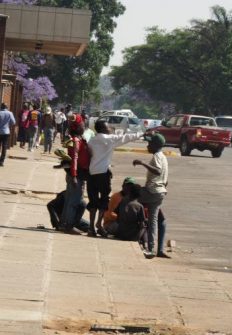 Marvelous knows almost all those kids by their first name. “Look, that kid’s name is John. He is a good kid and does not take drugs”, he says pointing at a kid wearing a shabby white shirt and a worn out pair of trousers. By drugs, Marvelous refers to toriro, the local drug that causes aggressive behaviours, since the effects of cocaine are potentiated by mixing it with bicarbonate. John says he is 10, but he looks a little bit older; he does not speak much since he distrusts white men and journalists alike. “What I want to do is to go to school”, he keeps on saying. He tells us that his mother, who is from the city of Gweru, in the centre of the country, married an immigrant from Malawi, who abandoned her soon after he was born. “I grew up with my maternal grandparents, but there was not enough food for everyone and so I decided to come to Harare hoping to have a better life”. 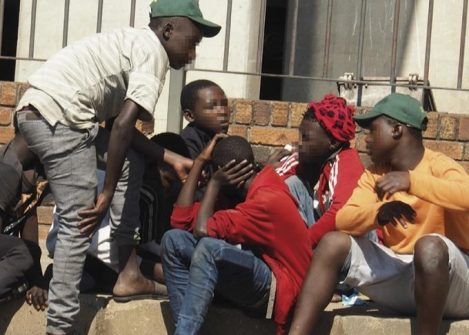 John tells us that he survives thanks to the coins he gets from drivers and that he and another dozen young people spend the night in the alleys of this area. “I’m not afraid because Mad is with me”, says John, pointing at a boy standing a few metres from us.
At dawn, the older children leave the alley and reach the avenue where they beg for money or food. Then, at mid-morning they come back bringing bread, tetrabriks of juice and a bottle of maheu, the maize-based local drink. They are soon surrounded by all the other children and all of them eat greedily because they know that that may be the only decent meal of the whole day. But, when kids can’t get any food or money from people, then one can see them searching for food in the garbage bins outside the numerous Spar supermarkets of the area despite the security staff trying to keep them away because customers are frightened by them.

The victims of the epidemic.
Not far from the alleys in the Number One hotel area, is the colonial style Catholic cathedral of Harare and on the other side of the Fourth Street stands one of the most prestigious mission complexes in Zimbabwe. It includes the school of the Dominican Sisters, which is attended by more than 1,000 schoolchildren, and the main house of the order in Zimbabwe. Sister Angela is a nurse. She was born in Germany and has been living in the African country for 56 years. “There are more and more kids living in the streets of the city centre”, she tells us in the shadow of a jacaranda in the beautiful garden of the school. “Many of them are currently arriving from border countries, such as Mozambique and Malawi. There are many orphans among them.
The African continent is experiencing the boom of the AIDS epidemic, which swept over Southern Africa at the end of the last century and the beginning of the current one. Many children are orphans because AIDS killed their parents”. 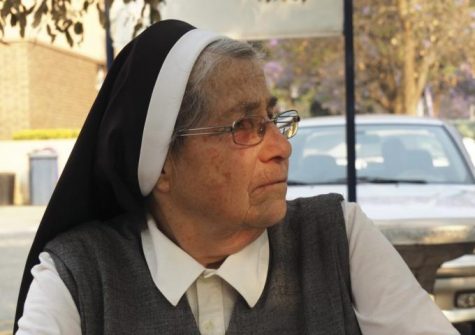 Sister Angela from Germany. She has been living in Zimbabwe for 56 years.

Several humanitarian and non-governmental organizations based in Harare are working to help these children. Keepers Alert is an organization directed by the local writer Patience Chiyangwa, and it offers support to orphans and street children through the House of Smiles. “Street kids come daily to this centre to take a shower, wash their clothes and feed themselves and we also offer computer classes, to those who are interested in them”, Chiyangwa tells us.
Harare, the ancient capital of Rhodesia, was, and still is, a beautiful city with wide avenues lined with jacarandas.
Today, the violet shade of its flowers offers shelter to hundreds of children and teenagers abandoned to their fate in a notorious alley that is only 100 metres distant from a central avenue that bears the name, paradoxes of life, of an African liberator.