The discovery by Egyptian archaeologists of more than a hundred sealed sarcophagi in the necropolis of the Ancient Kingdom of Memphis (2700-2192 B.C.) will allow researchers to gain information about daily life in this place.

There are places whose sacred nature remains alive over the course of centuries or even millennia. This applies especially to Saqqara in Egypt, thirty kilometres south of Cairo. This site, chosen as a necropolis by many sovereigns of Memphis, the capital of Egypt during the Ancient Kingdom (2700-2192 B.C.), is known as the location of the oldest stone pyramid in the world: the step pyramid of Djoser. 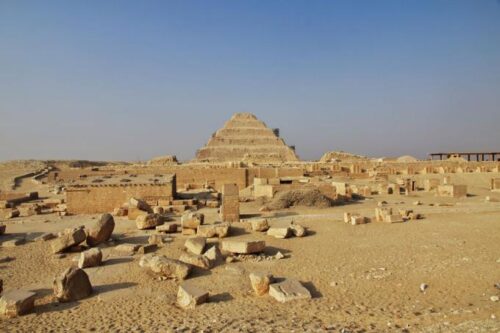 The ancient necropolis of Saqqara, in the desert of Egypt.

Nevertheless, five thousand years ago, at the dawn of Egyptian history, the sands of Saqqara began to hold the burial places of aristocrats and functionaries and also when, at the end of the Ancient Kingdom, the sovereigns decided to move their capitals far from Memphis and to choose new sites for their necropolises, Saqqara continued to house the tombs of many nobles and, more than anything else, the tombs of animals! Precisely at the start of the New Kingdom, three thousand five hundred years ago, various necropolises were built that were dedicated to sacred animals and some divinities. Among the more important of these is the Serapeum, the burial place of the Apis bulls, and the Bubasteion, dedicated to sacred cats and the goddess Bastet. 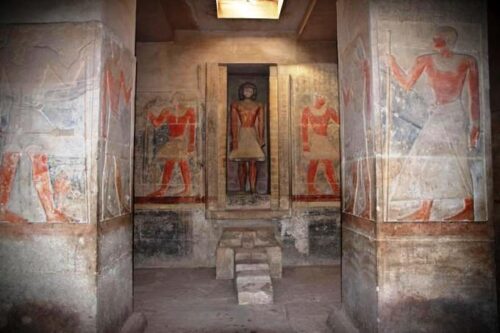 It was in the area of the Bubasteion, beneath the cliffs to the east of the pyramids of Djoser, that the archaeological Mission of the ministry of tourism and Egyptian antiquities made a large number of discoveries. The first in November 2018, announced to the world the discovery of an intact tomb of the Ancient Kingdom containing statues and decorations showing scenes from daily life and the afterlife. Inside the tomb, which belonged to the priest Wahty, the bodies of the whole family were discovered including, besides Wahty himself, his mother, his wife and four young children, probably victims of an epidemic.

Beginning in September 2020, the secretary of the Supreme Council of Antiquities, Mostafa Waziri, announced a series of discoveries that were truly sensational and concerned some funeral shafts full of sarcophagi: a type of burial typical of the functionaries of the XXVI dynasty (VIII-VII century B.C.). In early September, thirteen intact sarcophagi were found, followed by fourteen more after just two weeks and reached a total, at the beginning of October, of fifty-nine sealed sarcophagi, twenty-eight statues of Ptah-Sokar-Osiris, the god of the necropolis of Saqqara, and an extremely large number of hand-made objects that were part of the funeral requirements (for example, the ushabti figurines representing the servants that would have accompanied and served the deceased in the after-life). 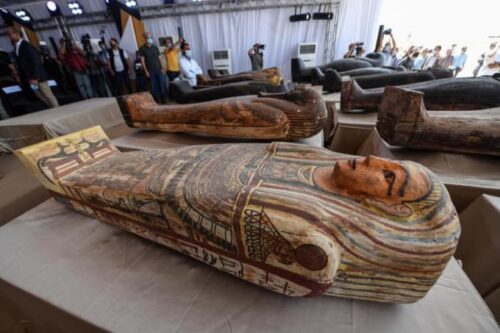 Sarcophagi, excavated by the Egyptian archaeological mission, are displayed during a press conference, Oct. 3, 2020, at the Saqqara necropolis, 30 kms south of the Egyptian capital Cairo. (Khaled Desouki/AFP)

This inspiring discovery was followed by a communique on 14 November announcing a press conference called by the minister of Tourism and Antiquities, Khaled el-Enany, giving the news of the discovery of more than a hundred sealed sarcophagi to be added to the existing number of fifty-nine.  As well as all of these, around forty wooden statues (some covered in gold) of Ptah-Sokar- Osiris, four gold-covered funeral masks, a score of canopic boxes for the entrails of the deceased and many other pieces of funeral articles, as well as two wooden statues 120 cm and 175 cm tall, belonging even to the Ancient Kingdom. The sarcophagi and their decorations were thought to belong to the dynasties of the Late Period (664-332 B.C.), and partly to the Ptolemaic Period, or the last centuries before Christ when Egypt was governed by the Macedonian dynasty after the conquest of Alexander the Great. During the same press conference, a sarcophagus was actually opened and the mummy was x-rayed which revealed some information about the dead person: an adult male, probably around forty years old, between 166 cm and 175 cm tall. The archaeological mission also announced another significant discovery to be revealed in the following weeks. 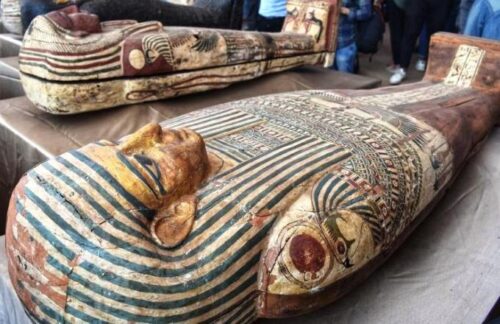 Apart from the impressive number of sarcophagi, which may well be added to, since the examination of the shafts is partly prevented by discoveries that have still to be extracted, that which these discoveries once again confirm is the chronological continuity with which, for at least four millennia, the site of Saqqara was chosen as their necropolis by the Egyptians. In this sense, it is remarkable that, alongside the sarcophagi of the Late and Ptolemaic Periods, statues and tombs more than two thousand years old should have been discovered. Besides the extraction of all the sarcophagi and the other objects still under the ground, people are anxiously waiting for the results of studies on the context of these discoveries.
Saqqara, having been associated for several centuries with the cult of sacred animals, was the destination of what may be called pilgrimages that sustained the activities of a vast priestly community probably connected to some hitherto undiscovered temples of which little is known. It is hoped that these objects, apart from their undoubted beauty, may throw some light on the intense daily life that was led in this extremely sacred area that still has so much to reveal to those dedicated to studying it.