Symbol of non-violent resistance to apartheid and the creation of a new nation, Tutu (1931-2021, Nobel Peace prize-winner for 1984) took the path of dialogue and forgiveness. Right to the end, he was the guardian of human values.

On 26 December last year, at the age of 90, Desmond Tutu died. He was one of the most important and meaningful figures of contemporary South Africa and known to all as ‘The Archbishop’.
He was born into a Xhosa and Tswana African family in the town of Klerksdorp in a province in the north of the country once called the Transvaal, the scene of battles during the Anglo-Boer War and the site of two concentration camps – one for whites and the other for blacks – in which a large number of people died.
An Anglican Christian, after his marriage to Leah Nomalizo – with whom he had four children – he entered the priesthood and studied theology at King’s College, London. In 1984, he was appointed bishop and, in 1985, Archbishop of Johannesburg; in both cases, he was the first African to occupy the posts. In 1986, he became Archbishop of Cape Town and head of the Anglican Church in Southern Africa. 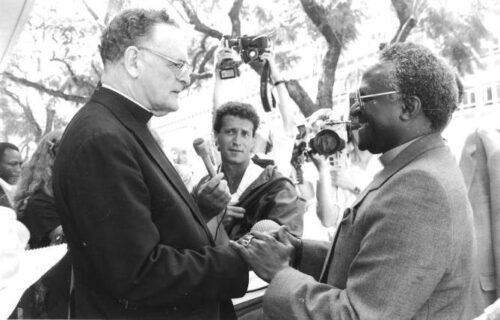 Archbishop Desmond Tutu with Catholic Archbishop Denis Hurley of Durban in a 1985 photo. Tutu had strong ties to Catholic Church.

From his boyhood, Desmond Tutu encountered the racism and discrimination of the colonial world. He wanted to study medicine but the socio-economic circumstance of his family prevented him from doing so and he took up teaching instead.
While teaching at the Johannesburg Bantu High School, he resigned in protest against the Bantu Education Act which, during the fifties, created a school system based on racism in the context of the apartheid system that came into force in 1948. As an Anglican pastor, he became chaplain to the Blacks-only University of Fort Hare, a centre of anti-apartheid resistance and a place of formation of the African elite whom he helped to guide and support during those years.

The choice of Soweto
After his period of studies in England, his strong, committed voice was increasingly heard in the public arena and his presence grew in influence in the society of his time. He used the dignity of the episcopal purple not for ritualistic ceremonials but to add strength to the burning issue of support for human rights, always on the side of the weak and oppressed to the extent that he became a most popular champion of resistance against the apartheid regime and was awarded the Nobel Peace Prize in 1984. He helped to orchestrate the support of different Christian churches for anti-apartheid movements by means of finance and various sorts of logistic and cultural collaboration. 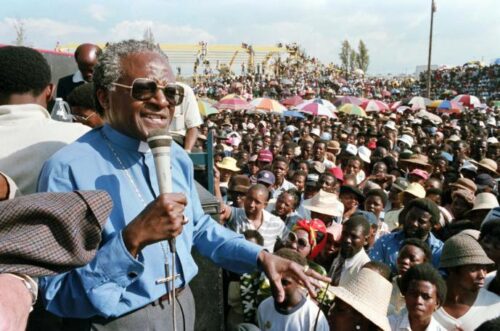 At the height of the anti-apartheid struggle, Archbishop Tutu addresses a meeting in Alexander Township (1986).

He kept up a lively dialogue and friendship with the leadership of the African National Congress (ANC), especially Sisulu, Thambo, and Mandela. He knew how to be close to his people in the worst moments of crisis and bloody repression such as that of the Sharpeville Massacre in 1960 and the Soweto revolt in 1976: the same Soweto where he had chosen to live (in Vilakazi Street, not far from the Mandelas), instead of opting to isolate himself in his residence as his episcopal status would have allowed him.
He was always, in short, a man of the people in every moment of his life and, as such, he fought alongside the movements of change, insisting on adhering to the policy of non-violent resistance that was always part and parcel of the original ANC. 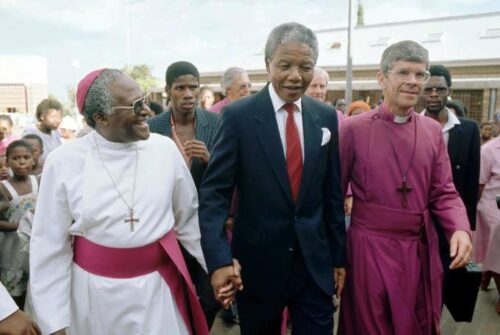 Desmond Tutu was a man of determination and a character who was sometimes impulsive but always tempered by the deep empathy that bound him to human beings and governed by a deep respect and love for the whole of humanity, beginning with those who seemed most in need of help.Gifted with an intelligence that was both lively and reflective, he had explored the more advanced aspects of African liberation theology and had drawn his own ethical and pastoral conclusions, to the point of devoting himself with indomitable passion to the cause of justice and human rights.
His personality was especially attractive, and he had an extraordinary ability to socialise and communicate at all levels; some of his public speeches were truly unforgettable such as the one he delivered after the death of the popular ANC leader Chris Hani, assassinated in 1993, on the eve of the first democratic elections.

Helmsman of Reconciliation
Though during the apartheid era, Desmond Tutu had been an important element of support for the resistance and, at the same time, of opposition to the ever imminent threat of the outbreak of violence, after the liberation, his presence was fundamental to the development of a transition to a democratic system that was as peaceful and moderate as possible. Consequently, it happened that, when Mandela, who had now become President, decided in 1995 to launch the process of a South African Truth and Reconciliation Commission (TRC), it was inevitable that he should entrust its presidency to Desmond Tutu. 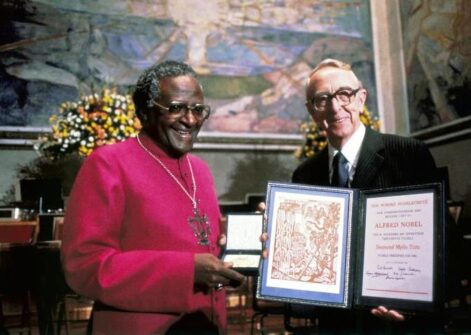 The TRC operation proved to be a complete triumph for the figure of Desmond Tutu who assumed the role of leading coordinator at a crucial point in the life of the country, a time when the horrors of the past were faced, seeking to transform the wounds of the social body into signs of consciousness and memory that could be acceptable to those who had suffered unspeakable horrors and might lead to the discovery of common truths. The Archbishop became the great director of a collective drama that engaged the consciences of the entire nation from 1996 to 1998, through a series of public sittings of the TRC. During these sittings both those who had suffered wrongs and violence as well as those who had inflicted such violence met face-to-face, during which countless hidden stories became known and all sorts of complicity and allegations were revealed, in a tense atmosphere that strained towards the accomplishment of what was hoped to be for the good of all.
The work of the TRC had its ups and downs and was not always favourably accepted. Keeping a steady course in this undertaking must have been very hard for the little man dressed in purple who was seen to take upon himself an immensity of suffering and despair, together with the negative resistance of those who could not, or would not, see what was happening in South Africa. 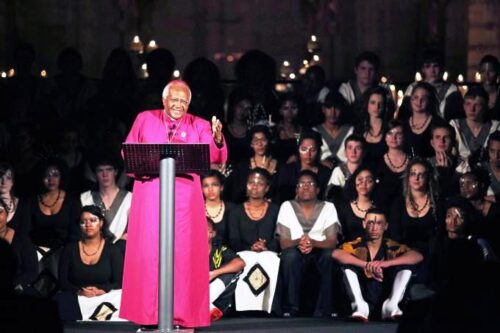 Archbishop Desmond Tutu addresses the Academy of Achievement at St. George’s Cathedral in Cape Town, during the 2009 International Achievement Summit.

There were times when the Archbishop seemed to vacillate, like when he gave way to uncontrollable weeping after the first day of depositions by the victims, or when he found he was suffering from cancer. Nevertheless, he managed to recover and continue his work of pursuing with unmeasured energy the search for the facts hitherto concealed and denied. One of the interesting aspects of his participation in the work of the TRC was the language he used to mould the experience: as noted by Antjie Krog in ‘Land of My Blood’, “not the language of declarations, of the news or testimonies.
It is the language that spreads like wildfire, elaborated by the vision of where we want to go and the awareness of where we are now. It is the language that draws the people together in the process”.
His work as commissioner was not without its critics and there was no lack of dissent even among those who were by his side in the resistance struggle. It is beyond doubt that he, as a pastor, gave a Christian slant to the work of the TRC, being indulgent towards a request for forgiveness even though this was not among the premises set out by Mandela. The victims were to be asked to tell all but not necessarily to forgive, just as the perpetrators were to be asked simply to make a total and complete confession without, however, necessarily requiring their repentance. 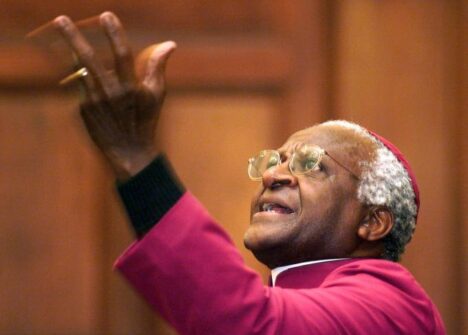 Furthermore, there were many who rebelled against the idea of restorative justice for the victims but without demanding retribution from those responsible for the long-drawn-out atrocities. In any case, it was decided to grant an amnesty to those who had acted out of political motives and who now made a complete admission of responsibility, while acts deemed to be ordinary crimes or perpetrated in yet unclear contexts and not yet admitted, were excluded. Confession assumed a major role in this protracted public drama, and it did not always appear to be sufficiently credible or acceptable.
The country emerged shocked and shaken by the public procedure but still there were those who kept out of it whether through deviousness or an invincible internal resistance to speaking openly and bringing to light matters that were often painful as well as shameful. Nevertheless, it must be admitted that the TRC set in motion an extraordinary regenerative process directed towards healing a wounded, ulcerated and divided nation; and that Desmond Tutu held the reins of the difficult process with firm hands and a profoundly compassionate spirit.
During the following years, the Archbishop continued his work as the guardian of human values and in support of the achievements set out in the new South African Constitution. He was the champion of the fight against all forms of discrimination based on race, religion, gender or homophobia, and in favour of the individual right to euthanasia and abortion (a policy that often brought him into conflict with the ecclesiastical establishment).
In politics, he fought against the corruption that was undermining the system of the country and he was a bitter opponent of President Jacob Zuma and his entourage. To sum up, Desmond Tutu never abandoned his principles of life and public or private morality, and leaves behind an indelible record for the memory of the nation.