The 2,720 kilometre wall, which  separates the areas occupied by Morocco and those liberated by the Polisario Front in Western Sahara, is actually the largest active military barrier in the world,  and the second longest wall after the Great Wall of China.

One can observe the wall only from the mandatory safety distance of five kilometres, imposed by a mine field. From that distance, the barrier, which separates the Polisario-controlled areas from those occupied by Morocco, looks like a large mound of sand in the middle of the desert. This 2,720 kilometre military wall, is the largest active military barrier in the world and the second longest on the planet, exceeded only by the Great Wall of China (21,196 km); and yet it has remained practically invisible to the outside world. 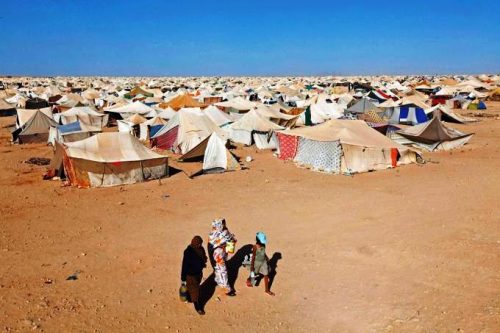 At a time when the current president of the USA, Donald Trump, has made talk of building walls to secure borders become fashionable, by calling for the expansion and improvement of the already existing wall at the U.S.-Mexico border(1,123 km), it is worth comparing the barrier dividing Western Sahara with the 819 km long Israeli West Bank barrier;  with the wall built between Pakistan and India which is  about 750 km long; and the one that divides the two Koreas whose length is 248 kilometres;  the 12 km-long Melilla fence; that of Ceuta which extends 8 km, and the historic Berlin Wall that was 155 kilometres long.
The Western Sahara wall is not a linear construction, but a succession of six barriers built between 1980 and 1987, during the war between the Polisario Front and Morocco, after the Alawite occupation – with the Green March, in 1975 -, and  the definitive withdrawal of Spain from its province number 53, a year later.

A suggestion from ​​Israel
“By 1979, when Mauritania withdrew from the conflict, the Polisario Front had been able to recuperate 80% of the Sahrawi territory. The end of the 1970s was marked by intense fighting between Moroccan forces and the Sahrawi army. During those confrontations, the Moroccan forces, despite their superiority in numbers and military power, had many military defeats. Israeli military advisers suggested to King Hassan II of Morocco  that the country change strategy, moving from offensive to defensive tactics in order to stop the attacks of the Sahrawi army, and to protect  the so-called “useful triangle” which includes the cities of El Aaiún, important for its fish catch, Bu Craa, for its phosphate mines,  Esmara along with the south point of Dakhla , also important for their fish catch. 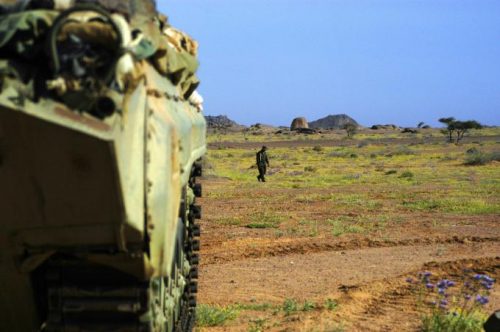 King Hassan II of Morocco therefore ordered the construction of a huge line of defensive walls whose construction lasted seven years. “Morocco is the closest Arab country to Israel in history” says Mohamed Uleida, director of the National Resistance Museum, located in the Saharawi refugee camps in Tinduf (Algeria) .
Tiba Chagaf, co-founder of the youth platform “Cries against the Moroccan wall”,  describes the physical structure:“The wall is a series of sand and stone walls of two to three meters high; it extends along topographic high points (such as peaks and mountains) throughout the Sahrawi territory. It is protected by bunkers, ditches, trenches, barbed wire, mines and electronic detection systems and defended by more than 150,000 Moroccan soldiers.
Every 5 kilometres of the wall, there is a military base of about 100 Moroccan soldiers. About four kilometres behind each major observation post, there is a mobile rapid intervention force (with armoured vehicles, tanks, etc.) A series of overlapping fixed and mobile radars, with a range of 60 to 80 km, are placed along the wall.” 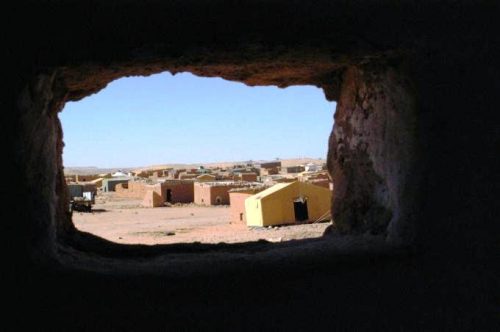 According to  Mohamed Uleida,: “Morocco spends 3.5 million Euro daily to maintain the wall, since every five kilometres there is a base with two guard posts, on the right and on the left, with radar that has a range of about 60 kilometres, and between each of these bases, there is another military sub-base, in addition to 240 heavy artillery batteries and 20,000 kilometres of barbed wire. The money needed for the wall derives from three main sources: first of all, from the generous help of the Saudis and the Gulf monarchies; second, from the exploitation of Saharawi territory, from the phosphates exported to USA and fish to Europe; and the third, the millions of Euro that Morocco receives from Europe, under the pretext of combatting illegal immigration ”. 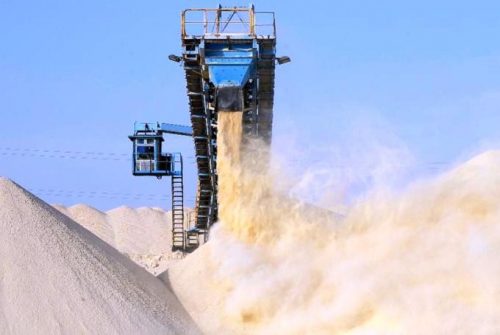 Phosphate being processed at facilities operated by Morocco’s state-owned OCP, near Laayoune, capital of Western Sahara,

According to the International Campaign to Ban Landmines (ICBL), which  is a global network in some 70 countries dedicated to putting an end to the suffering caused by antipersonnel landmines and cluster bombs, Western Sahara is one  of the ten most mined areas in the world.
Malainin Mohamed Brahim, director of the Sahrawi Mine Action Coordination Office (SMACO) estimates that the fortified sand wall is lined with over seven million mines. “It’s impossible to calculate exactly the total number of mines that infest the entire area, because there are many of them also in the occupied areas and Morocco does not allow international organizations to enter there. We can only estimate the number  of mines surrounding the wall, which is between 7 and 10 million mines of different types: anti-tank, anti-personnel mines, unexploited shells, and cluster bombs and fragmentation, the latter being the result of aerial bombings. There is an estimated 40 million in the rest of the territory. In early 2019, the Polisario Front destroyed, in the presence of UN representatives, 2,500 anti-personnel and antitank mines, collected in the liberated territories of Western Sahara.

Thousands of dead
According to ICBL, since 1975, more than 2,500 people have been killed by landmines in Western Sahara. The United Nations Mine Action (UNMAS) team estimates that 80% of the victims are civilians. “We have conducted a census which, though it only includes survivors, shows that the number of victims of landmines has reached 1,700 people. 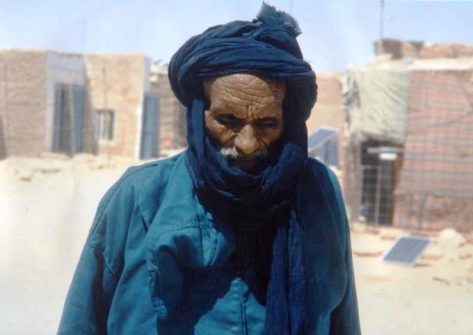 We do not have figures on fatalities, but we think that the number of 2,500 dead, estimated by ICBL is correct , ” says Aziz Haidar, president of ASAVIM, the Saharawi Association of Landmine Victims, who had both legs amputated after a landmine explosion in 1979. Aziz adds: «ASAVIM has helped more than 600 people by providing crutches, prostheses, wheelchairs, medicines, beds for paralyzed people or financial aid to start small cooperatives or businesses”. “Due to their nomadic lifestyle, Bedouins and their herds of camels are those more affected by mines. Besides, victims increase during the rainy season because there is plenty of grazing land in proximity to the wall. Not only the Saharawi shepherds take their herds to graze in the liberated territories, but also shepherds from neighbouring Mauritania, because there are not such good pastures there, ”says Malainin, director of SMACO.

Not just a physical separation
The physical barrier represented by the wall also involves other types of less visible separations. «The structure divides a people, the majority of which lives under Moroccan occupation – forty percent of the population of El Aaiún, and twenty percent of that of Dajla is Saharawi.  As a matter of fact there is a strategy planned in order to eliminate the Saharawi identity. For example, there is not a single university in the occupied territories, and the Saharawi have to go to Morocco to study. 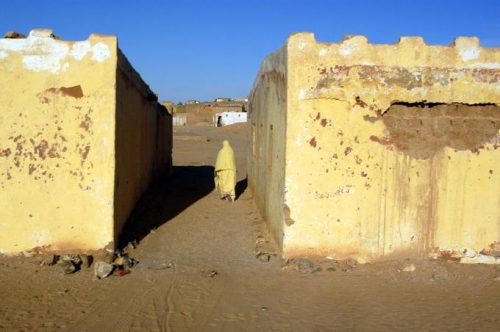 The Hassania dialect is disappearing as well as our traditional clothing. The Saharawi people are victims of constant cultural plundering. We are children of the clouds. Our culture is transmitted orally.  Landmines endanger the traditional Saharawi lifestyle linked to the desert and prevent divided Sahrawi families from transmitting to their children the traditions and cultural values of their society.  Our grandfathers are our library, when they leave us we lose our “oral books” and therefore our culture and identity forever, ” laments Tiba Chagaf, co-founder of the Cries Against the Wall platform.
Malainin Mohamed Brahim, director of SMACO, underlines: «The wall deprives us of our natural wealth and a decent standard of living. We have lived for 43 years in refugee camps and we survive thanks to international aid, though our territory is one of the richest in the world. 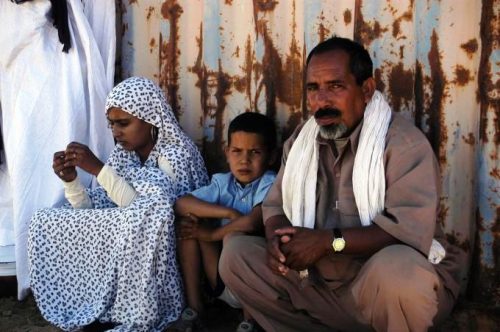 The wall has also an environmental impact on the area, in fact, the construction of the wall and the infrastructures that it contains have led to profound changes in the surface of the land that has become more vulnerable to wind erosion and water stagnation.
Due to its structure, the wall acts as a barrier to the flow of water into the areas southeast of the wall. This situation has increased desertification in those areas and hinders agriculture, while on the other side of the barrier there is fertile land.”
“The wall also transforms the occupied territories into a large prison.
This situation has contributed to aggravating the sense of isolation, alienation and vulnerability among Sahrawi population in those areas. War can’t end with the wall still standing”, concludes the president of ASAVIM, Aziz Haidar.
Eugenio G. Delgado