The birth of a child is always an important event that brings joy to the Borana. The joy is all the more important when the child is
a first-born or a male.

The announcement of the birth is made by the father who shouts to all “Olla, ilmi dallae buna tambo nyada” (People of the village, a son is born to me; drink buri –  fresh milk with coffee beans –  and chew tobacco”. The people gather while the women sing “You have given me a descendant. Alio is your name, give me a son. As the flowers of the grass grow, so let God make grow the flower of the life of this son”. 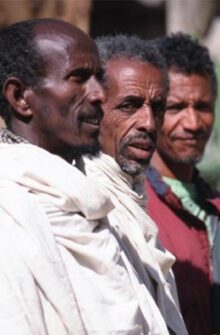 The celebration is held between six months and two years after the baby’s birth. Eight days before the ceremony, a large hut, the galma, is built and the child’s father invites the family’s numerous relatives to the naming ceremony. Each guest to the event brings an oodha full of curdled milk as a gift and that is why the ceremony takes place after the heavy spring rains have greened up pastures that provide abundant forage for cows. The arrival of the guests from the nearby villages indicates that the party is about to start. Seven people, the torban, help the baby’s father throughout the event. Two sticks, five twigs (one of which is bigger than the others), and a big branch are placed in a row before the entrance of the cow fence. One of the sticks, the wades, is for the baby’s father; the other, the danis, is for the baby. Two of the twigs, the ootti, are placed above the door of the galma; the others, including the largest one, are put on the wall at the bottom of the hut. The branch, called gulanta, is located in the centre of the place. 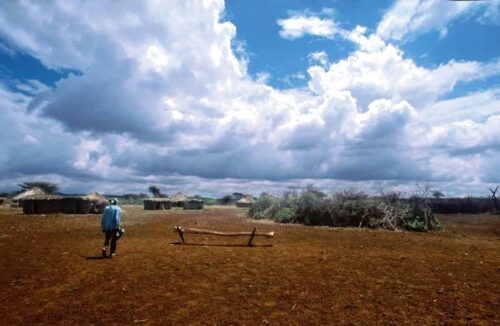 The baby’s father puts a lock of the baby’s hair and his umbilical cord, which has been cut into small pieces and which has been kept by the baby’s mother in a flap of her dress until the day of the ceremony, into a wooden bowl (qorri). Then the father puts the mchira, a copper bracelet, which is a symbol of belonging to the tribe, on the baby’s wrist.
The two parents enter the galma to prepare the buni, a ceremonial drink made with toasted coffee beans and fresh milk. A few drops of oil are poured on the palm of the hands of the guests, and they spread it on their wrist and face. Everybody drinks the buni while an elder prays.
Women start milking cows at about nine o’clock in the evening, then everybody gets back to the galma. The baby’s parents eat eight roasted berries: this gesture symbolizes that their son is now officially entering the family. Some women bring some milk. One of the elders intones a sort of litany, to which everyone responds. Then the father lifts the baby up in his arms and says, wario gollicha makes jeda jeda, (the baby’s name), the others reply, Gudaa fate hate bulfad, (“May the baby grow well, long life to his father and mother”.)
The invocation is repeated 16 times in turn by the father, mother, grandfather and grandmother (for a total of 64 times). Then a silence filled with mystery falls. After a while the baby’s father starts to sing a song that invites guests to celebrate: Ho, hoyoyo jilla, hahahe! Another three songs are sung to wish the baby a happy life, many cows, green pastures, and abundant water. 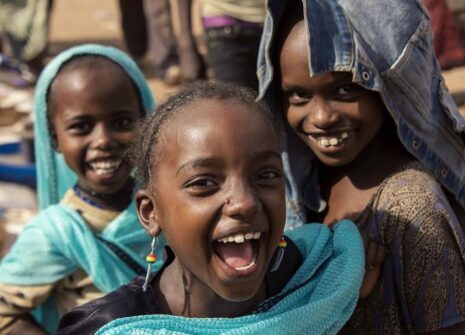 Outside the hut, people dance, women clap their hands, while young people do high jumps as the dance requires. Curdled milk is served to guests uninterruptedly.
At about three o’clock in the morning the dances end. Everyone goes to sleep while the baby’s father and the seven torban, remain in the galma and continue to sing until the sun rises.
At the beginning of the new day, the sorio sacrifice is performed: the baby’s father slits a bull’s throat. The danis and wades sticks are placed under the rivulets of blood so that they get soaked with the bull’s blood, while the reading of good wishes is performed and some pieces of meat are distributed to those who brought milk.A final ceremony, the handura (umbilical cord) marks the end of the great event. The baby’s father, followed by the mother who holds the baby and by the grandfather, enters the cattle fence; he holds the bowl containing the baby’s umbilical cord and the lock of hair. He then puts pieces of this mixture on the back of some cows, the ‘baby’s handura cows’, that symbolize the baby’s legacy, the guarantee for a wealthy life. This ceremony is repeated for four days. Before leaving, the elderly people make good wishes and some meat is offered to guests before they return to their own village and their work. (P.C.)