Half of the African urban residents live in one of the more than 7,500 medium or small continental cities. They are often excluded from investments and public services. But they enhance the continent’s extraordinary heritage of biodiversity.

Large metropolises attracted a monopoly of attention to their immense social and environmental challenges, but the data on the urban phenomenon in Africa tell a different story.
If there are now at least 30 cities with over 2 million inhabitants, they represent only 30% of the continent’s urban population. Half of the urban residents, on the other hand, live in one of the more than 7,500 medium or small cities, mostly unknown centres with a population of between 10,000 and 300,000 inhabitants. 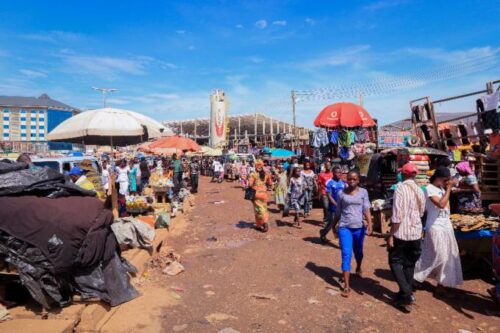 The inexorable rush towards the city of the African continent is not, therefore, exclusive to megalopolises but, on the contrary, is driven above all by small and medium-sized centres. A trend destined to consolidate: these cities generally have higher birth rates and levels of internal migration than metropolises since they represent a simpler and cheaper landing point for those who decide to leave rural areas.

Politics, investment, and infrastructure
The condition that unites hundreds of medium and small cities on the continent is undoubtedly exclusion: a problem that triggers a vicious circle that is difficult to break and involves politics, economics, and opportunities for access to wider connections and networks. From a political point of view, secondary cities are often in a sort of limbo that blocks access to programmes and investments, excluded both from development policies for rural areas and from urban planning and redevelopment programmes. The latter, in fact, are often tailored to the needs of large cities that have more stringent problems but also a greater capacity to attract investments and international aid. 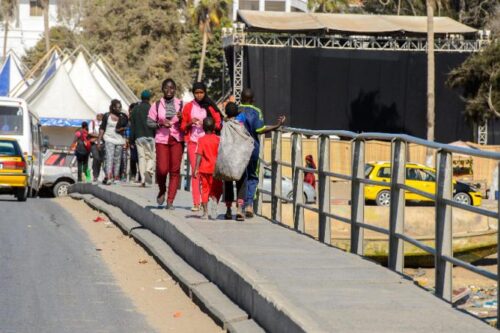 People walk along the bridge beside the road in Saint Louis, one of the biggest cities in Senegal. 123rf.com

The latest UN-Habitat report on the state of African cities (2018) focuses precisely on the ability to attract private foreign investments, considered one of the major drivers of urban development. Apart from sporadic cases linked to mining areas or strategic corridors, such as the coast between Lagos and Abidjan, secondary cities are totally excluded from the important flows that affect the continent. The scarcity of public investment in services and infrastructure is also a sore point. The boom in mobile telephony has made the possibility of communicating accessible to many, but the same is not true for access to electricity, water, or transport networks which, although constantly growing, spread at a slower rate than the rates of urbanization and the demand for connections and services in peripheral areas. The so-called micro-grids, small autonomous grids usually powered by solar panels, are changing the face of access to energy in the most remote areas, yet even in fast-growing countries, such as Senegal or Ghana, the nights of many secondary cities are still punctuated by the hum of diesel generators.

Not just the economy
Although some small cities boast ancient cultural traditions, university education is mostly concentrated in large cities and determines the constant drainage of the best talents who will hardly return to the ‘province’ to invest their skills. Furthermore, the scarce opportunities for higher education limit the spread of a middle class capable of generating development and bringing skills that are more than ever necessary in local authorities which are called upon to increasingly complex tasks by the processes of political and administrative decentralization. The scarce attention that has often been given to the training of institutions and local officials is one of the sore points of these processes and has contributed to paving the way for environmental degradation and indiscriminate consumption of land due to a lack of spatial planning. 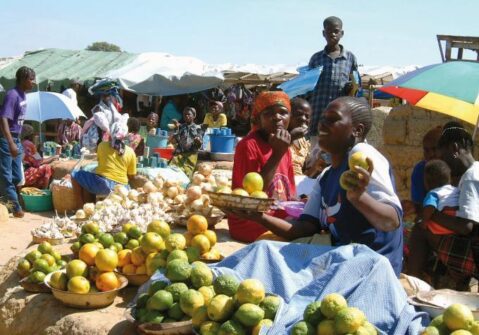 Market in Huambo City. It is the third-most populous city in Angola, after the capital city Luanda.

Due to these multiple levels of exclusion and poor connectivity, many small and medium-sized cities, although more ‘on a human scale’ and liveable than African metropolises are not very attractive, are socially fragile, and find it difficult to find their own territorial identity. This identity and an ability to create networks that are more than ever necessary in a perspective of resilience are crucial. If their size and political weight protect large cities from sudden economic or demographic crises, medium or small cities are often at the forefront of suffering from devastating effects of diplomatic clashes, price fluctuations, and decisions taken elsewhere.
Walking through the dusty streets of Assab, in the far south of Eritrea, it is hard to believe that the city was once one of the most flourishing ports of the Red Sea. The crisis with Ethiopia has marked its fate and the recent thaw will hardly be able to reverse the trend, especially after the expansion of the Addis-Djibouti railway.

Environment and food supply chain
African secondary cities, therefore, live in a situation that is not too different from the problem of the ‘peripheries’ of the rest of the planet, aggravated, however, by the structural problems of many states on the continent and by the delay with which innovations and ‘development’ reach the most remote areas.
A condition of exclusion that does not mean marginalization; the exponential growth of both the number of inhabitants and settlements that reach the size of an urban centre makes these cities the leading players in the great transformations that are affecting Africa. All the biggest games, from the demographic to the environment and to the question of agri-food production are played here. 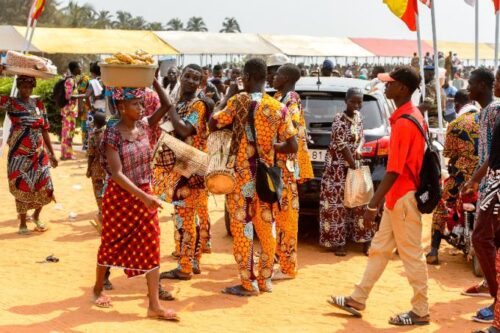 Ouidah. It is a city on the coast of the Republic of Benin. 123rf.com

Those who have visited an African market cannot forget the enveloping vortex of colours, sounds and smells; in small towns, these weekly markets have always been a fundamental point of reference for many surrounding villages and small agricultural producers in the region, but lately, they have also been sources of food supply for the metropolises. The rural areas surrounding large cities, in fact, are increasingly compromised by inexorable overbuilding and extensive exploitation; hence the need to organize complex supply chains in which secondary centres become focal points for bargaining and exchanging agricultural products. The prices of many commodities in the Addis Ababa markets are decided in Holeta, Dima or Debre Zeit, half-known agricultural towns less than 50 km from the capital, where greenhouse agro-industrial production is increasingly widespread to meet growing demand.
Some secondary cities, therefore, form a network that determines the sustainability and, in some cases, the very survival of large metropolises, a network that should be enhanced at a strategic level to further safeguard local production and the environment.

Safeguarding traditions
The main ‘biodiversity’ kept in the secondary cities, however, is that which is historical, cultural and artistic. Unlike the capitals and metropolises, largely born in colonial times and overwhelmed by too rapid development, the smaller centres can hide the evidence of an ancient past, tracing caravan networks, border lines, centres of power or culture. In them, there may be the hidden remains of monuments or traditional architectural typologies still in use, but above all an enormous quantity of priceless intangible assets: knowledge, traditions, languages, religions, and customs linked to the rural world. Much of the development opportunities of many small and medium-sized cities pass through the challenge of safeguarding these elements. 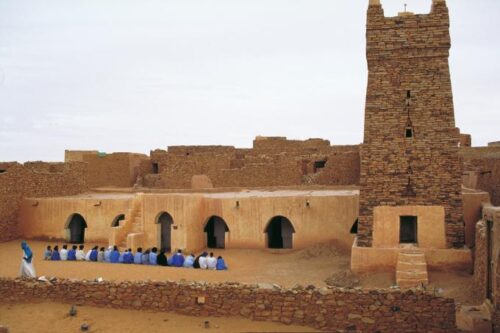 The Chinguetti Mosque was an ancient centre of worship created by the founders of the oasis city of Chinguetti in the Adrar region of Mauritania in the thirteenth or fourteenth century.

We may take, for example, Chinguetti, a famous Saharan city that holds a priceless heritage of private libraries where manuscripts dating back to the 10th century are kept. The inclusion in the UNESCO list is not enough to stop its depopulation and the advance of the sands, which increasingly undermine the ancient stone streets, threatening to bury the city. Without targeted development and enhancement policies for responsible and cultural tourism, even this green lung of knowledge risks disappearing. “We are foreigners in our own cities”: with these words already 40 years ago the Cameroonian sociologist and theologian Jean Marc Ela warned against the risks of the loss of identity in the new cities, which at the time were beginning to grow inexorably. Today these words are in danger of coming true; the disruption and mind-boggling figures of megalopolises are drawing the continent towards the future but at the high price of sacrificing customs, cultures and knowledge on the altar of an often-contradictory modernity. The role of secondary cities can instead be that of a link between development and tradition, preserving and even enhancing the extraordinary biodiversity heritage of the continent. (Open Photo: Kumasi, Ghana. 123rf.com)