Antarctica enjoys an apparent calm, beyond the logic of power that involves the rest of the world. The ambiguous Chinese interest in the continent and the latest Peking decisions seem to have disturbed the Western powers.

The Antarctic is one of the few places in the world where all human activity is regulated by treaty. Argentina, Australia, Belgium, Chile, France, Japan, New Zealand, Norway, the United Kingdom, Russia, South Africa and the United States: these are the twelve states that in 1959 decided to safeguard the continent of ice with the Antarctic Treaty System (ATS), which was signed by a further forty-one countries before the end of 2019. The ATS has a dual purpose: to avoid conflict or military activity in Antarctica and so stimulate international cooperation in scientific research. 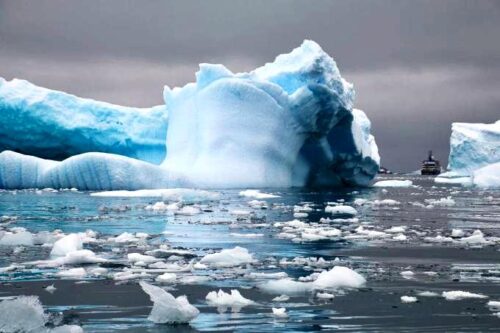 Article 1 of the Treaty declares that ‘[…] only peaceful activities are authorised’ and sanctions the prohibition to carry out ‘[…] any military operations’. To the contrary, Article 3 stimulates the exchange of scientific information and technical personnel between the member states. Furthermore, the ATS provides for the administration of the continent through the institute of the condominium and entrusts the territory to its twenty-nine consultant members of which seven (Argentina, Australia, Chile, France, New Zealand, Norway, and the United Kingdom) have territorial claims and twenty-two have various prerogatives in voting and scientific research.

The New Silk Road Project
Whereas, during the nineties, the main fears concerned the first signs of climate change, today, what most worries the western member countries of the ATS are the possible implications of a Chinese presence on the continent. Antarctica has gradually come within the sphere of Chinese interests in two distinct phases. The first started in 1983 with the ratification of the Antarctic Treaty and the acquisition of consultant state status in 1985, the year when the first Chinese polar station, the Great Wall, was founded. Four years later, a second base, Zhongshan, was opened. Initially, the Chinese expeditions were guided by national pride: the Chinese Communist Party (CCP) wanted to show the western states that, despite the ‘Century of Humiliations’, the Chinese were able to confront the most inhospitable continent in the world.
To complete this phase, the Kunlun and Taishan stations were opened in 2009 and 2014, respectively. 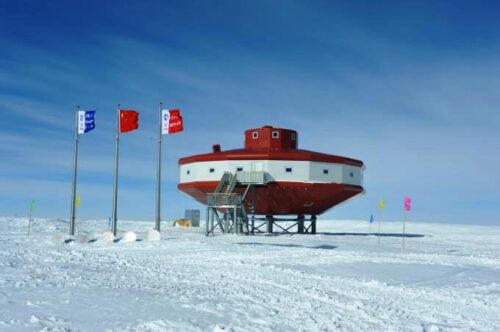 The Chinese Taishan Station in Antarctica was erected in January, 2014.

The second phase began in 2017. Following the 40th Antarctic Treaty Consultative Meeting in Peking, during which the White Book on the Antarctic was presented, Xi Jinping ambiguously expressed, on the one hand, the desire not to alter the status quo of the continent and, on the other, a geo-economic interest in the region.
These are two important elements for Peking and have nothing to do with mineral resources for the time being.  The first concerns the fishing resources of the Antarctic Ocean: the cold waters swarm with krill and China needs low-cost protein to feed the poorer classes of the population. The second element is closely bound to commercial questions. Xi, in fact, has more than once declared he wants Antarctica to be part of the New Silk Road project.

From Antarctica to the Stars
China’s interest in Antarctica also passes through the filter of its military power and it is this that worries the western members of the ATS.
It is now well known that military personnel of the Popular Army of Liberation (PAL) are constantly employed at the Chinese polar stations to develop the new BeiDou satellite positioning system. 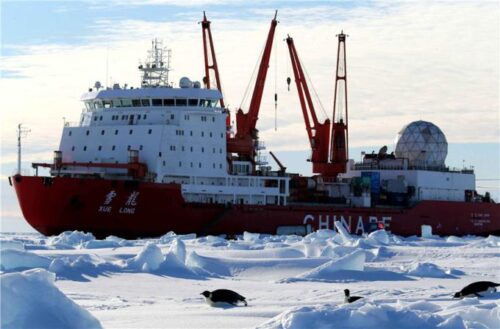 Besides being a challenge to the United States GPS, this also has military implications: it would guarantee facilitating or blocking precision missile attacks. Moreover, the same high-frequency antennas used for the BeiDou would be capable of stopping any polar satellites considered hostile. Since it has never had any Antarctic projects, China will probably not claim any part of the continent; Chinese interests aim at ensuring it will not be excluded from the area in any future use of its mineral deposits. Nevertheless, the question must be asked whether Chinese strategic interest in the area will lead the United States to broaden the issue here as well, with obvious environmental consequences.