The Gerewol is the festival of bodily beauty. The young Bororo, after spending ascetic months in the savannah, paint their faces with the most extravagant designs to accentuate their extended lines.

On a pre-selected plain, the various groups set up camp with small huts made of branches and mats. The enclosure for the livestock is close by. At dawn, a woman sings: ‘The morning star has risen. O you, most beautiful girls, and you, charming youths, arise. The great of the Gerewol begins’. Both the youths and the girls dress up for the feast: ethnic tattoos, abundance of necklaces, bracelets and rings. Narrow black, white or yellow lines from forehead to cheeks help to make the noses appear still longer and sharper. Each one looks at himself or herself in a mirror and is pleased with his or her beauty. What matters for the young Bororo is to differentiate oneself as much as possible from what distinguishes the appearance of the Africans of the central west.

The signal for the start of the feast is given by a second song. The young men, unmoved, with painted faces, smiling and with their lips painted black, begin the first moves of a ritual dance. Hand in hand and forming a circle, they begin to sing a monochord song based on a single, continuous note. In a few minutes the harmony becomes almost hypnotic; the appearance of the young people creates a hallucinogenic vision. The dance consists of a series of slow upward jumps in which the body is bent, almost in an arch, while the face assumes bizarre expressions. The dancers roll their eyes, show their teeth, puff out their cheeks, and grimace with their lips, turning them outwards in impossible ways or making them tremble. Their aim is to show off their attractiveness, their magnetism, their personality. The eyes fascinate and frighten. Some are able to roll one eye while keeping the other still like that of a fish. 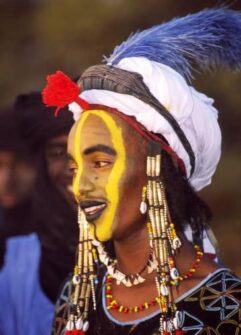 Four men, winners of former ‘editions’ and now appointed judges, observe and urge on the dancers. Novices and beginners soon give up and go to one side, leaving the true champions to continue the contest. Excitement grows. The challenge is hard. Some surrender and the remainder rejoice. They change their ostrich feathers for others; they touch up their paint or go over it again, increasing the magnetism of their faces.The girls have hitherto confined themselves to watching and commenting on the appearance of different dancers. Now, however, an elder approaches and offers them his hand. Now free to approach the dancers, their presence adds fuel to the fire. Covering her critical eyes with her left hand, the first girl chooses a youth with a gracious gesture of her shoulders. He is ‘her’ togu. But he is not necessarily the most interesting of all. That decision belongs to the judges and will be made at the end of the festival. 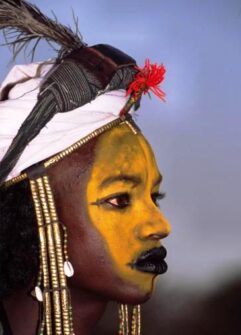 The Wodaabe believe the heart is the seat of the togu. A person with togu speaks with the heart. Togu is a way of being, based on behaviour that is noble and refined behaviour but is also courageous and warlike. The dancers continue to dance. The second girl comes on the scene, then the third and all the others. Each one chooses her young man. ‘Married’ to a man not of her choosing, the girl is now free to have the man who made her heart beat faster. At least for one night! Nevertheless, the Gerewol is also the appropriate occasion for a true teegal marriage. The union will be sanctioned by the results of the first night of love spent together. If a child is born, it will be a ‘love- child’. Once the seven days of the festival are over, filled with memories and renewed in spirit and in body, each one returns to their usual way of life. “We are not afraid of the difficulties of life like drought or death. As long as we have feet to walk with, we will take our herds where the land is fertile. Our life is like the sand of the desert, always moving, without end. And when we die we shall continue to walk and to watch over from above the herds of our children”.