Drums play an important role in the life of African people. Traditionally, drums represent the soul of the community. They are used for celebrating ceremonial events and rituals within the community. Here are some popular African drums.

The Karyenda comes from Burundi and used to be the main symbol of the country. It also represented the Mwami (King of Burundi) and had semi-divine status. It is believed that the Mwami could interpret the beatings of the karyenda into rules for the kingdom.
As expected, these drums were sacred and were mostly used in rituals, major events for the king, such as royal coronations. They were also used at funerals, and weddings were announced through the drums. The beating of the drums also signalled certain rites, such as when the Mwami rose in the morning or retired in the evening.

Djembe or Talking Drum
The talking drum dates as far back as 500 a.d. where it served as the secret drums in major societies for the rite of passages, ancestral worship, rituals, and social dances. According to the Bambara people in Mali, the name of the djembe comes from the saying ‘Anke djé, anke bé’ which translates to ‘everyone gathers together in peace’ and this name defines the drum’s purpose. In the Bambara language, ‘djé’ is the verb for ‘gather’ and ‘bé’ translates as ‘peace’. 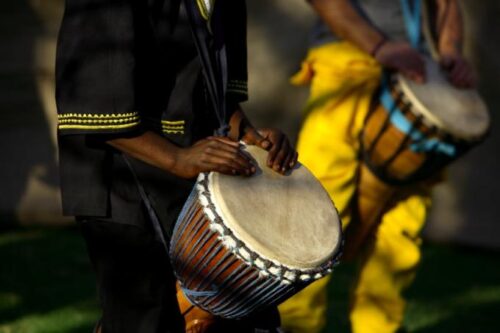 It is believed that this drum contains three spirits. First, the spirit of the tree from which it was made. Then, the spirit of the animal whose skin is played, and the spirit of the carver, or the one who cut the tree and the people who assemble the drum. Traditionally, only those born into the djembe family would be allowed (or interested) to play the djembe. This caste sings and performs during rituals, baptisms, weddings and sometimes funerals, and are trusted with the music of their ancestors.
Talking drum is a two-sided (with two stretched membranes) hourglass drum (made from a single block of wood), which is played with a curved stick and held under the armpit (sometimes called the armpit drum for this reason).  The arm presses on strings that stretch the skins (originally made of animal guts), modulating the sound. 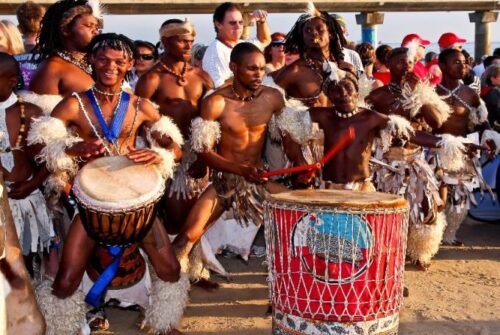 Some peoples, such as the Hausa of Nigeria or the Bulu of Cameroon are able to produce sounds that are very similar to the human voice. From this characteristic comes the name.
Already known during the Ghanaian Empire, it is an instrument of the Hausa and Yoruba tradition and is often used by griots (singers and guardians of the oral tradition of West Africa).
The talking drum is known by different names such as tama or tamma (among the serer, wolof and mandinga), gan gan or dun dun (among the yoruba), dondo (among the akan), lunna (among the dagbani), kalaugu (among the hausa), and doodo (among the songhai).

Entenga
The Entenga drums were part of a set of royal instruments of the Buganda Kingdom in Uganda. According to tradition the Tebandeke Mujambula, (1704 – 1724), the Baganda King loved the drums so much that he asked the drummers to play every morning at 3 am. He felt that the drums were so perfect, that this was the only time of the day when it was quiet enough to appreciate them fully. These drums have also been used to accompany traditional African religious activities like prayers, droughts, and removing evil spirits in the communities.

Mukanda
Among people of Kamba in Central Kenya, the mukanda is a double-membrane drum, covered at both ends, used to accompany the acrobatic dance wathi wa mukanda or mbeni, danced mainly by both boys and girls. The same drum, however, is known as mwase when used in the spirit-dance of the same name, played and danced mainly by women. 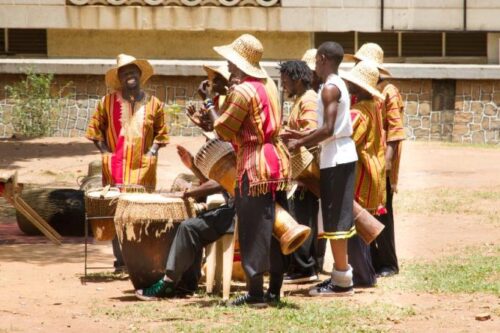 Kithembe originally referred to a cylindrical, leather honey-container, used as a drum in the religious dance, kilumi. Later the honey-container was abandoned and the drum, open at one side, which replaced it was given the same name. Nowadays the mukanda drum, is sometimes referred to as the ngoma/mwase/kithembe.
Though the drum has become a very popular musical instrument in Kenya, its historical background is unclear. The then president Kenyatta for example says that the Kikuyu borrowed the drum from the Kamba, the kehembe being known in Kikamba as kithembe.It also seems that the Luo drum ahangla, which resembles the Luhya sikuti drum both in design and playing technique, is an instance of borrowing.
A sikuti-like drum is indeed found in most of the Bantu linguistic communities of Kenya.
Drums in Kenya fall into the following categories: one-membrane; two-membrane; stool; pot; and friction. One might also classify these drums in terms of playing position. The player may sit astride the top of the drum as is the case of the kithembe – or hold the drum tightly between the legs and inclined forward – as in the case of the Giriama mshondo. If the drum is slung in front of the chest – as are those of the Mbeere or Chuka – or hung between the armpit and chest – as the sikuti is – the instrumentalist can dance while playing.
A third classification might be those which are beaten by hand and those beaten by a stick or sticks. Most African drums in Kenya are hand-beaten, allowing for more complex variations in rhythm and tonal colouring resulting from the intricate manipulation and alteration of the fingers, thumbs, and nails of the hands. 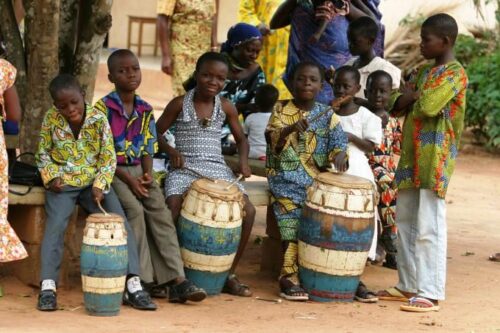 In the one-membrane drums, is the kithembe used in the mwase, kilumi and mbeni dances. The two-membrane drums is the Kamba mukanda, Giriama and Digo drums. The third category is the stool drum, though widely distributed in east and central Africa, is not popular in Kenya. It is found mainly along the coast up to Taitaland, and is played in sets of two to six drums by, e.g., the Bajun, Giriama and Digo in the ngoma za pepo to drive away evil spirits. Although these drums range from 7 inches to 2 and one-half feet in diameter, all are covered by a membrane of goatskin or cow hide. The largest are now made from petrol drums. Where traditions are still maintained, the smallest size drum, kumuuri, produces a steady rhythmic pattern which leads and controls the beat of the dance.

Ngoma
Ngoma (also called engoma or ng’oma or ingoma) are instruments used by certain Bantu populations of Africa. Ngoma gets its name from the Kongoword for ‘drum’. These drums are used in ceremonies in Central and South Africa, where the primary aim is to assist in healing during ceremonies. The rituals involve regular music and dance and can result in stress reduction, social support, and support of pro-social behaviours. Ngoma usually serves as a means to unite the tribe and help in health or life transitions. The ngoma drum is also used in Zimbabwe, mainly for traditional dances and celebrations. (Open Photo: Playing djembe drum. 123rf.com)