Afro-Maghrebian percussion, ngoni, chants and choreography, driven by infallible and colorful arrangements make it possible to create a rare and beautiful music. A perfect dialogue among Western, African and Oriental instruments.

Gabacho Maroc is one of the most popular music bands in present-day Mediterranean Africa, a land where the sun sets among the dunes, where the Arab culture encounters the Berber and Tuareg culture and Islam is the religion of the majority.
In those parts, the music of the majority is called Gnawa. It takes its name from the homonymous culture brought to those zones by black slaves from Sub-Saharan Africa. It is a culture marked by a strong mystical element incarnate in sound by hypnotic rhythms, especially adapted to accompany rites that are similar to those of animists where the border between spirituality and trance, syncretism and music-therapy is especially enfeebled. 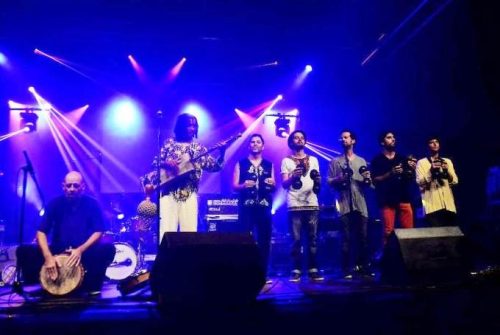 The sounds are strange but quite fascinating to western ears. The basic instrument is the santir (a plucked stringed instrument that comes between a double base and a guitar), and the vocal harmonies are often accompanied by hand-clapping.
The music is very popular in Morocco where many groups perform in the streets. It is also often found in Europe, especially in the urban centres of France where Magreb immigration is strongest.
Of the many groups that have moved abroad, one of the most creative and entertaining is the Gabacho Maroc group: eight Moroccan and Algerian musicians who have been based in France for some years and have performed more than 200 concerts in Asia and South America as well as in European countries. The Gabacho like to combine idioms and rhythms but also different stylistic schools, moving easily from ethnic rock to jazz and to the more traditional Gnawa music. 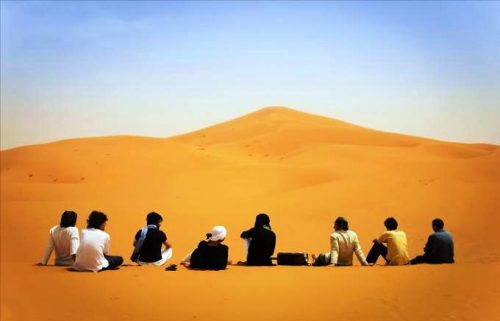 Their album of last year, issued to mark their fifth year together, has the meaningful title of Tawassol (in Arabic it means Berbers connection): a production that is cultural and refined, festive and popular. Not for nothing the specialised critics chose it as the best album of world music for 2018. It is the ripe fruit of the search for dialogue between schools of expression that uses the spiritual anxiety that pervades these cultures as a binding force. The response of the public regularly oscillates between amazement and overpowering enthusiasm; because, as Patrick Duval, the Director of Hauts de Garonne Festival stated: “Dialogue among Western, African and Oriental instruments has rarely been engaged so beautifully. Borrowing from world music, jazz, and traditional Gnawa music, their repertoire is variegated, festive and refined. This project, with endless horizons, helps to revive the concept of fusion”.
Franz Coriasco