A martial art that combines dance, self-defence and music, with its roots in ritual Bantu dances. In Brazil, it is the symbol of the fight against racism and social exclusion.

It is not just a way of fighting but an expression of cultural identity, in particular that of the African-Brazilians. Dancing, singing, oral culture and instruments such as the berimbau are associated with capoeira and this expresses one of the most powerful means of physical and spiritual resistance of the African-Brazilians against racism and social exclusion.
“A true capoeirista is not the one who simply knows how to move the body but the one who is moved by the soul”.
It was during the nineteen-forties that this was said by Mestre Pastinha. He founded the first Sports Centre of Capoeira Angola in 1941, in Pelourinho, Salvador Bahia. This was also the redemption of the very name of Capoeira; even after the abolition of slavery in Brazil (1888), the government saw it as a crime. Anyone practising the capoeira rodas was imprisoned and often beaten by the police. 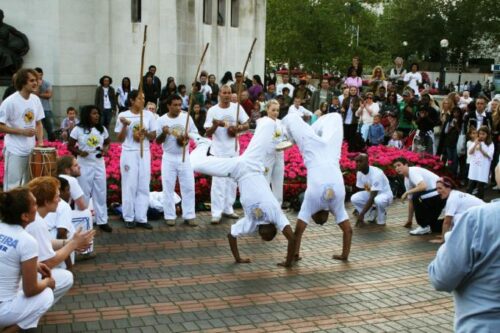 In 1932, persecution was less intense and the fighter Mestre Bimba opened the first Capoeira gym in Salvador. He included movements taken from other martial arts such as the batuque, developing one of the first systematic training methods, naming it Luta Regional Bahia.
It was in 1940 that the Capoeira finally emerged from the Brazilian penal code. Mestre Pastinha declared: “I practice the real Capoeira Angola and, in my school, they learn to be sincere and just.
This is the law of the Angola which I inherited from my grandfather. It is the rule of loyalty. I did not change the Capoeira Angola which I learned. It is not offensive. Capoeira waits. A good capoeirist must be able to sing and play all the instruments of Capoeira.” 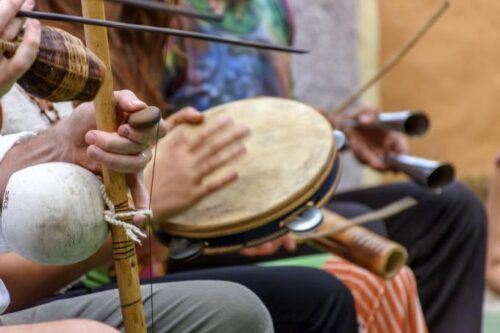 Capoeira is a mosaic, one of the fruits of the diaspora of the African peoples enslaved by the Portuguese. Mestre Pastinha was a member of Viva Bahia, the first para-folk group of Brazil, founded in Salvador in 1962 by Emília Biancardi, an ethnomusicologist and teacher. A tireless student of indigenous and African culture, she collected more than a thousand indigenous and African musical instruments which are today exhibited at the Centro de Referência Emília Biancardi (IPAC-SecultBA) of Solar Ferrão. Her father was a lawyer of African descent and her mother of Italian descent. As a convinced supporter of the importance of traditions as an element in the defence of one’s identity, she brought Capoeira on the scene. Moreover, to train her pupils, she gathered the best teachers in Salvador and Recôncavo, Baiano, and her excellence was also recognised by the writer Jorge Amado who affirmed: “Viva Bahia is a victorious accomplishment and worthy of support for its revealing work”.  Viva Bahia has performed in the United States, Russia, the Middle East, Africa and Europe and has contributed considerably to the internationalisation of Capoeira.

In the plantations
Capoeira was invented by Africans who began to be sold as slaves in Brazil at the start of the XVI century, to work in the sugar-cane plantations. To defend themselves against the capitães do mato (militiamen in the pay of the landowners to recapture runaway slaves), they performed defensive exercises. Since fighting was prohibited, they used song and dance to confuse their masters. 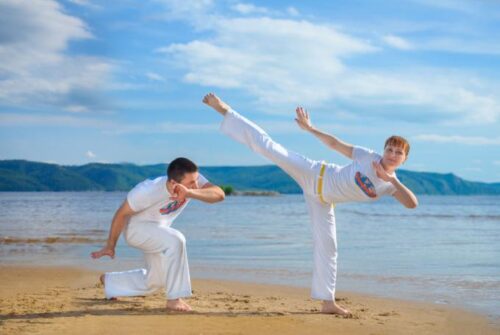 They combined ritual and martial dances whose roots are to be found mainly in the Bantu region of Congo-Angola. Up to the XVII century, it was essentially rural but developed in the cities in the XVIII century. King João VI (1767-1826) had as his bodyguard the capoeirista Joaquim Inácio da Costa Orelha, or Corta-Orelha. There are historical documents concerning Capoeira in Salvador, Rio de Janeiro, Recife and São Luis do Maranhão. José de Alencar, in his book Iracema, writes that the word originates from the Tupi language: caa-apuam-era (a deforested area). Others say it comes from the word capò (basket).

United Nations Heritage
In 2008, Capoeira was declared a cultural heritage, part of the formation of Brazil’s identity. In 2014, UNESCO declared it part of the intangible cultural heritage of humanity. Today it is still a means to becoming aware of the exploitation and racism present in Brazilian society. All of this was well expressed by the Mestre de Capoeira Moa do Katendê, a Baiano composer and dancer, who brought Capoeira to the world. Born Dique Pequeno in 1954, he was stabbed to death in Salvador in 2018, during presidential elections, simply for expressing his political opinion. 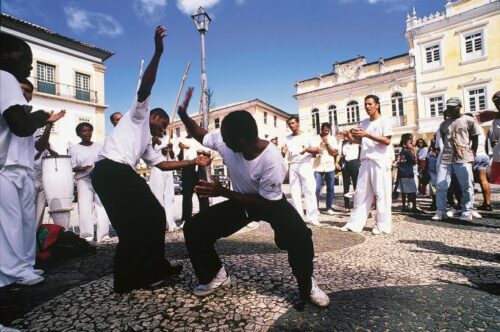 Mestre Moa said: “Capoeira is a story that starts from my life’s journey as an integral part of Viva Bahia, thanks to which I first went abroad.” He composed music for the Blocos-Afro that came to the fore on the artistic scene in Salvador with the Blocos do Afoxé, and he also founded the Badauê. “Moa was a performer known all over the world. His passing is an immense loss”, declared Antônio Carlos dos Santos, o Vovô do Ilê- Aiyê. Guellwaar Adún, a poet and Baiano editor of African descent, now living in the United States, remembers him: “Those who belong to the world of Capoeira know how much the people of African descent have suffered and know the inequality we must still face today. Moa do Katendê fought against all this with his art. He was one who sowed knowledge and culture. We will always continue to exist and to resist”.