It is a multipurpose medicinal plant and can be used, in particular, to treat pneumonia, asthma, arthritis, chronic ulcer, sore throat, and fever.  An essential oil is obtained from the leaves which is used for various purposes.

Steganotaenia araliacea (Family Apiaceae/Umbelliferae), commonly referred to as the carrot tree, is a small, aromatic, deciduous tree growing at an average of about 5 m in height. The bark is greenish, corky, peeling in papery strips, with all parts having a strong carrot smell. Leaves spiral on long-shoots or clustered at the tip of short-shoots, imparipinnate with 3-4 pairs of lateral leaflets. The leaflets are broadly lanceolate to almost round, margins are strongly dentate, with the teeth ending in a hair-like tip. The petiole is broadened at the base, clasping the stem. The flowers are small, greenish or yellowish, in terminal and lateral compound umbels, appearing before the new leaves. The fruits are in messy clusters, flattened, and heart-shaped. When crushed, the leaves have a carrot-like aroma hence the common name ‘Carrot tree’. The tree is harvested from the wild for local medicinal use and for other ethno uses. It is used in soil conservation schemes and also grown as a hedge. The plant is relatively widespread in Tropical Africa and is found in Mali, Cameroon and other regions of West Africa, Ethiopia, Somalia, and Eritrea in East Africa and in a variety of locations in Southern Africa. The use of traditional herbal remedies is encountered in both rural and urban areas, and this traditional medicine is one of the surest means to achieve total health care coverage for African’s population. As such, medicinal plants including Steganotaenia araliacea (which is regarded as a multipurpose medicinal plant) has been widely used in folklore.
In fact, Steganotaenia araliacea has been reported in the treatment of various ailments especially in tropical Africa and the savannah regions where it is mostly found, including treatment for pneumonia, asthma, arthritis, chronic ulcer, sore throat, fever, hypotensive, wound healing, as a diuretic agent, and other diseases of microbial origin. 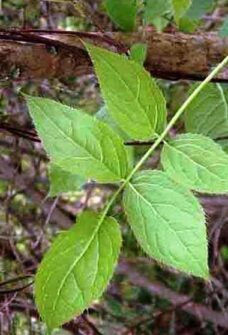 An infusion of the plant is strongly emetic. The scented leaves are used as vermifuge, as ophthalmic lotion, and as an anticonvulsant. The leaves decoction can be administered for the treatment of diarrhoea. The decoction obtained from the combination of the leaves and stem bark is used to treat sickle cell anaemia. The leaves and roots are used together for treatment of epilepsy. The roots and the bark decoction of Steganotaenia araliacea is used to cure sore throat.
The bark is chewed as a treatment for fever and is used in preparing a medication for heart complications. A decoction prepared by boiling the bark is added to milk and administered orally to adults as a remedy for stomachache and dysentery. The bark decoction is topically applied to treat scabies. The bark decoction is also known to be used as medicine for gas removal from the stomach (relief for stomach bloating).
The crushed tree trunk is reportedly used to deter snakes from the homestead surrounding. Twigs are used in dental care as toothbrushes.
The root decoction is used to treat a number of conditions including menstrual problems, abdominal pains, malaria, bilharzia, sore throat, swellings caused by allergies, heart palpitations and gonorrhea. The whole root as well as the root bark is used in the management of opportunistic infections due to Acquired Immunodeficiency Syndrome (AIDS) and treatment of theileriosis in some communities. Furthermore, the root bark is used for functional psychosis, treating snake bites, painful chest conditions, as well as a treatment for anasarca. 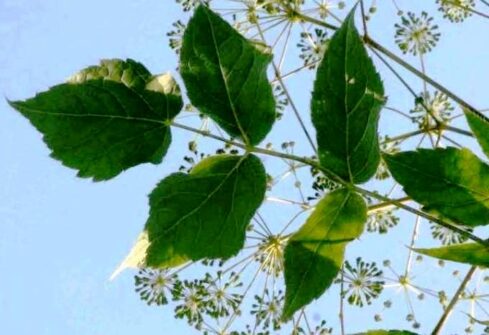 The leaves are rubbed on wounds as a general disinfectant. A decoction of the leaves is used in the management of diabetes mellitus in a number of communities.
In agroforestry, the Steganotaenia araliacea plant is sometimes grown as a hedge. It is considered to be an important species for use in soil conservation projects. The leaf litter enriches the surrounding soil. The tree casts a light shade and is often intercropped with banana, cacao, and coffee among others.
An essential oil is obtained from the leaves which is used for various purposes. The major components of the oil are limonene, beta-phellandrene, alpha-pinene, sabinene, beta-caryophyllene, and cryptone. The odorous leaves are used for scenting garments. The tree trunk is reported to have snake deterring activity. The twigs are used in dental care as toothbrushes. The white wood is soft and brittle. It is used in making farm tool handles and implements. Tree parts are used as fuel wood. (Open Photo: CC BY-SA .4.0/ © Hans Hillewaert)