At least 90% of African cultural heritage is currently outside the continent, mainly in European museums. But a recent campaign for the repatriation of African art is helping to make restitution of looted artefacts a reality and finally restore heritage to the African cultures that made them.

The debate about the return of valuable historical cultural artefacts that were smuggled out of the African continent during colonial rule is not new, but the discussion has increased over the last four years.  At the end of November 2017, in a speech delivered on a visit to the West African republic of Burkina Faso, French president Emmanuel Macron, addressing a large audience – mainly made up of students, promised to make the restitution of French-owned African heritage a priority over the following five years. France is estimated to hold at least 90,000 African artefacts in its museums and galleries, as many as 70,000 alone in the Quai Branly-Jacques Chirac Museum in Paris. Within a few months President Macron commissioned Senegalese economist Felwine Sarr and Parisian art historian Benedicte Savoy to prepare a report on the very sensitive issue of renditions of works of art to the countries of sub-Saharan Africa and how this goal should be accomplished. 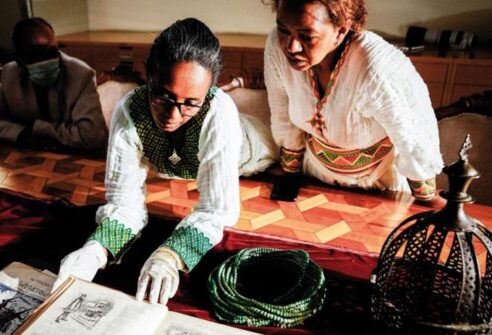 According to the authors of the report ‘All transfers of art, the building of the art market, inheritance, donations to museums – are based directly on immoral seizures and continuing exploitation’. Sarr and Savoy also point out in the report that Western museums have a highly disproportionate number of sub-Saharan African objects compared to collections left in Africa. The Sarr-Savoy Report sparked a heated public debate. Sarr and Savoy suggested that Macron return permanently and gradually the African artefacts: starting with the restitution of some 46,000 pieces looted until 1960, the beginning of the era of African independence. The authors of the report also suggested a reproduction of the returned works in order not to suddenly empty the French museums. The restitution modality outlined in the document provided for the signing of bilateral agreements between France and each requesting country.

Advances and more claims
The plan began to move forward. Senegal, a former French colony, signed agreements with Paris for the restitution of works that were looted during the colonial era. In November 2020, the French Senate approved the commitment to return two objects, which were exhibited at the Army Museum in Paris: the saber and scabbard belonging to El Hadj OumarTall, the 19th century Islamic leader and founder of the Tuculor Empire in West Africa. He was a key figure in the resistance against the French colonization. In 2021 another West African country, Benin, the former colonial Dahomey, also made a request for the restitution of part of the well-known Béhanzin Treasure, 26 relics, looted from the Royal Palaces of Abomey in 1892, which were held at the Musée du Quai Branly-Jacques Chirac. The restitution of artefacts to both African countries was supposed to be accomplished within one year from the signing of the agreements. 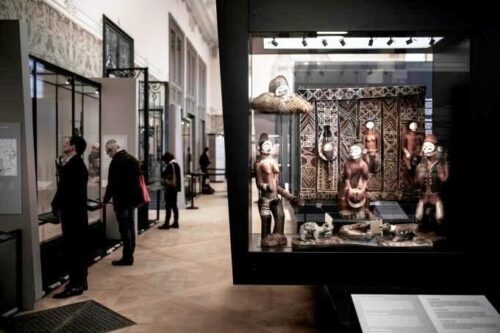 The Tervuren Museum in Belgium, on the outskirts of Brussels houses one of the largest collections of African artefacts in the world.

The official announcement of the return of the aforementioned Benin treasures was made at the end of October last year. Macron’s words and deeds encouraged other former French colonies in Africa to ask for the repatriation of looted artefacts. Chad has requested the restitution of some 10,000 objects.  Algeria, which was a French department and part of metropolitan France until its independence in 1962, also signed agreements with Paris for the restitution of looted works and, in October 2020, the Government of Paris announced the restitution to Algeria of a bronze cannon, of 12 tons, which was taken by the French in 1830, at the beginning of the colonial occupation. According to some information, the Macron administration was interested in trying to rebuild relations with a country with which France had been at war for almost a decade. This and the other examples show a profound revision of the French colonial role during the19th and 20th centuries.

Other countries
The request for the restitution of looted artefacts by former African colonies does not involve only France but also several other countries, since the Savoy-Sarr Report made it possible to update inventories and figures of artistic heritage held outside of Africa, such as those in the Tervuren Museum in Belgium, on the outskirts of Brussels, which houses one of the largest collections of African artefacts in the world. The museum, in fact, holds a collection of 180,000 African artefacts, while the Humboldt Forum in Berlin displays 75,000 African artefacts, the Quai Branly some 70,000, and the British Museum 69,000. Even museums in countries outside of Europe that did not colonize Africa, such as Russia and the US house African looted artefacts. 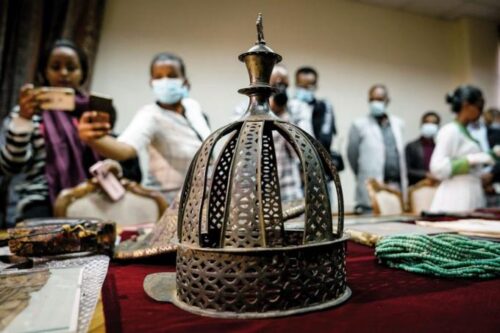 The French example has been followed by other countries. European museums have long been reluctant to restitute African heritage objects but now they are under mounting pressure to return the irreplaceable artefacts plundered during colonial times. Ethiopia has urged the return of some 3,000 pieces. Some objects, such as a bible and several crosses, among others, seized in 1868 by British troops, were returned last September. Much earlier, in 2005, the famous obelisk of Aksum, taken away from Ethiopia in 1937, during the occupation by fascist Italy, was repatriated.
Angola also joined the list of requesting countries, urging Portugal to return several artefacts. Portugal committed itself to helping to return its former colonies not only the African artefacts held in the Portuguese museums but also other objects housed outside the country: in the USA, Germany, France or Brazil. The Portuguese initiative sparked a new debate. This year, Germany, whose colonial empire did not survive the First World War, has proposed the return of hundreds of cultural artefacts that were smuggled out of Nigeria in 1897 by British troops, and which are currently held in German museums, the famous ‘Benin bronzes’, one of the most valuable among African art collections.
In May 2019, following the 2017 request of Namibia, Germany announced it would restitute a centuries-old stone cross. The limestone cross bearing the Portuguese coat-of-arms was erected in 1486 on the coast of today’s Namibia to assert the country’s territorial claim. It was taken to Germany in 1893 when the area was part of the German colonial empire, and it was held in the German Historical Museum in Berlin.
At the end of October 2021, the University of Cambridge returned a looted bronze rooster to Nigeria. The statue, known as Okukur, was looted by British colonial forces in 1897. Cambridge University was the first British institution to return African cultural pieces; the initiative marked a very valuable precedent. 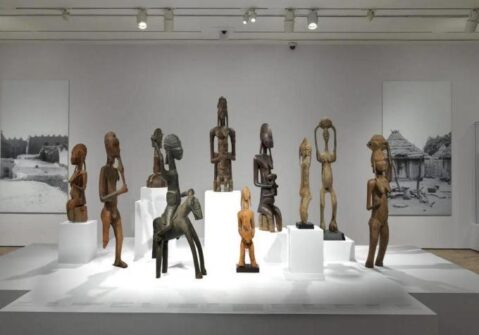 The Metropolitan Museum of Art in New York City.

In June 2021, the Met, New York’s Metropolitan Museum of Art, announced it would return three works of art that were looted in the 19th century from Nigeria. The two 16th-century brass plaques and a 14th-century brass head from the Kingdom of Benin — part of modern-day Nigeria — were taken from the Nigerian Royal Palace during British military occupation in 1897, and moved to the British Museum in London until 1950 when the UK repatriated them. After their return to the National Museum in Lagos, they re-entered the art market and ended up in the hands of a private investor who donated them to the MET in 1991, where they were exhibited for years.
At the end of November 2020, the Netherlands returned a 600-year-old terracotta to the Nigerian Government. The terracotta was smuggled through Ghana in 2019 to Holland. In November 2020, it was officially announced that a new museum would be built in Benin City, Nigeria. The museum is intended as a place for the most comprehensive display in the world of Benin bronzes, including the collection to which the aforementioned bronze rooster belongs. The Benin bronzes were looted by British soldiers and sailors in 1897 and are mostly in western museums and private collections. The British Museum has more than 900 bronzes and has long faced calls for them to be returned. Details have been announced of important steps towards these treasures being loaned or given back with the creation of the EDO Museum of West African Art in Benin City.

Doubts
There are also arguments against the repatriation of African stolen art, many of which appear to suffer from a ‘colonialist mindset’. One of the most patronizing arguments used by supporters to defend museums’ rights to keep such artefacts is that, due to lack of resources and infrastructures, there are not the minimum conditions for the preservation of cultural heritage in many African states. Another argument is: if colonial powers had not taken these objects, they would have been destroyed in the conflicts and disasters that subsequently erupted in several African regions. And since these institutions preserved them, they have the right to keep them. This is a simplistic and distorted way to tackle the issue of the African reality. However, the two examples cited of Dakar and Kinshasa are an antidote to these pessimistic objections. 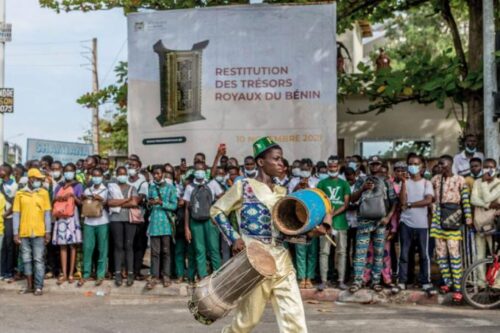 However, there are institutions that are reluctant to the restitution and/or loan of looted African artefacts, such as the British Museum. They insist on the fact that the artefacts legitimately belong to their current owners, since many of the goods were acquired through legal means, so there would not be sufficient reasons to restitute them. Another argument against repatriation is that the issue should be tackled from a global perspective. Besides African art, the process of restitution of stolen art would force a complete review of universal history, which documents multiple examples of illegal appropriation and looting of cultural pieces in many regions of the planet. However, the restitution of African art is an essential step towards the recovery of historicity and subjugated dignity. Repatriation of stolen art is also a tool for improving relations between African countries and their old metropolises and other countries. That is why the process should be accelerated, since much still remains to be returned. (Open Photo. The Rosetta Stone is one of the most famous objects in the British Museum).