The Azerbaijan art of weaving is unique: it is an ancient tradition, a mystical and pedagogical language and a sign of Azeri identity that has now become the Heritage of Humanity.

In Lahij, on the mountains of Azerbaijan, four generations come together around the loom on which carpets are woven. The woman doing the weaving learned the art when she was just five years old. The loom on which she made her debut was on the carpet her mother received as her dowry and woven by her grandmother. The daughter of this woman comes to see her and sits down at the loom to demonstrate and also perfect her weaving skills.
Carpet weaving in Azerbaijan is mostly done by the woman of the house but some men also weave. During the winter, the women of the extended family get together and each one does her creative part of the work. On such occasions, girls and boys learn from the mothers and grandmothers and the wives help their mothers-in-law.
Being handed down from one generation to the next, the traditional art of carpet-weaving has a history going back about four thousand years. The earliest traces are from the second millennium before Christ. 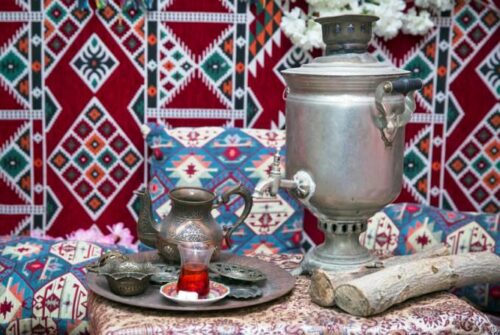 The Arab historian Al Mugaddasi, wrote in the X century BC: ‘Your carpets are unequalled anywhere else in the world’. In the V century BC, the Greek Herodotus, known as the father of history, refers to the advanced colouring techniques of the Azerbaijanis.
Travellers to the ancient Middle East and Asia, like Almaçudi and Xuan Tes Ank, and the Italian explorer Marco Polo, in the XIII century, recorded Azerbaijani weaving techniques; cloth and carpets were made and sold in the Azeri markets that were not to be found anywhere else in the world.
Azerbaijan carpets have been part of European art since the late Middle Ages. They are to be seen in works such as the Annunciation with St Emidius (1486), by Carlo Crivelli, the Virgin and Child (1487), by Hans Memling, or The Ambassadors (1533), by Hans Holbein the Younger.

Mystical and educational carpets
Azerbaijan is located on the old Silk Road that joined Europe and Asia and has always been a crossroads of civilisations, cultures and religions.
The cities of Azerbaijan were known as centres of commerce, science and culture. While the products of the soil – such as nuts, salt, saffron, sturgeon and caviar – were much sought-after by foreign merchants, the same was true of their artisan products, such as vessels in wood, non-ferrous metals and, in particular, natural colourings. The products of these arts were in great demand: raw silk, silk fabrics, cotton, multi-coloured ceramics, arms and other metal objects, precious stones, jewels and especially carpets that were sold by weight like precious metals. 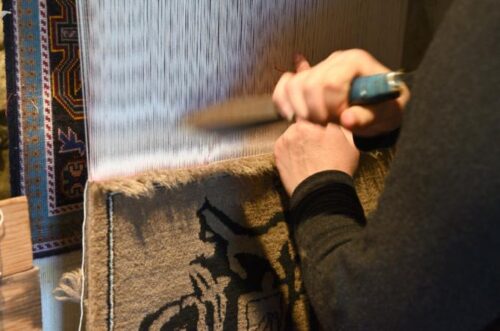 This is because Azerbaijan weaving is much more than the simple provision of useful objects; it is a kind of visual language, all the elements of which have a meaning.
The experience and world vision of the Azeri are inseparable from the art of weaving to such an extent that Azeri men and women weavers may be classified as mystics and educators.
Azeri weaving incorporates the spiritual, social, cultural and artistic values of the country in each period of its history. This life wisdom is present and is transmitted in everyday life. Carpets cover all areas of the house: the floor, the walls and the ceilings. There is even an Azeri saying that goes: xalças harada, yurdum orada, meaning ‘where my carpet is, there is my home’. Special carpets are woven to depict various occasions: prayer, wedding ceremonies, births or mourning rituals. The arrival of a distinguished person is marked by laying down a carpet. In the world of fashion and entertainment, the first rows are covered with most beautiful carpets.

Symbol of Azeri identity
The ancient art of carpet weaving has become a tangible symbol of Azeri culture in which two aspects stand out: multiculturalism and innovation. Each of the ten regions of Azerbaijan has its own weaving techniques and elements of local designs. Aware of this richness and to use it to the best advantage, in the workshops of Azerkalcha, local artisans manage about five hundred works being produced nation-wide and, in this way, it is easily possible to acquire a view of the whole country. 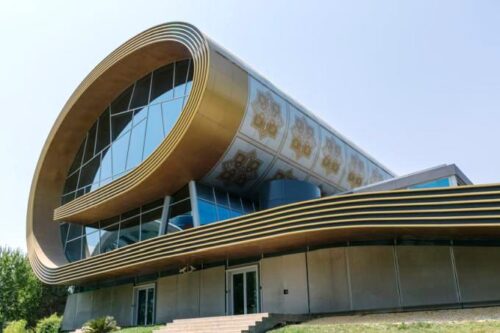 Techniques of preceding centuries are traditionally used by the artisans of today but new technologies make it possible to explore other designs. One of the artists of this new generation of weavers is Faig Ahmed. Since childhood, he wanted to cut up a family carpet to rearrange its design. Today he dares to innovate at the point of contact between the old and the new and create carpets with deformed sections.
The symbolic element that unites the spiritual with daily life in Azeri carpets is fire. It is represented by more than ninety tones and configurations. A classical motif consists of mixed lines in the form of an S that spread out horizontally and vertically to create a stylised image of a dragon which is also a symbol of fire.
Fire indicates Azeri identity since the country has abundant reserves of natural gas and oil. It is easy to identify them by the flames on the surface, something that is seen when the gas comes into contact with the atmosphere and ignites.

A world heritage
The National Carpet Museum of Azerbaijan, in Baku, was opened in 1967. It looks like a rolled-up carpet pointing to the future. In it, the patrimony of ancient skills acts as a spur to innovation and ancient traditions appear genuine for today. Designed by Austrian Franz Janz, it is an architectural jewel. In 2010, UNESCO added Azerbaijani carpet weaving to the Intangible Cultural Heritage List. Since then, the practice has attracted the attention of international tourists and consumes and renews the passion of local artisans, guaranteeing further generations of weavers.