On a hill between Tel Aviv and Jerusalem stands a village that is an oasis of peace. Its dual name Nevé Shalom – Wahat al-Salam respects the two communities that live there, one Hebrew and one Arabic, in a land where peace has been wanting for more than seventy years.

The name Nevé Shalom– Wahat al-Sa-lam is a bilingual expression meaning ‘Oasis of Peace’ and signifies a dream that has existed since 1974. It is a village founded by the Dominican priest Father Bruno Hussar, a Catholic convert from Judaism and an Israeli citizen. His idea was to ask Jewish and Arabic families to live together in the same place and so create a single community. For 47 years, the village of Nevé Shalom– Wahat al-Salam shows the whole world that Jews and Arabs can live together respecting and understanding each other and seeing others as an enrichment and not as a danger – and to do this in a society where Israeli-Palestinian conflict has lasted for more than seventy years and where hatred has caused people to question deeply the idea of a village where different people live together on a daily basis.
This is demonstrated by the various acts of vandalism perpetrated each year against Nevé Shalom – Wahat al-Salam. Despite all this,
the experience goes on. 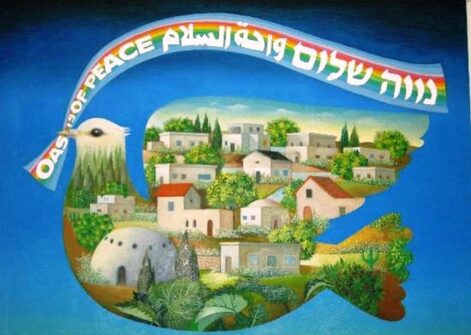 The aims of Nevé Shalom– Wahat al-Salam are to face up to the complexity of the different situations, to break down divisions and stereotypes, to focus upon the relationship between power and prejudices, to become aware that each person has a role in the construction of a more just society and fraternity, where each person has their place and their role. There are tens of thousands of young people who have been involved in the School for Peace as well as the adults who have learned in this place how to manage situations of conflict and are now active in organisations involved in resolving the conflict.
Nevé Shalom– Wahat al-Salam wishes to be an experience of resilience where people are continually starting over again in the face of difficulties. Its strength derives from the relevance of a message that has its roots in the founder, Father Bruno Hussar, who used to say he had four identities since he was a Catholic priest, a Jew, an Israeli citizen who was born in Egypt and lived there until he was eighteen. Furthermore, Fr. Hussar held four citizenships during his lifetime: Hungarian, Italian, French and Israeli, as well as having been born in Cairo into a Jewish family that was well integrated into the Arabic world.
While in France studying engineering at university, Hussar met the figure of Jesus and in 1935 was baptised after a troubled journey. He would have like to embrace the priesthood but decided to postpone matters since he had to look after his mother and siblings. In 1945, he joined the Dominican Order, changing his name from André to Bruno. 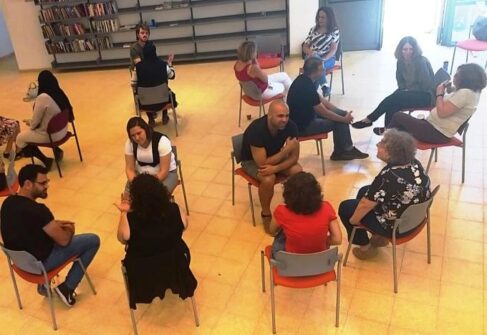 He was sent to Israel charged with founding a Catholic centre for Hebrew studies. Once he had arrived in Israel, Fr. Hussar began to understand more and more the importance of his Jewish roots and his feeling of belonging to the Jewish people. He studied the Hebrew language and history including the attitude of the Church towards the Jews. He became increasingly convinced of the need to bring about a change in the teaching of the Church and the position and attitude of Christians towards Jews. In his early years, Father Hussar met other formerly Jewish Christians and some Christians who agreed with his views. In 1955, the Work of Saint James was founded for the purpose of deepening the encounter with the Jews. But Fr. Hussar felt it was not enough. He says: “There is the main conflict between Jews and Arabs…then there are countless other conflicts between Jews and Christians, Muslim Arabs and Christian Arabs, between Jews and Jews […]. They never see the faces of the others and they are not interested in seeing them”. Since it would have been impossible to deal with all conflicts, Fr. Hussar confined his attention to the two peoples that within the state of Israel confronted each other as enemies, and started to dream of a village called ‘Nevé Shalom – Wahat as-Salam (Oasis of Peace)’ where Jews and Palestinian Arabs can live together in equality, peace, collaboration and friendship. And so it was that, in 1974, the experience of the village of Nevé Shalom– Wahat al-Salam came into being. 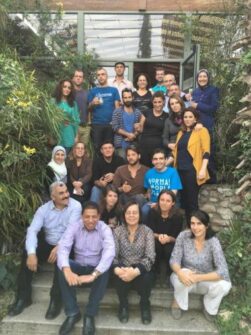 The key to the experience of Nevé Shalom– Wahat al-Salam is dialogue. It is lived out daily between neighbours whether Jews or Arabs and also in the primary school attended by children who do not live in the village but in the surrounding areas: the educational system there is the only one in Israel where teaching is done in both Hebrew and Arabic. It is marked by the continual and spontaneous encounter between the children of the two peoples and guarantees reciprocal knowledge and respect as well as respect for the culture and traditions of the others. But dialogue also involves religious identity since the Arabs living in the village are partly Christian and partly Muslim. 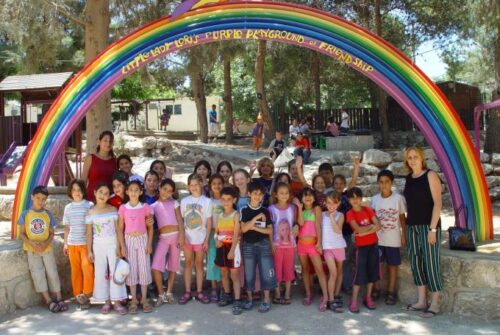 On the hill the village is built on, there are no buildings for worship: the families practise their faith outside the village. However, a House of Silence (Bet Dumiain in Hebrew and Bet as-Sakina in Arabic): it is an architecturally very simple structure dedicated to reflection, meditation and prayer. It is neither a mosque nor a synagogue nor a church but a large, white-painted sphere with a simple entrance.  Within it there are no religious symbols denoting one creed more than another: there is just a rock in the middle with an olive branch – a universal sign of peace – a lighted candle and some mats and stools. The House of Silence is dedicated to all faiths, a sign that unites in a land where religions divide people. Despite everything, the dream goes on.