A great opportunity to rediscover the reasons for a presence. A multicultural community. Dialogue with Islam. Speaking with the new Catholic Latin Rite Bishop Mons. Claudio Lurati.

The Catholic Church in Egypt is very small numerically: 300,000 members out of a population of 100 million inhabitants the majority of whom are Muslims. A characteristic of the Church is that it includes communities of seven different rites: Coptic (the largest), Latin, Armenian, Maronite, Syro-Catholic, Chaldean and Greek-Melkite. 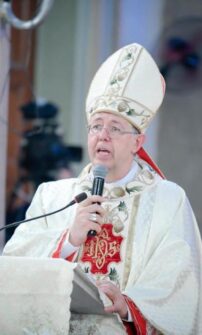 “Being such a small community in a country deeply marked by a Muslim presence is a great opportunity to rediscover the reasons for a presence that does not depend on numbers or its works, important though they may be” says Mons. Lurati. “We find the reasons for our presence in the person of Jesus whom we are called to witness to by our lives, marvelling at seeing our witness reaching the most improbable people and places and at the way meaningful relations are built up along with endless possibilities of walking together even with those who are different from us”.
The newly-appointed bishop continues: “The Catholic Church, which is not only Latin, is a reality that impresses by its inter-nationality. It is composed of people from all over the world. Its inter-nationality gives it a unique profile which must be put to good use. While in every Christian situation the challenge is to live unity in multiplicity, for us this is especially required. It is also the most powerful instrument for testimony we have at hand”.

The first school of catechesis
The evangelisation of Egypt originated in the preaching of St Mark the Evangelist, precisely in Alexandria in Egypt. Christianity spread rapidly. In Alexandria, which had become the See and second only to Rome in importance, was founded what was considered the first School of Catechesis of Christianity in the II century. Its teachers included: Athenagoras, Clement, Dydimus, Origen and such illustrious visitors as St Jerome. In the IV century, monasticism began to spread. 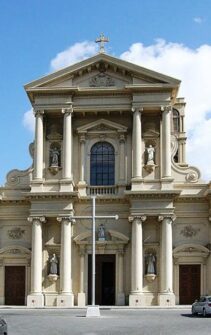 Alexandria. The cathedral of Saint Catherine.

In the V century, the Coptic Church (Coptic means Egyptian), together with other Eastern Churches of the Latin and Greek Church, separated, rejecting the conclusion of the Council of Chalcedon convoked in 451, in which monophysitism, the heretical Eutychian doctrine which recognised in Jesus a single, divine nature, denying his human nature, was condemned. The coming of the Arabs saw Egypt subjected to a progressive process of Arabisation and Islamisation which, starting in the IX century, made Christians a persecuted minority, though always very much present. From the XIII century, the pastoral care of European Catholics who had settled in the country was entrusted to the Friars Minor in the Holy Land.
It was not until 1839 that the Apostolic Vicariate of Egypt was erected, subject directly to the Holy See. In 1951, it assumed the title of Alexandria of Egypt and, on 30 November 1987, the Apostolic Vicariates of Heliopolis in Egypt and Port Said were added to it.

A sense of respect

Mons. Claudio Lurati, 58, is Italian and belongs to the congregation of the Comboni Missionaries. On 30 October last, he was consecrated bishop of the Catholic Latin community in Egypt. The Latin Church has around 70,000 members. The Apostolic Vicariate has jurisdiction over the faithful of the Latin Rite in all of Egypt. The seat of the Vicariate is the city of Alexandria, where the cathedral of Saint Catherine is located. The Vicariate has 30 parishes in all of Egypt, 167 priests and religious men, and 250 religious women.
He says that the Catholic Church in Egypt, with its involvement in education and charitable works, enjoys respect and prestige. “The Church has founded a number of schools – highly regarded for their educational standards and in which 50% of the students may be Muslim – and charitable works such as dispensaries, medical centres and initiatives for the training of women and assisting immigrants and refugees, mostly from Sudan and Eritrea”.
There is, of course, in Egypt, a powerful presence of the Orthodox Coptic Church. “The Coptic Church has great riches to be shared and we are especially attentive to it, though we may find this difficult since it mostly uses the Arab language. As in the past, there is a high degree of collaboration socially, in public health and education. We celebrate Easter following the Orthodox calendar, with a few exceptions. It would certainly be good to reach agreement on this among all the Christian communities of the world”. 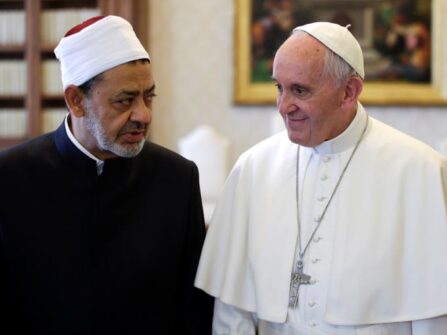 Egypt is increasingly becoming central to the Catholic Church regarding relations with the World of Islam. In his recent encyclical Brothers All, Pope Francis makes explicit reference to the Sheikh of al-Azhar. “In recent years, the highest Islamic religious authority in Egypt, the Grand Imam of al-Azhar, Ahmad al-Tayyib, has shown himself to be one of the more active partners in dialogue with the Catholic Church, so much so that he signed the document of Human Brotherhood in Abu Dhabi in February 2019 and is quoted in the Encyclical, with some opinions almost shared, as if they had been written perhaps by two authors rather than one. Come to think of it, this is staggering”, Mons. Lurati says.
The bishop continues: “There is also the historical legacy of the visit of St Francis to the Sultan. That visit has hardly left a trace among Muslim historians of the time but, in the memory of the Christian West, it remains a great gesture of approach, an unarmed and free encounter. After that experience, St Francis wrote his Unstamped Rule and instructed his friars to “go among the Saracens, to be “subject to all human creatures for love of God”. Here there is also a lesson for us living as a minority in a Muslim country, and so formed for a religion that is different from ours. Being here as a minority and obedient to that world, allows us to come to know it since obedience is the path to knowledge”. 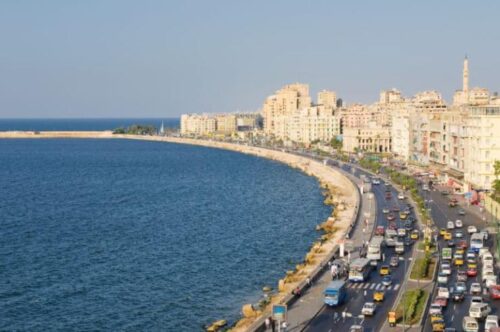 Egypt is a country that is experiencing economic and political tensions. “What immediately meets the eye is an enormous ferment, a commitment to creating infrastructure. Changes are also under way in the centre of gravity of Egyptian social life. A new capital is being built about 30-40 km from Cairo. We do not make political statements but we must be attentive to the situation to keep up to date. I may add that, during this period, the Christians, after the dangers posed by the Muslim Brotherhood, are breathing a sigh of relief. We need to keep in mind that, in 2013, after the fall of the Muslim Brotherhood, about 250 Christian structures were attacked such as churches, schools, etc. For the next four years, there were many very painful terrorist attacks against Christians and others. It seems to me that things are more
under control at present.
The episcopal motto of Mons. Lurati is ‘Quaerite Primum Regnum Dei’– ‘Seek first the Kingdom of God’.  “It is both the fruit of experience and an aspiration. In my religious and priestly life, I have always done what I was asked and, on the few occasions when I had other things in mind, things turned out differently. However, to have the Kingdom of God as one’s first horizon has made me more free and rendered more gratuitous and abundant what came afterwards. I hope this attitude will continue to inspire me and place me ever more at the service of this Church”.