In theory, there has always been ‘harmony’, that is, close collaboration between church and state in Russia. In reality, everything was more complex.

When Patriarch Hadrian died in 1700, Tsar Peter the Great prevented the appointment of his successor: two centuries passed before, following the abdication of Nicholas II, in the summer of 1917 the Moscow Council elected Patriarch Tikhon. But in October of that year, the Soviet Revolution brought Lenin to power, who wanted to scale back the Russian Church, even with violence.
When, in 1925, the patriarch died, Stalin – then in power – prevented the appointment of a successor. In the years 1932-33, the Kremlin would starve millions of people to punish the peasants who refused to give the government the established amount of grain: the Ukrainians call this tragedy Holodomor.
Let’s go back to the USSR, invaded in 1941 by Hitler’s armies. Stalin gradually realized that they could destroy the country; and so, to the few metropolitans alive (many bishops had been killed or imprisoned) he asked to make an appeal to the Orthodox faithful to take sides with the Red Army against the Germans and believers did so.
Then, as a reward, in 1943 Stalin allowed the appointment of the new patriarch. Since then, the succession of leaders of the Russian Church recommenced, down to the present day. 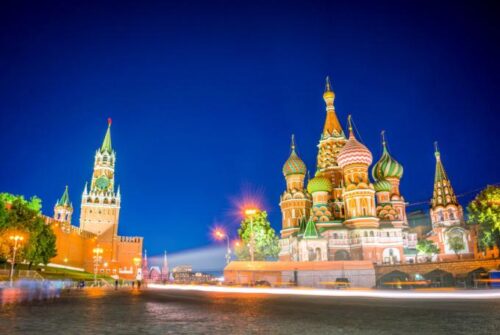 After the war, the Soviet regime continued, however, to keep the Church subjugated. Only in the years of Mikhail Gorbachev did things begin to change; in 1988 he helped the patriarchate to organize the solemn celebration of the ‘Thousand Years of the Baptism of Russia’.
The USSR collapsed in 1991 and, in the new Russia, first Yeltsyn, and then Putin granted many favours to the patriarchate, also to compensate it, in some way, for the immense damage – dozens of bishops, hundreds of priests and thousands and thousands of Orthodox faithful killed, many churches destroyed, and many monasteries requisitioned – caused to the Russian Church in 75 years of Soviet rule. Against this background, we must consider the statements of Kirill, elected in 2009, on Putin’s unfortunate war against Ukraine.

Kirill on one side, Onufry and Jean (Francia) on the other
The Patriarch of Moscow essentially supported the invasion of Ukraine. He made Putin’s thesis his own: in the Donbass – an area mostly inhabited by Russians and Russian speakers – the Ukrainian extremists, manipulated by the Ukrainian government, dominated at the expense of the rights of that minority in Ukraine (but the majority in Donbass), even committing execrable acts (Kiev, however, rejects the accusation). All this happened without the West ever raising its voice. Zelensky denied this thesis; the Russian president reiterated it, and Kirill agreed with him. 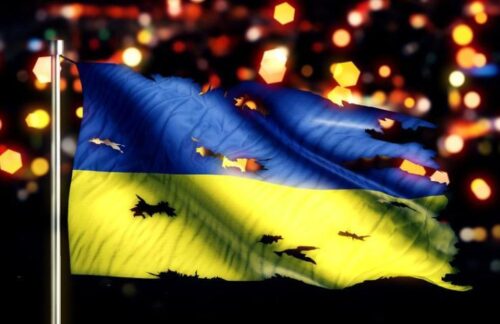 This explains the tone of the message that Kirill addressed to his entire Church on February 24, the day of the beginning, for Putin, not of a ‘war’, but only of a ‘special military operation in Ukraine’: “It is with deep sorrow in the heart that I feel the sufferings of the people, caused by the events that are happening. As Patriarch of all Russia, and primate of the Church whose flock is found in Russia, Ukraine and several other countries, I feel deep compassion for all who have been affected by misfortune. I urge all parties to the conflict to do everything possible to avoid civilian casualties”.
The tone of an appeal launched that day by Onufry, the primate of the UOC, albeit linked to the Russian patriarchate, was quite different: “Defending the sovereignty and integrity of Ukraine, we turn to the president of Russia and ask him to immediately cease the fratricidal war. The Ukrainian and Russian peoples arose from the baptismal fonts of the Dnieper and the war between these two peoples is the repetition of the sin of Cain, who killed his brother out of jealousy. Such a war finds no justification either before God or before men”. 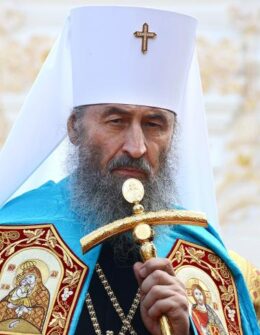 The Metropolitan of Kiev and All Ukraine, Onufry (Berezovsky). CC BY-SA 4.0/ Vadim Chuprina.

The problem, for Kirill and Putin, is that Onufry is not alone. Indeed, on Sunday 6 March several metropolitans of the COU – such as Eulogius of Sumy, Theodore of Mukachevo, Filarete of Leopoli and four or five others – ‘ignored’ the name of Kirill in the ‘divine liturgy’ (the Mass). To evaluate this silence, it is necessary to know that, in Orthodoxy, when the bishop celebrates the Eucharist, the name of the patriarch with whom he is in communion is always solemnly remembered: to skip it, in itself, is a schismatic choice.
But several parish priests of the COU, in addition to imitating these bishops, have gone further: they asked Onufry to convene a council (which provides, in addition to the bishops, also the presence of representatives of the parish priests, monks and faithful) to proclaim the autocephaly of the Ukrainian Church. But there already is an autocephalous Church: would the new one join it, or would it join the CAOU? And would it place itself under Constantinople, detaching itself from Moscow, perhaps waiting for the Russian patriarchate to radically change its position on the war in Ukraine?
Even stronger signs of extreme unease have come from within Russia, and from the Russian Orthodox living in Europe. About 240 Russian popes and deacons, at home, in early March, after describing the ongoing war as ‘fratricidal’, added: ‘We weep at the ordeal to which our brothers and sisters in Ukraine have been undeservedly subjected’. 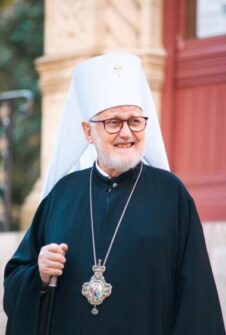 But the harshest judgment came from Metropolitan Jean of Dubna, archbishop of the Orthodox Churches of Russian tradition in Western Europe, who on March 9 wrote to Kirill from Paris: ‘On behalf of all of our faithful I turn to Your Holiness that you may raise your voice, as Primate of the Russian Orthodox Church, against a monstrous and senseless war, and intercede with the authorities of the Russian Federation so that, as soon as possible, there may be an end to this deadly conflict which until recently seemed impossible between two nations and two peoples united by centuries of history and their common faith in Christ’. Jean also disagreed with the anti-gay affirmations made three days earlier by Kirill, who took it out on Gay Pride that wants to morally legitimize the practice of homosexuality, prohibited – he underlined – by the law of God: “Your Holiness, in your homily on Sunday of Forgiveness, delivered on March 6 in the patriarchal cathedral of Christ the Savior, you suggest that you justify this cruel and deadly war of aggression [against Ukraine] as ‘a metaphysical fight’ in the name ‘of the right to stay on the side of the light, on the side of God’s truth, of what the light of Christ and His Gospel reveals to us’. With all the respect that is due to you, I must tell you that I cannot subscribe to such a reading of the Gospel”.

Where will Orthodoxy go from here?
Already shattered, in fact, into three sections due to the Ukrainian autocephaly affair (pro-Constantinople: the patriarchate of Alexandria, the Church of Greece, that of Cyprus and the CAOU; pro-Moscow the patriarchate of Antioch and the Polish Church; other neutral churches such as the Romanian Church), Orthodoxy will now be shaken by the earth tremors of the war in Ukraine, and consequently will have to pass judgment on Kirill (Bartholomew immediately launched an appeal, condemning the invasion). 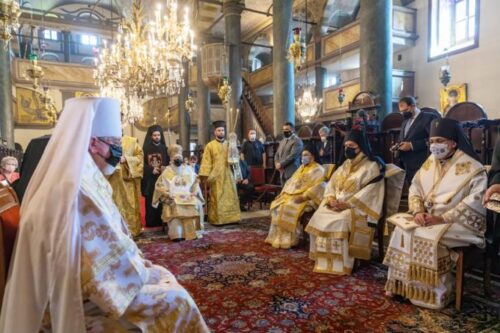 Festive Liturgy on the Day of the Holy Trinity led by Ecumenical Patriarch Bartholomew in the Church of St. George in Istanbul. ©palinchak/123RF.COM

The spokesman of Daniel, Patriarch of Romania, with transparent reference to Kirill, but without ever naming him, spoke thus: “The true Christian distinguishes between an authentic and worthy primate of the Church of Christ, and a primate who is, from the moral and Christian points of view, dishonoured by cynical complicity with the most hateful things that man without God is capable of doing: the war of conquest, terror, torture and the killing of masses of people”. Will the explosion of Orthodoxy, therefore, be one of the ‘side effects’ of Putin’s war against Ukraine? (Open Photo: Russian President Vladimir Putin and Patriarch Kirill, head of the Russian Orthodox Church. Photo Sputnik)