The country’s solar and wind huge potential coinciding with Europe’s need to diversify its energy mix away from fossil fuels provides large opportunities which are beginning to materialize with a first large hydrogen project.

As the EU aims at decarbonising its economy and reduce its dependence from Russian oil and gas, it is turning towards sources of clean energy.  On the 3 May, at the European Parliament, the spokesman for the European People’s Party on Energy, Christian Ehler stated that “Energy independence has become an absolute priority”. In order to achieve this goal, it is necessary to “accelerate the roll-out of hydrogen and renewables to ease off dependence on Russia”, he said.
The hydrogen potential is promising. Indeed, hydrogen makes it possible to obtain energy without carbon emissions, either through its direct combustion with oxygen or in the form of electricity via a fuel cell. It may be used to decarbonise sectors which are hard to electrify, such as steel and cement plants and has applications in the transport sector. 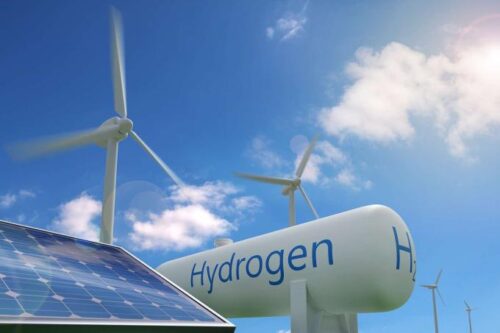 According to World Platinum Investment Council estimates, the sector will be worth U.S. $ 2.5 trillion by 2050. Japan alone is planning to import up to 800,000 tonnes of hydrogen annually from 2030. Global volumes could reach 800 million tons by 2050. Potential suppliers such as Chile, Australia, Saudi Arabia are already moving to meet the demand.The EU plans to import 10 million tonnes of green hydrogen by 2030. to replace fossil fuels in the industry and transport sectors. According to the World Energy Council, the EU demand could even reach 60 million tons by 2050. The European Investment Bank has already EUR 1 billion investments in the pipeline to finance hydrogen projects.
For the trade association Hydrogen Europe, the EU cannot produce all this hydrogen domestically, because it doesn’t have enough sun or wind. Hydrogen Europe considers Africa as its prime partner.
Already, countries like Kenya, Nigeria and South Africa are developing green hydrogen plans. Namibia is the more advanced. The country is endowed with huge clean energy potential, and it is one of the best prepared for hydrogen production. 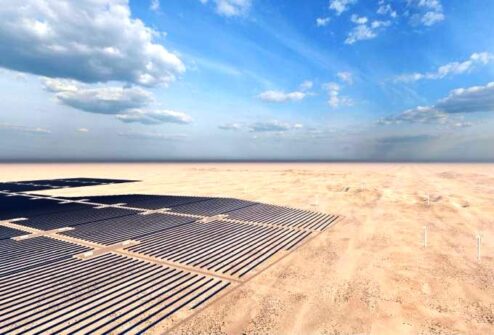 Namibia is uniquely positioned to be one of the largest green hydrogen producers globally.

According to the World Bank, Namibia boasts from a huge 720 GW wind power capacity and could export ammonia at competitive prices. According to German government experts, Namibia should offer competitive prices that would place the country among high-potential green hydrogen producers and exporters. In addition, the country has large reserves of platinum and iridium, two metals used to separate hydrogen from water.
By the end of the decade, Namibia could become an exporter of green hydrogen from both wind and solar power, said James Mnyupe, economic adviser to the Namibian presidency, to participants at the “World Hydrogen Summit” in Rotterdam, in May 2022.
Namibia enjoys indeed over 3,500 hours of sunshine per annum and high wind speeds. Accordingly, the power of giant solar farms can be used to make hydrogen, which can be used for fuel or converted into ammonia to make fertiliser. In order to produce hydrogen, Namibia would use desalinated sea water which would be split into hydrogen and oxygen, by electrolysis. Then, the hydrogen would be piped to a terminal and exported to Rotterdam, Germany or South Africa”.
The solar potential could be developed soon, following the signature in 2021 of a Memorandum of intent (MOI) by the U.S. government to build a 5 GW solar power complex in Botswana and Namibia, with the support of the African Development Bank and of the World Bank Group. This scheme which is part USAID’s Power Africa Initiative could be one of the largest solar power complexes in the world, using both solar photovoltaic and concentrated solar power technologies. 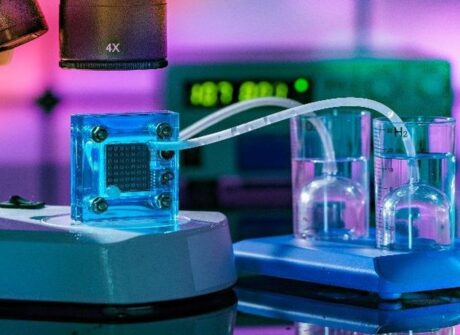 A contract for an industrial project which would be the first large green hydrogen project in the country was being negotiated in May 2022 by the Namibian government and the preferred bidder, Hyphen Hydrogen Energy. This company is a joint venture between the British Virgin Island registered investment and infrastructure company Nicholas Holdings and Enertrag South Africa, a subsidiary of German renewable energy company. Enertrag which operates more than one thousand wind turbines around the world.
According to Obeth M Kandjoze, the chair of Namibia’s Green Hydrogen Council, the first phase of the project, which would use both solar and wind power, is expected to enter production in 2026 and generate a 2 GW capacity to produce 120,000 tons of green hydrogen for conversion into green ammonia, at a cost of US 4.4 billion.
Further phases in the late 2020s, will expand the capacity to 5 GW and 3 GW of electrolysed capacity, increasing the combined investment to $ 9.4 billion and hydrogen production to 300,000 tons annually for regional and global markets. That figure compares with Namibia’s annual GDP of $10.7 billion. 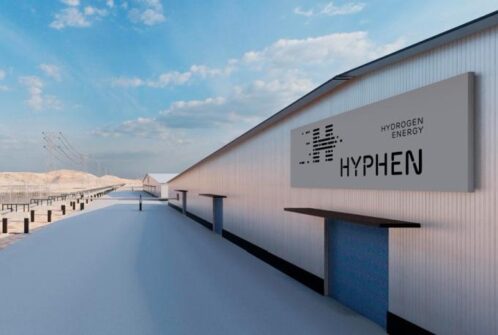 Hyphen’s project is part of the Southern Corridor Development Initiative (SCDI) portfolio of projects. About 4,000 km² were allocated for this project which will be entirely financed by Hyphen. The SDCI comprises a 26,000 km2 area between Lüderitz and Orangemund, on the Southern coast. It has the potential to produce 3 million tons of green hydrogen which would represent the equivalent of one third of the EU’s total import needs by 2030.
The adjudication process was made with the assistance of the Colorado-based NREL national laboratory of the US government and experts appointed by the EU Global Technical Assistance Facility on Global Energy. Once the necessary feasibility processes are concluded, Hyphen will have the rights to the project for 40 years.
Yet, Hyphen’s project is only a start, the beginning of Namibia’s big hydrogen adventure. According to preliminary market estimates by the World Bank, the Kharas region could produce 2 million tons of ammonia, generate $ 800 m. in revenue and house generation assets of 5 GW at less than 3 US cents per kwh.
According to Namibia’s President Hage Geingob, Namibia has identified four potential Hydrogen Valleys across the country. The Hyphen project is just chapter one of the development of the first one: the SCDI.
Namibia’s potential has already attracted many partners. 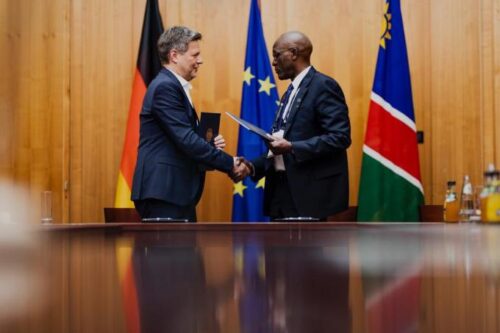 On the 11 April 2022, Robert Halbeck, the German Minister of economic affairs and climatic action and Thomas K Alweendoo, the Namibian Minister of Mines and Energy, signed a joint declaration of intent. Germany will finance hydrogen pilot plants up to EUR 30 million in addition to 200 scholarships and the development of a national green hydrogen strategy for EUR 10 m.
In September 2021, beside Hyphen, Namibia received eight more commercial proposals to develop large green hydrogen projects namely from Sasol, Fortescue Future Industries and Tumoneni. By May 2022, the Windhoek government had received 31 bids to develop pilot plants and three to develop the national green hydrogen strategy.
In November 2021, Namibia signed an agreement with the port of Rotterdam which plans to become the Green Hydrogen export hub for Europe and the rest of the world and another deal with Belgium to promote and develop cooperation in the field of green hydrogen, which was sealed after President Hage Geingob’s visit to the Benelux
in mid-February 2022. 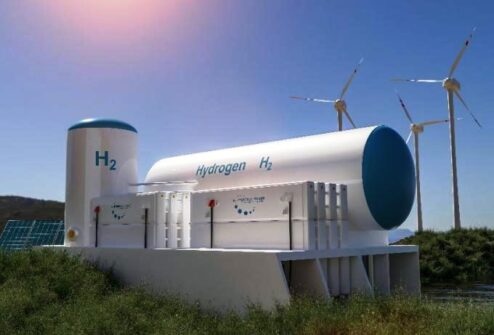 The first project to come on stream is a pilot plant which will be built by Namibia’s Ohlthaver & List Group and CMB Tech, a subsidiary of the Compagnie maritime belge shipowner (CMB), and which will start production by end 2023. The project which represents an investment of US $ 18 million will be developed by a joint venture called Clean Energy in the Erongo region. Depending on the results of the demonstration plant, a larger production plant will be built in a second phase. The aim is to produce hydrogen from solar power and distribute the fuel to trucks, locomotives, mining equipment and ships.
The government plans to create a National Green Hydrogen Research Institute (NGHRI) with centres to carry out studies on clean hydrogen production and storage, new materials, hydrogen fuel cell technology, hydrogen use, etc. However, Kennedy Chege, researcher on the Mineral Law in Africa at the University of Cape Town warns that the amount of water required to produce hydrogen in such a dry country could be a challenge. Desalination and the cost of electrolysis used to produce hydrogen can be expensive, which could erode the competitiveness of Namibian green hydrogen, says Chege. (Photo: 123rf.com)