It is difficult to be a Church in a place of violence and instability. “We are few but not invisible”. We speak with Mons. George Bugeja,
Bishop of Tripoli.

Libya is a country that lives between chaos and instability. With the killing of Gaddafi in October 2011, the country entered a spiral of violence. It is a country divided between the authority of the government of Tripoli led by Fayez Al Serraj and the militias of the strong man of Benghazi, Khalifa Haftar. In between the balance of power is associated with influential local tribes and, of course, the cluttering presence of many external actors who have no intention of losing the opportunity to gain possession of the great riches of the country and the control of its share on the geopolitical chessboard of the Mediterranean.
It is in this framework, with its sad and dark background, that the Catholic Church continues to be present. “We may be few but we are not invisible”, the Vicar of Tripoli, Mons. Bugeja tells us. We are just a small community surviving in the midst of so much violence and insecurity”. 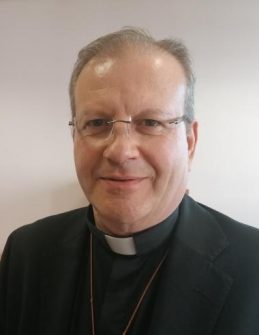 The small whitewashed church where all can meet the Maltese Bishop in his Friars Minor habit, is, in fact, dedicated to St. Francis. It is located in the Dahra quarter, right in the centre of Tripoli. It is the only one that has been active in the Libyan capital since the time of Gaddafi’s  ‘green revolution’ when  – in 1969 – the Rais took power with a coup d’état under the banner of national socialism and the expulsion of foreigners. The property of the Church was confiscated, the houses of prayer (39 in the city) were closed, including the Sacred Heart Cathedral which, after some architectural changes, was fitted for Islamic worship; today it is the great mosque dominating Algeria square.
Monsignor Bugeja, 58, has been Vicar Apostolic of Tripoli since 2017. He states: “we are a Christian community composed entirely of around three thousand foreigners out of a population of 6.3 million. They are mostly Filipinos employed as nurses in the hospitals, and Africans mostly from Nigeria and Ghana, as well as a few from South Sudan.
To assist them here in Tripoli, there is just myself, another Franciscan friar, Friar Magdy Helmi, and eight Sisters of Mother Teresa, working as volunteers in two government institutes at the service of Libyan citizens with mental illnesses”. 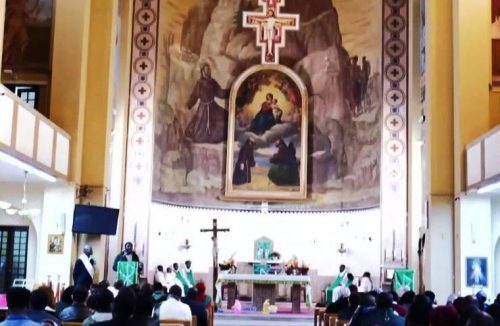 “In Benghazi, the See of the other vicariate – the bishop continues – the situation is even more precarious: the church was destroyed when the area was bombed to drive out Isis which had set up its headquarters there. All the religious Sisters left; there are now only two Friars, as well as one in Al Beida close by.
The community is formed by a scattering of Filipinos and Sub-Saharan Africans who gather for worship in a small room at the Children’s Hospital. There we have to start again from scratch”.
“Our activities are all carried out within the confines of the parish structures. We have the Sunday liturgy on Fridays, a holy day for Moslems. We have two masses, one for the Filipinos and one for the other communities, both of which are attended by from four to five hundred of the faithful. Attendance though, depends on the situation in the city; when there are clashes in the surrounding area, people lock themselves in their houses. In the afternoon there are catechism lessons; the children are taught by the Sisters while the adults are accompanied by trained lay people, helped by myself. The Africans also organise Bible study meetings, choir practice and also get together in order to organise community help for people in particular need: they know well the various situations and, when necessary, they know they can come to me to ask for help. On Fridays we also have a small independent market where clothes and food are available”. 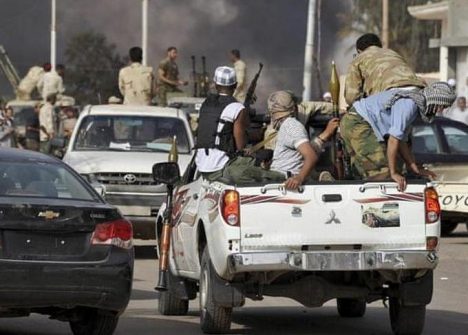 Mons. Budeja tells us it is difficult to make a plan of accompaniment since people are continually changing. “ People come here to work and remain here only as long as the work contract lasts. Even those with fairly constant work, such as the Filipino nurses, leave after a few years, not to mention all the people in transit who want to reach Europe. Instability is the norm. There are not many families and they are often divided with the father in Tripoli and the mother at home in their own country. Nevertheless, despite everything, each month we have six or seven baptisms of African children! However, when the children reach the age of five or six, the parents generally send them home to the grandparents, since in Libya they would have to attend a fee-paying school”.It is a situation with serious discomforts that must be borne. The Bishop of Tripoli comments: “ Naturally, many decide to leave. Up to a few years ago, our churches were attended by Poles, South Koreans, Italians, Maltese, Arabs and others, and the celebrations were held over the three days of the week-end; otherwise there would not have been room for everyone.”
” Today things are different but life in the city centre goes on quite normally; offices and schools remain open even when there are clashes in the outskirts. Yes, we have to put up with a lot of trouble. Electrical power is cut off for eight or twelve hours a day, especially in the summer when the temperature reaches 50°. There are many people with enormous problems both economic and in the field of human rights”. 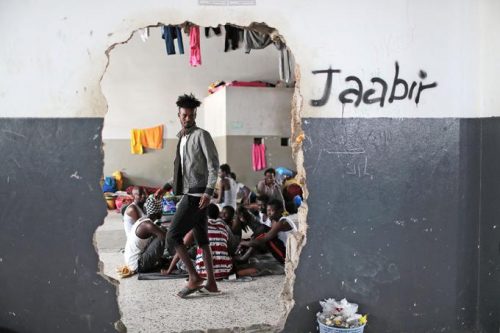 Libya. Migrants gather at the Anti-illegal immigration Agency in Tripoli.

What is the Church doing for them? “We have a small Caritas office with a lay woman in charge. It is open on Tuesdays and Fridays and we use it to lend a hand to anyone who comes to us. Those coming to ask for help are mostly Eritrean Christians and Sudanese Moslems. If they are not registered with the UNHCR (United Nations High Commissioner for Refugees) we help them to do so, or else we send them to the International Organisation for Migrants (IOM) if they want to return to their own countries. We also have a small first-aid clinic where a woman doctor and two nurses work. When we have serious cases, we avail of some NGOs through which we have the sick persons admitted to hospital. When we find cases of unattached women with difficult pregnancies, we can always count on the help of the Danish Refugee Council. From the point of view of material aid, we try to help people pay the rent or, with the help of Caritas Italiana, we help students with their school fees. We have always to be careful where money is concerned as some may use it to pay human traffickers, expecting to be brought to Europe”.It is estimated that there are 200,000 migrants waiting to travel from Libya to Europe. In the past three years, more than 40,000 passed through the refugee camps where they suffered violence and torture. “Some years ago, our ‘Social Service’ was authorised to visit people confined to the camps and to those detained in the prisons to distribute food and pray together with them. This is no longer possible. Nevertheless, among our parishioners there are some citizens of Sub-Saharan Africa who have been in those detention centres and succeeded in getting away from them, either because they paid money or were sick. Now those people who were traumatised, see the Church as a safe place where they are welcomed and protected”. 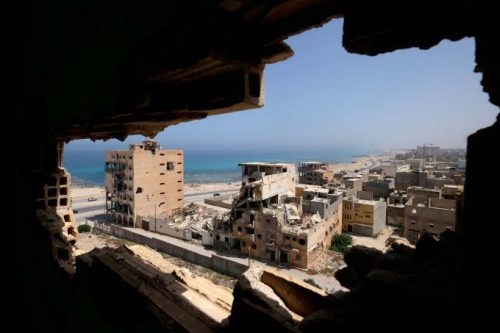 The Bishop of Tripoli concludes: “ The original sin of this country is that it is so rich! Everyone wants their share of the money. The Libyans would like to find a political solution by themselves but the foreign powers refuse to yield. The problem is that the international agreements are often ineffective. The embargo is a farce: arms are still coming undisturbed, while Europe does not speak with one voice but proceeds in a non-uniform manner with each country intent upon pursuing its own interests. The UN is trying to mediate between the factions but concrete results will take a long time. Nevertheless, I am hopeful. Peace will come and we will be here to welcome it”.